Free life coaching to kids in Georgia is now a reality, thanks to Chess Champ Orrin Hudson.

Former gang member Orrin Hudson is now working to help save children from a life of crime by giving them education that is worth a lifetime. Chess expert Orrin Hudson offers free leadership coaching to kids, using chess as a workable solution to solving life problems, and to avoid poverty, gangs, drugs and alcohol, as detailed in this story. 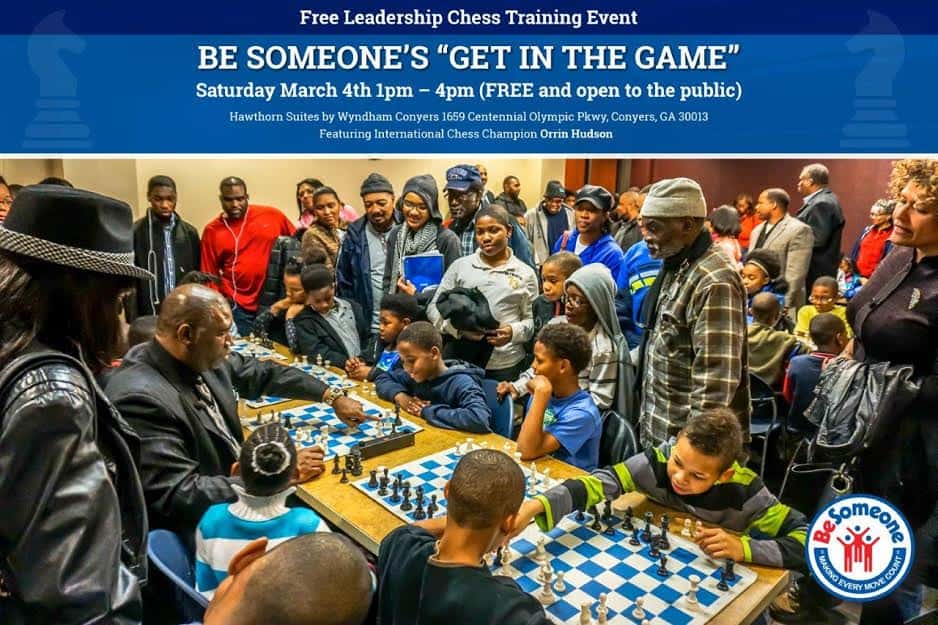 Motivational speaker, youth mentor and anti-violence activist Orrin “Checkmate” Hudson is setting up a life-size chessboard in Conyers to bring life lessons to students in metro Atlanta and break the cycle of poverty, crime and violence.

Orrin Hudson will deliver his unique presentation at the Hawthorn Suites Wyndham next Saturday, March 4, from 1 p.m. to 4 p.m. Participation in the program is free. The session, called “Get in the Game,” will outline specific strategies that help students put “brains before bullets.” And to choose peace instead of violence.

“By learning to out-think the competition, these young people will learn to respect others, think before they make dangerous moves, and give more than they take,” Hudson said. At the workshop, which will be emceed by Diane Daniels Adoma, Hudson will teach a new currency to young people called KASH (Knowledge, Attitude, Skills, Habits), and show them how it can change their lives for the better.

Orrin Hudson, founder of Be Someone Inc. and an Air Force veteran and law enforcement officer, has been awarded the prestigious FBI Director’s Community Leader Award. Since 2000, his program has brought 50,000 students the life-affirming message of “Peace, Positivity and Purpose.”

Orrin Hudson says he was “in a lot of trouble” as a teenager and owes his life to a Birmingham, Ala., teacher who introduced him to chess and mentored him in the game for four years.

Visit www.besomeone.org for more information on Be Someone Inc.

This content is copyright 2017, Be Someone dot Org, Hollywood Sentinel, all rights reserved. The offices of Hollywood Sentinel do not endorse any advertising that may be found on or in connection with this story nor make any claims associated with the content of the story herein.