According to a report by Jesse Ventura, the recent BP Gulf Oil Spill was no accident, but a deliberate attempt to depopulate the Gulf coast area, motivated by profit.

Ventura’s investigations reveal that the dispersant used to clean up the oil spill (Corexit) contains many deadly chemicals, like cyanide and mercury for example. He claims that Corexit does not disperse the oil, as claimed, but simply breaks it up into smaller particles which sink to the seabed. 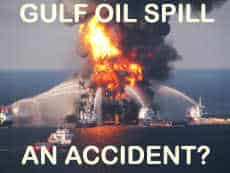 News of the health hazards following this oil spill have been covered in depth on sites like Rense.com and of course here on Newsblaze.

A question many will ask is why would anyone purposely create an oil spill of this magnitude?

The Ventura video would seem to offer some answers to this question, if the information provided is accurate, and one name appears that is no stranger to us, or dark deals, and that is Halliburton.

Halliburton, as we all know, was once run by Dick Cheney, and this company “picked-up” some very lucrative deals during the war in Iraq. Cheney supposedly had no connections with this company when he took up his post as Vice President to George Bush, and we are expected to believe that any contracts awarded to Halliburton were not influenced by its former boss (maybe Santa is real as well?)

If the video is to be believed, Halliburton took control of a company (Boots and Coots) involved in cleaning up oil spills, just 11 days before the “accident” happened. Apparently, the former CEO of BP (Tony Hayward) also sold one third of his shares in BP a few weeks prior to this event. A coincidence?

Clearly, a considerable amount of money would have been made from buying/selling certain shares at the right time, not to mention the profits available to the clean up company.

Apart from the health aspect of the oil spill, there is some speculation that this may have had some affect on the Gulf Stream and its influence on temperatures further north. No one can deny that the temperatures in the Northern hemisphere have been much lower than usual (especially in Britain), which is exactly what would happen if the Gulf Stream was to stop functioning in its usual manner.

This may all seem like one of those fantastic conspiracy theories we are used to seeing on the internet, and not helped by the “dramatic” way in which the video is presented. But there is certainly sufficient information provided to make you think that something is not quite right and the presence of Halliburton in the equation only supports that concern.

However, watch the video for yourself and then decide whether there is more to this than meets the eye.