The recent news that Birmingham born British conductor Sir Edward Downes and his wife Lady Joan chose to end their lives together by assisted suicide at the Dignitas clinic in Zurich, is sure to raise new questions about the rights and wrongs of such an action.

Although most suicides are as a result of some emotional trauma in a person’s life, Sir Edward and his wife clearly gave this decision a great deal of thought.

Sir Edward Downes was 85 years old, virtually blind and had lost some of his hearing. His wife was 74 and had been suffering from cancer. A family statement read “After 54 happy years together, they decided to end their own lives rather than continue to struggle with serious health problems…. They both lived life to the full and considered themselves to be extremely lucky to have lived such rewarding lives, both professionally and personally.”

There are perhaps many thousands (or millions) of people who would also prefer a more peaceful end to their lives, but because assisted suicide is illegal in most countries, or because they lack the tremendous courage it requires to take such action, they continue a life that no longer gives them any satisfaction. 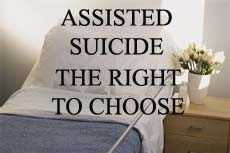 Many people believe in the saying “It’s not how long you live, but how you live that is important.” Certainly, if you are able to maintain a reasonable physical and mental level as you grow old, hang on as long as you can. But if that is not the case and each day brings more pain and suffering (with absolutely no chance of improvement), it is understandable that a person may ask “what’s the point?”

Assisted suicide is not something that should be made too easy to obtain, but I believe it should be made available to those who feel the quality of their lives have fallen beyond what they consider an acceptable level. Perhaps people over a certain age with incurable diseases, or others with a terminal condition who wish to avoid the last few days, weeks or months of pain?

Surely it is wrong for a court to decide that a person must suffer physical and mental torture to the very end, if they don’t want to. Would it not be more humane to allow them to avoid unnecessary suffering, if that request is made? Should our compassion be limited to our pets, who already receive this option?

The subject of assisted suicide is certainly something that requires a lot of thought, and not just from a legal and moral perspective. Hopefully, other countries will make this a legal option for some, but make sure that strict guidelines are followed.

Obviously, Sir Edward Downes and his wife felt that time was short, and rather than endure the additional pain of being separated, chose to end their lives at the same time. Some may be critical of their decision, but you have to respect their courage and the love they had for each other, a love that brought them 54 years of happiness.