A British man, Akmal Shaikh, was executed in China this morning for smuggling four kilos of heroin into China.

Shaikh was arrested at Urumqi airport in September 2007, where the drugs were found in a suitcase. Anyone caught carrying more than 50g of heroin into China faces the death penalty.

China, like many other countries, takes drug smuggling very seriously and are not the only country that enforce a death penalty for this offence.

Shaikh’s family have insisted that the 53 year old father of three was suffering from Bipolar disorder and unknowingly carried the drugs into China for a gang, who allegedly suggested that he could pursue a singing career there.

Whilst Shaikh’s symptoms did appear to resemble those seen for a person suffering from Bipolar disorder, they could just as easily be attributed to foolishness. 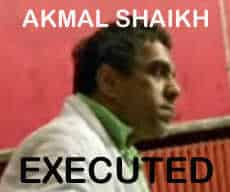 Although Shaikh’s family and certain politicians (like Gordon Brown and David Miliband) were shocked at China’s decision to go ahead with the execution, there is a strong feeling with the general public that the sentence was “legal” according to Chinese laws.

As some members of the public have pointed out, if Shaikh’s family were aware of some mental illness, why didn’t they make more effort to help him sooner?

We have seen similar situations in the past, where individuals have been caught bringing drugs into a country that has a death penalty, and the authorities have been bombarded with pleas that the defendant was duped or unaware that they were carrying any drugs.

In some cases those caught were genuinely unaware that drugs were planted in their luggage, but this only applies to a relatively small number. In the majority of situations, the people involved were fully aware of the risks, but chose to take a chance.

Whether Akmal Shaikh knew what he was doing, or was simply tricked into carrying the drugs because of a mental illness, we will probably never know for sure.

What we have to accept is that China has strict laws against drug smuggling, and whether we agree with them or not, they must be respected. Whilst Britain has a much softer approach to drug dealing, we should not expect everyone to adopt the same approach.

Although many disagree with the death penalty, some feel it is acceptable for those who commit certain murders. However, it is easy to forget that drugs also kill and the quantity of heroin carried by Shaikh was apparently capable of killing more than 26,000 people.

It is of course always tragic when a life is taken, especially if that person truly did not know what they were doing.

Although nothing can change the outcome of this incident, it will certainly act as a powerful reminder to those considering this option as a way of making money, and a very good message to the potentially innocent victims to be more careful with their baggage.

For the countries that choose the ultimate penalty for drug smugglers, they must ensure that this penalty acts as an effective deterrent. This unfortunately means a limited amount of flexibility and the risk that some innocent victims will also be affected.

China, knowing that the execution would create political tension, made a brave decision in rejecting any leniency. Their decision has sent a clear message to others that their laws are not for bending and this could help save the lives of many thousands of their people in the future. Maybe other countries should take a similar stance on the war against drugs?