What happened to a highly gifted math and science student Ian Burnet, 22? Ian paid New York City a visit over the holidays, arriving by bus the day after Christmas, and rendezvousing with some female friends (at an apartment) in a Harlem neighborhood of Manhattan (139th Street and Riverside Drive). Little has been said in the press about the nature of his visit to NYC or the friends he was meeting, other than he seemed to be having a ‘horrible time’ (WABC).

It wasn’t mentioned who noticed Ian wasn’t having such a good holiday, but it would have to be either the friends, or maybe it was contained in one of his texts to his parents or a text to another friend living in Virginia. This ‘horrible time’ issue caught my eye as of possible significance. It’s hard to not have a good time in NYC, unless something major distracts you.

That major distraction could be an important clue or key to Ian Burnet’s sudden disappearance, late in the afternoon of December 30th (this was a Friday and was the eve to New Year’s Eve). Another primary source of puzzlement (when I give consideration to the set of facts we’ve been given), is that Ian didn’t say where he was heading to when he left the apartment. 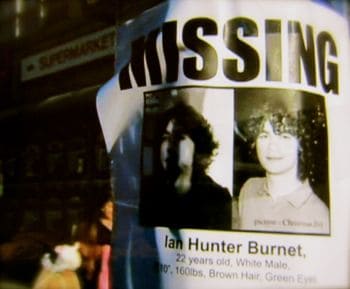 Maybe he didn’t know where he was going to? Maybe he was just going to walk around NYC and explore its many secret nicks and crannies? That’s not so unusual. There’s a lot you can learn while walking around. Another item that’s not so unusual, is the fact that Ian didn’t take his cell phone with him. His father, Mark Burnet, commented that he didn’t always take his cell phone with him when he went out.

Ian had his driver’s license and credit card with him, but his credit card has been inactive since December 30th. It’s been reported that a visit to a Harlem Burger King was (on the day he goes missing) accounts for the last known activity on the card. But where was he going to that day? Did Ian have any type of agenda for his NYC visit, such as museums, movies, restaurants, or Broadway shows? Anything at all? This is odd, if he didn’t!

Ian’s talents in math and science landed him a full scholarship to Virginia Commonwealth University. How about the Museum of Natural History? Did he have any desire to pay this legendary New York tourist institution a visit? Lots of science exhibits there! It’s been said he was in good spirits over the holidays, but did that change after he left on his trip? This appears to be the case (from the scant evidence we’ve been given so far).

And then there’s even another possibility. Was the nature of his visit possibly romantic? This hasn’t been mentioned, but who were these lady friends he was meeting? Why are they remaining anonymous in the news? Are they being questioned by the NYPD? And did Ian travel to NYC with his roommate? Nothing much has been mentioned about this roommate (who got a text from Ian at 4 PM on the 30th).

Lots of mystery here. NYC has swallowed up Ian Burnet. Ian wasn’t a partier either. Neither drugs nor alcohol had made their dreadful incursions on his promising young life. No, it was something else entirely. Foul play? No evidence of this (yet) either. Did Ian become depressed during his trip? The Midnight Cowboy City has been known to have this effect on some people. Lots of good resources on the web, if you want to follow this case (Facebook’s Find Ian Burnet and FindIanBurnet.com.).