After initially being refused parole, justice minister Jack Straw has finally agreed that Ronnie Biggs can be released from prison tomorrow on “compassionate grounds”

Great train robber Biggs, 79, has been suffering from severe pneumonia and is not expected to improve. Various reports seem to indicate that his newly acquired freedom will be short lived.

Ronnie Biggs was part of a gang that held up a Glasgow to London train in 1963, collecting a haul of Pounds 2.6 million in used banknotes, and received a 30 year sentence for his part in the robbery. 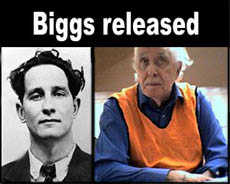 However, after 15 months in Wandsworth prison, he managed to escape. Initially he went into hiding in Australia before eventually settling in Brazil. In 2001 he voluntarily returned to the UK (for medical reasons) and continued his sentence in Belmarsh high-security prison, until being moved to a specialist medical unit for elderly and infirm prisoners at Norwich prison.

Although the robbery was one of the largest at the time, no one was killed in the hold-up, but the train driver received a blow to his head.

Technically, Biggs has only served around half of his original sentence (taking into account time off for “good behaviour”?), but with his self-enforced captivity in Brazil, age, health condition and the fact that a similar offence today would not attract such a long penalty, he has probably paid his debt to society in full.

Jack Straw originally refused Biggs parole because he considered him “wholly unrepentant.” Hopefully, Ronnie Biggs will have time to reflect on his life and complete the wish he made in 2001 to “walk into a Margate pub as an Englishman and buy a pint of bitter.”

With so many people committing much worse crimes nowadays and protected by some legal loophole, I doubt if too many will begrudge Biggs his early release, or that pint of bitter in the short time remaining.