Have you ever heard Shankar Family & Friends? Not many have. It was released in the U.S. on October 7, 1974, on George Harrison’s label Dark Horse, to a lukewarm response. It’s been mostly out of print for some time, but was included on the 2010 box set Collaborations. This is how I came across it.

Ravi Shankar passed away last Tuesday, December 11, 2012; I perceived the public response to his death was at best subdued, although Ravi Shankar is one of the most important artists that’s ever lived. With the senseless gun violence shocking the airwaves yesterday, I had to turn the news off, and listen to a man of peace, love, and wisdom, and the infinite discipline and talent that is Ravi Shankar. 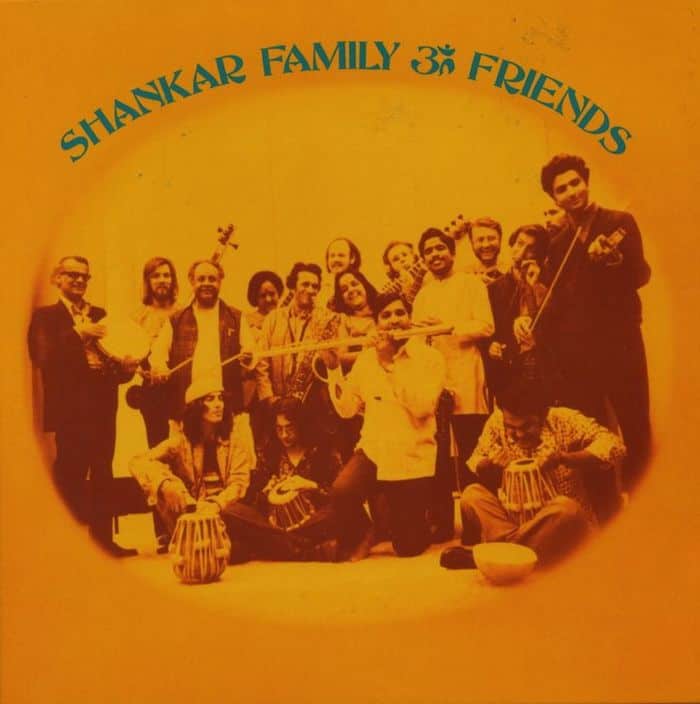 I have many of his records, but prefer Ravi In Celebration, a four CD set put together by George Harrison in 1995, on his Dark Horse label also. It has wonderful liner notes, which tell you much of Ravi’s life and career; unfortunately, In Celebration is out of print, but if you can get your hands on it, I’d advise you to do so.

I use a lot of Ravi’s records as background music for when I’m writing, because it inspires me and soothes me, so I can concentrate on what I’m doing. Ravi’s discipline and concentration is most present in every note he plays.

I zero in on Shankar Family & Friends, since so many people have missed it, and yet it’s such an interesting collection of songs, partially Eastern or Indian, blended with George’s Pop/Rock Western vibe. I hear Ravi himself took a lot of flack, with claims he’d compromised his Indian purity too much, but I love its eclecticism. It is commercial to me, but never was able to catch on in the UK or in the US, for that matter. I Am Missing You is very Beatle-esque (George provides the arrangement) and appropriate for radio airplay, I do sense.

I suppose, my real purpose in penning a few words about this long lost treasure from the mid-1970s, is to garner a renewed enthusiasm for the record (With a Little Help From My Friends), so that a new generation of music listeners can hear it and try to learn anew about Indian music, the instruments (Santoor, Sarod, Sangi, Sitar, Shahnai, Tablas, or Jal Tarang), the structure of Ragas, and the ways a consortium of musicians play together so harmoniously. Filled as they are with grace and love for their art and for each other, you have musicians working together towards the same end, a beautiful LP (which is what they achieved).

So turn that TV blaring horrid violence and hatred off; get with the program, my friend! Somehow, I don’t know how, get yourself a copy of Shankar Family & Friends. Lakshmi Shankar (Ravi was her brother-in-law) handles most of the lead vocals gracefully (such as I Am Missing You, Kahan gayelava Shyam salone, and on Supane me aye preetam sainya).

You’ll need to go through the musicians and instruments used on the record with a fine tooth comb, I’ll not do that here. I’m just going after the general spirit and ambience of the songs; I’m simply a cheerleader for this forgotten album, and want to resurrect it from the dead (strong metaphor, but its apparent moribund-cie is intolerable!).

Besides I Am Missing You, which I believe should become a number one record (as a fitting tribute to Ravi), my favorite track is Jaya Jagadish Hare (4:52), sung by Jitendra Abhisheki. This is a traditional Sanskrit prayer or song and was written by the poet Jaideva of Bengal in the early twelfth century. (Ravi and George may have modified it quite a bit, but I don’t know just how?)

The song extols the majesty of Vishnu in telling of ten different incarnations that he’d take on (fish, tortoise, boar, Lion-man, dwarf, Buddha, and other guises). Anyway, what I like about it most, is the call and response effect used, where the female chorus responds with: O Keshava, Lord of the World! All Victory to thee! (in Sanskrit, of course).

The rhythm is snappy and the sitars resound and echo against the enchanting story told of the multiple incarnations of Krishna. I may be hearing some bells, clapper, or shaker (against busy tablas) in there also, which gives it a jingly quality. Infinitely singable!

Side two is vaguely a ballet, composed by Ravi right in the A & M Studios in Los Angeles, which commenced in the spring of 1973, and continued until the end of the year. The tracks were finished up at George Harrison’s home studio at Friar Park. The plot is described by Ravi in some lovely illustrated liner notes (included with the box set Collaborations). To word it with brevity, a young innocent couple of lovers are seduced by a corrupt older couple, and have to work their way back to a morsel of understanding and enlightenment.

The three sections, rightly so, are Dream, Nightmare, and Dawn. The music, which should be played over many times, mirrors these three universal moods. I favor the Overture, which has a pleasing high-end, lyrical Raga going on within. Lots of flutes and high note strings here, with a crisp rhythm before it morphs into Festivity & Joy, which echoes the happy cadence and dance sequence (me thinks) of the young lovers. I will say, I suspect the corruption interlude may be a metaphor for the Western poisoning and domination of the East.

This is just a suspicion, but it works, if you think maybe Ravi could countermand criticism of his Western compromises in music, as an ironic commentary of art, a mere mirror of political Imperialism, as expressed so grandly by Mahatma Gandhi (a hero of Ravi’s), who tried so hard to purge India of the imperial scourge of Great Britain. Just a theory of mine, but I sense that Ravi believed, in the long run, he could more change the West than the West could change India, since India’s traditions of art had endured a great deal longer than the West’s had.

An example is, the Raga form has been around for thousands of years, whereas the Symphony form has only been here for a few hundred years. Think about the enormous influence Ravi had on George; it may amount to more influence than John, Paul, and Ringo had on George. Yea, this is a rock-solid assessment! So turn off your TV set, get rid of all that American violence, instead embrace peace and love, you can get it perfectly through this record. I am missing you, O Krishna, Where are you? Though I can’t see you, I hear your flute all the while. Please come wipe my tears and make me smile.