The True Story About Iron Man 3

In ‘Iron Man 3,’ The main character, Tony Stark finds himself facing his most powerful enemy. Yet, when he embarks on a harrowing quest to find those responsible for destroying his private world, along the way, he discovers the answer to the question that has secretly haunted him; “Does the man make the suit or does the suit make the man?” There is one man that can provide that answer. For one, he is one of the power players behind the production of the film – Mr. Shawn A. Sequeira, along with Disney, Marvel, and Paramount, and secondly, he even has an Iron Man Video tribute about him made (see the video at the bottom of this article), which reveals that – with Shawn A. Sequeira, the man does indeed make the suit. In other words, in a town where smoke and mirrors is the norm, Shawn Sequeira is the real deal, who makes things happen, and he doesn’t need a dog and pony show to talk about doing it – he just does it.

Shawn A. Sequeira is the owner of a company called SAS Movies, and he hails from a small town in central Kentucky, where people leave their front doors unlocked and where Daisy Dukes are not just a fashion trend – they are a way of life in the land of rolling prairies that give the American Heartland its name. Shawn A. Sequeira left this world of small town folk and came to Hollywood with a unique vision to change the values of the film industry – one person at a time. 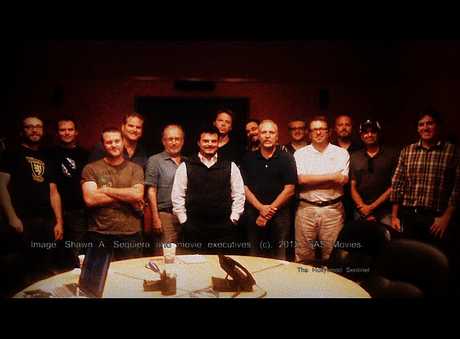 However, bringing Christian values to an overall secular industry that often shows bad deeds going unpunished, was not taken too kindly by some of the major film studios. And yet Mr. Shawn A. Sequeira (SAS), shortly infiltrated the industry by taking on twenty seven current feature films without any desire to chase the spotlight that many in Hollywood so desperately crave. As a result, SAS Movies has become one of the most popular silent investors in new motion pictures, without being dependent on any major studio. He also made it happen without any parlor tricks that many others who forgo faith for a following often resort to.

Big Toys of The Big Boys

Currently, SAS Movies is fully independent from all other major studios. Owning all of the studio amenities – with all of the current state of the art equipment needed in producing feature films – Shawn A. Sequeira has clearly set himself apart as a visionary in the business of silent investment. His services include top of the line equipment leasing from green screen, honey wagons, sounds stages, big rigs, and more, with A-list studio rental services and the ultimate actoral and below the line talent required in the successful production of feature films.

A New Leader if Motion Picture

SAS Movies is currently building an entire movie town in Kentucky, from the ground up, to bring feature films in to the state, where Shawn A. Sequeira says there is a new Sheriff in town who – unlike some Sheriffs in other cities – can’t be bought. With Shawn’s expansion into the heartland of Kentucky, he has moved to become a world leader in the production of motion pictures, as his studio will produce film, television and video for a fraction of the cost it may take elsewhere. As a result, many of the big Hollywood players are flocking to the new location for the best in state-of-the-art studio facilities, at a fraction of the cost of other studios. His art division has the highest end gear that money can buy, with his team able to build any set needed for any feature film, far lower than any other studio can offer.

Famed inventor, author, architect, and engineer Richard Buckminster Fuller stated that one can “never change things by fighting the existing reality. To change something,” he stated, one needs to “build a new model that makes the existing model obsolete.” Mr. Shawn A. Sequeira is brilliantly doing just that. He may not make Hollywood obsolete – but he is certainly winning a spiritual and Earthly battle with Hollywood he has endured by standing up for his Christian values and doing what he feels is right; bringing better values back in to the film industry. And this time – he’s not playing by Hollywood’s rules of the game – because he not only made up his own game – he owns it. If that’s not the mark of an Iron Man, than nothing is.