“At twelve O’clock a meeting round the table for a seance in the dark, with voices out of nowhere put on specially by the children for a lark.” Cry Baby Cry – The Beatles – The White Album “Charlie made the cover of Life!” Manson Family Members

I nervously crawled up to the front gate of this perpetually haunted and forevermore abandoned mansion at 10050 Cielo Drive. This was the Benedict Canyon ‘home’ of the most horrific murders of all time, the slaying of honey-blond Sharon Tate and four of her unfortunate cronies. It was August of 1979 and I was on a vacation visit to Los Angeles, hitting a handful of tourist sites, both on the up and up and of an underground ilk. 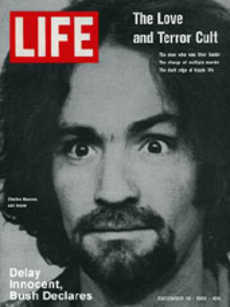 *(“The White Album” is blasting from the stereo as I type-duhh!) Forty years to the day (August 9th, 1969) dagger-bearing molls and a wired ‘Charlie’ programmed “Tex” Watson creepy-crawled the secluded cul-de-sac and viciously murdered five innocent, yet rich and famous fixtures of this glamour-scaped-pageant, that we know as dreamy Hollywood Cal. The next day after the murders, the rich and famous of Hollywood were terrified, frightened outta their bleedin’ wits!

Gun sales soared, as well as security systems of every variety. The privileged scrambled for cover, that they might not be the next victims of these crazy cult killers. Rumors spread like wildfire almost immediately – this was the drug-cult ritual murder of the century! Also, newspapers *(indeed, any publication, whether tabloid or otherwise legitimate) sold like sizzlin’ hotcakes at Flapjack Canyon! Why is this true, to such extremities, beyond the ken of even the wildest pipedream that imagination can muster up?

Indeed, this story has been vastly popular now for forty years straight. This is puzzling to me, as I thought it would have died down by now, or eventually slowly drifted into the mists of time. Now I am not so sure. For one thing, Sharon Tate came pretty close to being the grandest (& most endowed) sex symbol on the scene (& especially through the marquee looking glass after death) in the late 1960s. Her role as Jennifer North in “Valley Of The Dolls” had a lot to do with this. Also, Roman Polanski played a starring role in the invincible mystique of these repellent murders, what with “Rosemary’s Baby,” that seemed to subconsciously parallel the murders with its ‘Birth of the Devil’ plot. Then you throw in The Beatles’ “White Album,” The Beach Boys *(mainly Terry Melcher & Dennis Wilson), and a family of hippies who closely resembled many of our common youngsters, that frequently lived in communes all around our nation, in those tumultuous times.

One thing that always sticks with me in this case is the odd sociology or social psychology that makes the facts not fit, that makes them feel so contradictory. Two and two do not add up to four with little Charlie and his ‘band of gypsies.’ What certainly does not add up is that the ‘family members’ came from very average middle class backgrounds, and many were even well educated. Why would they then steal, strip, make love, & even kill innocent people (remember the plastic-faced mane chins) for a short con-punk? Why did they blindly follow Charlie, a habitual criminal, and randomly kill movie stars and the wealthy (Abby Folgers)? 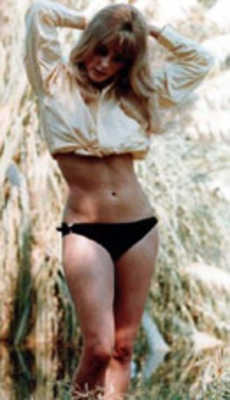 Naturally, let’s not forget the perplexing, yet persuasive personality of Charles Manson. Oddly enough, Charlie was a babe-magnet; why this is so, I must confess to my cluelessness? An easier way to explain this is that he was a very good con man. Manson learned this art in jail. When he got on the outside he used LSD *(this mind altering drug reduces ones’ judgment to dust) to control his family members. I saw Vincent Bugliosi speak at UT in 1975, and he explained the ins and outs of Charlie’s unusual personality characteristics, at length. This is one angle of this enduring story; and for me, Manson’s rap that he was just reflecting back on you (America), is a chillingly convincing one.

The violence, “Gunsmoke,” The War in Vietnam, racism, obsessive materialism, etc…was absorbed by ‘The Family,’ then they just reflected it back with their dastardly deeds. That’s true, Charlie was just a mirror to America, but it was the ‘Dark Side’, the Underbelly of America that he was reflecting back! That rap still haunts me to this day.

My favorite of the allegations regarding the significance of the Tate-LaBianca Murders, is that they brought the 1960s to a dramatic, halting conclusion; both symbolically and literally; the whole shooting match was over, in a sense the party was over, let’s all go home. The hippies and the ‘beautiful people’ were history by August 10, 1969, once everybody opened their dailies to these shocking headlines. This is, of course, absurd, yet this is just what the media was saying, and what they have continued to slap our faces with since that time.

I resent this, but I know that there is a modicum of truth to it. ‘The Family’ gave a bad name to our young people and to any lad who might sport a head of long hair *(such as myself, at that time). The Nixon Administration used Manson as a political tool to undermine the ‘youth culture.’ I must admit, this was an effective propaganda technique employed to make the ‘Hippies’ look like bad role models.

Forty years later, after much sifting, much processing of these heinous killings, we still drool over every detail of these mind-shattering murders. Charlie is still bombarded with groupie mail in the slammer, copies of “Helter Skelter” *(best selling True Crime book of all time) still fly off the shelf, people still scrutinize “The White Album” for clues about the ‘ritual massacre’ (I still do this), the movies and bikini snapshots of Sharon Tate are still put under a microscope, the parole hearings of Family Members are viewed by obsessed amateur detectives (all Americans as Beretta), the sickly sweet songs of Charles Manson are still sung by sickos, and the details of the grizzly murders are still reenacted in the imaginations of zillions of deadhead Americans!

CNN is still running with this story today, as if it just has happened only a few minutes ago! They are smart marketers! They realize that their audience will quadruple or quintuple! Even my quaint little piece will (probably) be read by millions of (good) FREAKS at Newsblaze and the SOP.org! “Look, John, you are on the cover of Life!” And Charlie will return to Haight Ashbury next week – YIPES, we better hit the hills (have eyes)!