One of the great pleasures of that much maligned notion of ‘chick flicks,’ is the discovery of the many ways in which women have uniquely coped with social and emotional survival issues during very contrasting cultural periods in time. And though My One And Only is presented as a coming of age biopic of the young George Hamilton before the star’s ascension to Hollywood celebrity, this quirky and affectionate road movie is clearly dedicated to the mother who both inspired and bewildered the budding writer turned actor.

Helmed by British director Richard Loncraine and lyrically visualized with bittersweet retro-elegance by Marco Pontecorvo, son of the late legendary Italian filmmaker Gillo Pontecorvo, My One And Only stars Renee Zellweger in an award worthy performance as George’s still stunning and glamorous southern belle mom, Anne Deveraux. A cultivated fashion plate mix of Mariyn Monroe and A Streetcar Named Desire’s Blanche Dubois, Anne is very much the pre-feminist womanchild feigning sexual empowerment, while into denial about the lot of 1950s conventions that still shackled females to caged bird social and economic dependence on men. 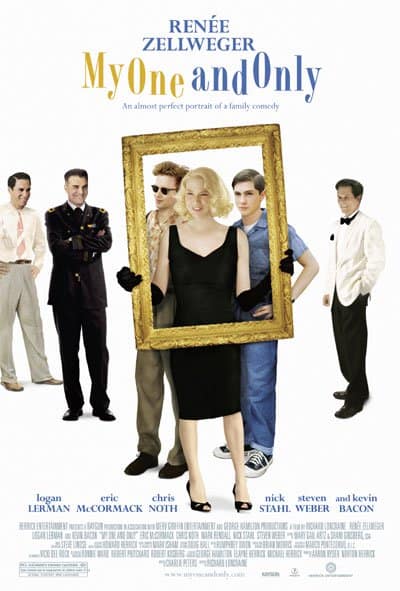 But when Anne has had her fill of her irresponsible wealthy serial womanizer spouse, band leader Dan Deveraux (born Hamilton), played mischievously by Kevin Bacon, she raids their safe deposit box on an impulse, lays down cash for a spanking new baby blue Cadillac Coupe de Ville, and flees their swanky NYC Upper West Side digs with her unconvinced and terminally sarcastic teenage sons in tow. Totally on to Mom’s ditzy ways, George (Logan Lerman) resents being forced to leave his father, while half-brother Robbie (Mark Rendall) who really never knew his own dad, doesn’t mind going along for the ride as long as he can embroider for the duration. This, at a time when the word gay meant nothing more than elated.

And Anne, who seems to have an ex-beau in every town, announces that they’re on a cross-country adventure to find a better husband. But with premeditated pit stops along the way in Boston, Pittsburgh, St. Louis and Phoenix, it becomes ever more apparent that old flames can get you seriously burned. And they range from two-timers, ripoff artists and potential rapists, to a violent military officer (Chris Noh), all of whom make their devilish dad look like Prince Charming in comparison.

Make no mistake, My One And Only is infused with heaps of sparkling humor and dazzling wit, though a kind of makeover stinging screwball blend served up raw. For along the way to the final destination of Hollywood and painfully inculcated self-awareness, Anne repeatedly endures the emotional assaults and humiliations that were the lot of women on their own back then, who lacked the protection of a man. Including the perceived public disgrace of a woman wandering about alone, who could easily be detained and charged with prostitution just for ordering a martini, a harsh reality likely to astonish younger females today. But the 20th century buried history of these barriers placed on those damaged women’s lives and any self-realization in its most basic sense, has now been coming to light in more films, including last year’s Revolutionary Road and Changeling.

And while biopics dedicated to living subjects, especially those, like George Hamilton, who participate directly in the actual production of these films, rarely achieve genuine candor and a sense of flawed yet remarkable human beings, it is to Hamilton’s credit that he scores on all these points. And while deferring to his mother as irritating yet inspirational centerpiece of his life story, Hamilton has created a magnificently impressive tribute, warts and all, to a woman who was no Thelma & Louise, but hardly the coy shrinking violet she was often pressured to be either.