A small town preacher finds himself giving up his faith in goodness after a murderous landowner kills his wife and child, only to return to exact revenge as a nameless bounty hunter, in “Avenging Angel,” a Hallmark Original Movie premiering Saturday July 7, 2007 (9/8 c). Kevin Sorbo, Cyntha Watros, Wings Hauser and Nick Chinlund star in an exciting western actioner about faith in humanity – lost and found. Dayna Devon, co-host of nationally syndicated celebrity news show “Extra!” cameos as a roughed-up saloon girl. The film is directed by veteran director and master stuntman David S. Cass, Sr., whose career began with stunt work for John Wayne’s 1963 western, “McClintock!” 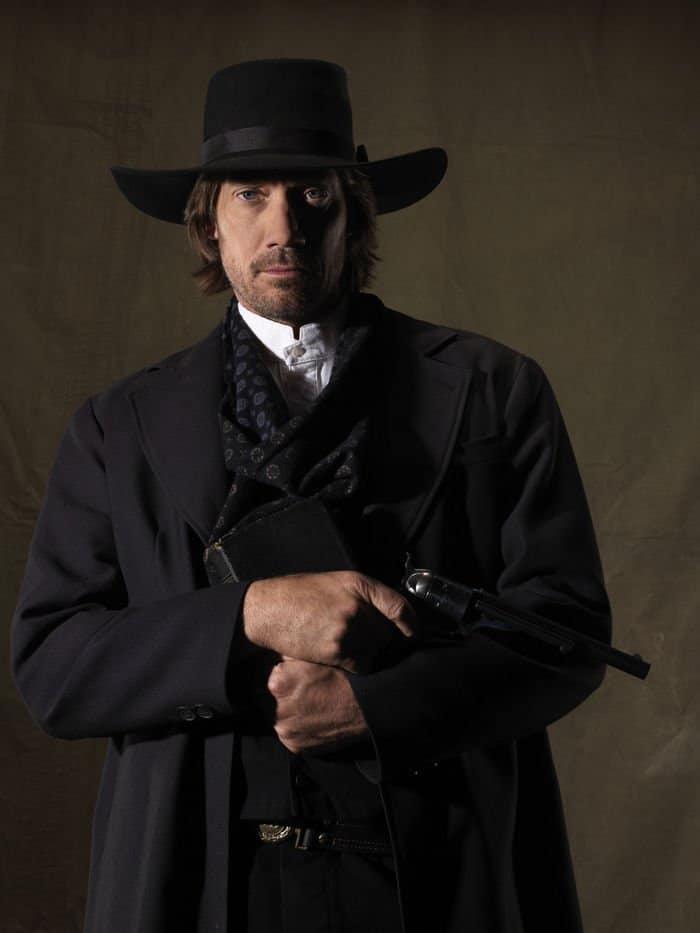 In a small western town in Texas hill country in 1875, landowner Col. Cusack (Hauser) sends his henchmen, led by Bob Quinn (Chinlund), to run off homesteaders – settlers who’ve purchased their property from Cusack, only to find he’s reneged on the deal and now claims they’re violating his land. The bad guys do his dirty work their way – with guns. The town’s preacher (Sorbo) tries to reason with the evildoers, only to lose his beloved wife and daughter by their hand.

The Preacher returns to the town three years later a changed man – a stone cold bounty hunter skilled at nabbing the worst of the worst. Quinn is still carrying out Cusack’s monstrous doings, but this time with the law on his side – he’s now the sheriff.

After a tumble with Quinn’s henchmen, the Preacher meets Maggie (Watros), a former saloon girl and prostitute with a young daughter, Amelia (Joey King), both of whom the Preacher takes a liking to. Quinn, who doesn’t recognize the town’s new guest, attempts to persuade him to put his skills to work for Cusack. But the bounty hunter has other plans, exacting revenge on the Colonel and his men, and clearing the way for a new life in his old home with a new family.

“Avenging Angel” is a presentation of Alpine Median and RHI Productions. Randy Pope and Lincoln Lageson are the producers. The director is David S. Cass, Sr., and William Sims Myers is the writer.