This David and Goliath story unravels against a backdrop of international intrigue, corrupt politicians, inept military command, all set on a stage covered in red dust from copper mines buried deep in the heart of the Congo. It’s thrilling, fascinating and peppered with the subverted humor that only the Irish can create. What is shocking about this film is that it is, in fact, a true story.

The Congolese mining industry is privately owned and, in September 1961, President Lumumba (Richard Lukunku) announces his intentions to nationalize this vastly lucrative industry. His efforts to enrich the lives of the local people are met with resistance and he is assassinated by General Tshombe (Danny Sapani), whose paymasters include the then President De Gaulle (Luc Van Gunderbeec).

To maintain control of the area, De Gaulle bankrolls thousands of French mercenaries, lead by Rene Faulques (Guillaume Canet), who trains his men to masquerade as security guards. 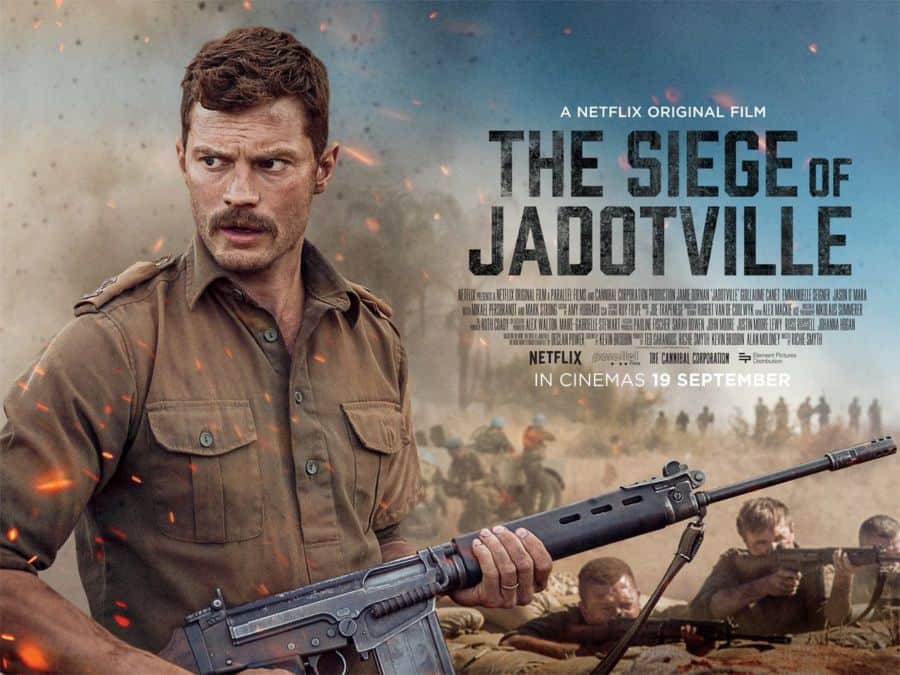 In response to the assassination of President Lumumba, the United Nations send the 25th Battalion ‘A’ Company, lead by unit commandant Pat Quinlan (Jamie Dornan), on a peacekeeping mission. The soldiers settle in an outpost in the mining town of Jadotville, cut off from civilization.

Meanwhile, the Secretary General of the United Nations gives military officer Conor O’Brien (Mark Strong) a mandate to prevent General Tshombe from becoming presumptive president. Showing a staggering lack of military knowledge, O’Brien decides to take the offensive. This gives Tshombe and his mercenaries an excuse to retaliate, which they are more than willing to do.

It is rare for action films to capture the emotional intensity of the people who are firing the bullets, but in this instance, that’s just what happens. The creeping feeling that the soldiers are being surrounded, minute by minute, is as real as the panic when they are blindsided by a sneak attack.

While conjuring up electrifying moments of near-miss mayhem, the filmmakers find a moment of wry humor when one of the soldiers jumps aboard an armed UN jeep and heads, full throttle, into the midst of the enemy. His commanding officer responds with a furious; “Cover that mad bastard!,” which is a wonderful moment of storytelling and also a homage to the indomitable spirit of the Irish.

When the battalion first arrive in Jadotville, they are told by the locals that they’re not welcome, which leads to a meeting between Quinlan and Faulques. The loaded conversation quickly turns into a pissing contest and the mercenary decides to remind the soldier that the Irish have never actually been in a war. Cleary, Monsieur Faulques has never been in an Irish pub on a Saturday evening, when a battle at the end of the night is absolutely compulsory.