The renowned scholar of Srimanta Sankardeva studies, Chutia, who was 98 years old, died in Jorhat Medical College hospital around 9:20 pm.

He was the Chief advisor and nine times “Padadhikar” of Srimanta Sankardeva Sangha, one of the biggest religious organizations in Assam. 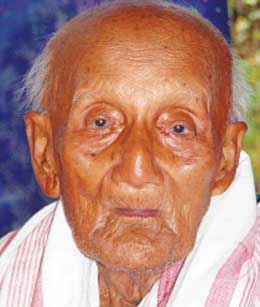 He is survived by three sons and four daughters.

Wikipedia says “The Quit India Movement (Hindi: Bhārat Chodo Āndolan), or the August Movement (August Kranti) was a civil disobedience movement launched in India in August 1942 in response to Mohandas Gandhi’s call for immediate independence. The All-India Congress Committee proclaimed a mass protest demanding what Gandhi called “an orderly British withdrawal” from India. The call for determined, but passive resistance appears in his call to Do or Die, issued on 8 August at the Gowalia Tank Maidan in Mumbai on year 1942.”