The Journalist fraternity of Assam in northeast India continues to protest against the State government for arresting a television journalist on charges of ‘maintaining unlawful relationship’ with banned armed outfits.

The media persons under various forums in Assam also urged the police to release Jaikhlong Brahma, a Kokrajhar based journalist of News Live satellite channel unconditionally.

Assam police claimed that Brahma, who was arrested on September 2 evening, was silently providing information about the movement of security personnel engaged in counter-insurgency operation to the militants of the National Democratic Front of Bodoland (IK Songbijit faction), which remained active in western Assam. After seizing Brahma’s laptop and two cell phones from his Kokrajhar residence, the police disclosed that he “instigated the militants for violent activities.”

A protest meeting organized by Journalists’ Action Committee Assam at Guwahati Press Club on September 4 also urged the Tarun Gogoi-led State government to release Brahma unconditionally. The participants demonstrated in front of the press club and they unanimously decided to send a factual report about Brahma’s arrest to the Committee to Protect Journalists (CPJ), Reporters Without Borders (RSF), International Federation of Journalists (IFJ) etc. 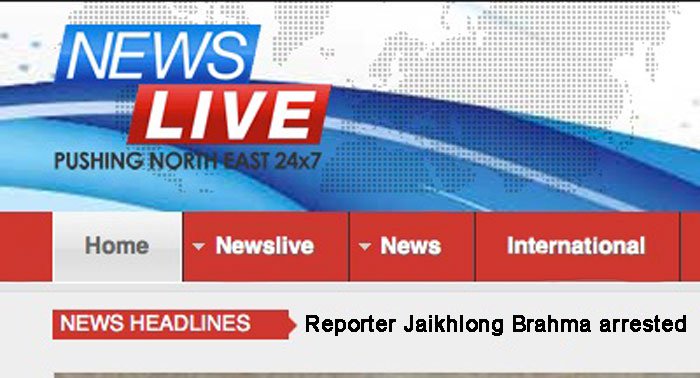 The IFJ also condemned the arrest of Brahma and demanded a fair investigation into the matter, with his immediate release. In a statement issued from Brussels, the IFJ also urged the government to ensure freedom of the media.

“We demand an immediate and fair investigation into the matter. The rights of the media to report are clear in India’s constitution and a journalist should not be arrested for simply reporting the information they disseminate,” quoting Jane Worthington, deputy director of IFJ Asia Pacific, the statement added.

Earlier the Electronic Media Forum Assam (EMFA) disclosed that the police were also looking for another Kokrajhar-based television journalist (Rinoy Basumatary of News Time Assam) with the same allegation. Rinoy’s house was already raided by the police and an arrest warrant was issued against the scribe.

The forum maintained its view that “a working journalist has the right to communicate and report about the insurgency related issues and for that reason (s)he must not be punished.” Reporting on insurgency helps prevent rumours spread by the militants from time to time, the forum claimed.

Lately, the State police changed its version of what happened regarding the arrest of Brahma. Assam police chief Khagen Sarma argued that Brahma was arrested not as a journalist, but as an individual who has maintained objectionable links with the militants for the past ten years.