Chandigarh – SaharaOne Television planned special Mata Ki Chowki episodes from 30th September at 10.30 PM. That is the first day of Navratri through the 10th day, i.e. Dusshera… As the nine days are important to all Mata devout believers, over these 10 days, one hour daily episode, which will also include Saturdays and Sundays. According to spokesman of Sahara One TV Mr. Ajinkya C. Mane, in these episodes are stories of all the nine avatars of Mata, plus the Mahisasur mytho., which finally culminates with Mahisasur sanhaar on the Dusserra. The idea is to have a regular episode of Mata Ki Chowki and then as a special episode for the viewers also tell them the story of each avatar of the Mata. 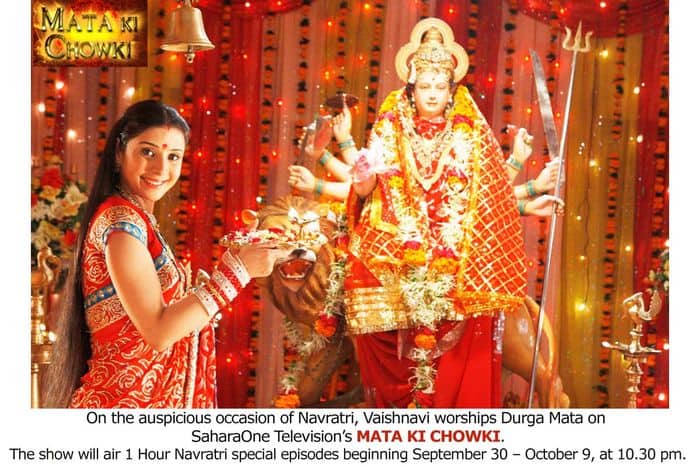 Since its inception, SaharaOne’s ‘MATA KI CHOWKI’, has embarked on a journey for the restitution of goodwill. The story revolves around Vaishnavi, an orphan girl who became an ardent devotee of Mata Vaishno Devi. She is actively involved in preaching about Mata, sings Jagrata, and motivates people to follow the preaching of Mata and rescues people from pain and misery, all of which are seen as miracles by the masses. Her faith in Mata sees her sail through every possible hurdle that life throws at her while at the same time her good deeds towards enlightening the masses raises her divine personality amongst them.

Taking this spirtual journey to its peak, starting from the very auspicious first day of Navratra, Mata ki Chowki will enlighten viewers about the nine avatars of Mata. All through the nine days of Navratra that concludes with Dusshera, lead character of Mata Ki Chowki, Muskan aka Vaishnavi will narrate the story of each avatar of Mata viz Shailputri, Brahmacharini, Chandraghanta, Kushmanda, Skanda Mata, Katyayani, Kalratri, Maha Gauri & Siddhidatri.

The nine-day period from the new moon day to the ninth day of Ashvina is considered to be the most auspicious time of the Hindu calendar and is the most celebrated time of the year as Durga Puja. The nine different forms of Mata are worshiped over the nine days. Vaishnavi will narrate the story of these various avatars of Mata, that zillions of hindus will be worshipping everyday.

In its firstever and unique way, Mata Ki Chowki will blend reel and real by taking viewers through the stories of nine orphan girls whom Vaishnavi dreams of in her sleep and later comes across them in reality in an orphanage. These little nine girls will represent the nine avatars of Durga. Their lives in the orphanage is threatened by the evil plan of a villain, who will be juxtaposed as the evil Mahisasur. Throughout the nine-day episodes, Vaishnavi along with the nine girls will struggle & fight to finally bring end to the evil designs of this villain. On Dussera, the tenth day episode will see Mahisasur completely being destroyed.

Says Nilanjana Purkayestha, Business Head, SaharaOne Television, “We are very happy to bring to our viewers special telecasts of ‘Mata Ki Chowki’ during Durga Puja. As a tribute & devotion to Maa Durga, the current episodes during Navratri will have an further half hour narration of each avatar of Mata for nine days to enlighten the viewers about the goddess they ardently worship during the auspicious Navratri season. Festivals in India epitomise the religious, cultural and social aspirations of the people, and are occasions to reaffirm one’s gratitude and allegiance to one’s family. It is our endeavour, in our own small way, to rekindle this faith in God and reaffirm our gratitude to our viewers.”

“Shail” means mountains or rock, “Putri” means daughter. Parvati, the daughter of the King of the Mountains Himavan, is called ‘Shailputri.” Her two hands display a trident and a lotus flower. Her mount is a bull! She is the first Devi of the Nine Durgas. In her previous birth, she was born as Sati the daughter of Prajapati Daksha. She was the wife of Shiva. Once her father had organized a big ‘yagna’. Everyone other than Shiva was invited. In spite of Shiva’swarnings Sati visited the yagna, where her father insulted Shiva. Not able to take the insults, Sati burnt her self. After that, she took birth as the daughter of Himalayas as Shailaputri (also known as Parvati or Hemavati). She married Shiva. When the Yogis worship this form of Devi, they concentrate on the ‘Muladhara Chakra’.

The second Durga Shakti is Brahamcharini . Here “Brahma” means meditation. That is, the Goddess is the meditator or a practitioner of penance. She is seen here holding a string of rosary beads in her right hand and a Kamandalu (an urn containing holy water) in her left hand. In her previous life, when she was reborn as the daughter of Himalaya, she performed severe penance to have Mahadeva as her husband. The sage God Narada advised her to take up meditation to win Shiva. For undergoing strict meditation she was known as Brahmacharini or Tapasyacharini. From that time her name Uma became familiar.

Goddess Durga’s third form is known as Chandraghanta. This name finds its explanation in the a half-circular moon on the temple of the Goddess that resembles a bell. She has three eyes and ten hands. The ten hands of the Goddess wield ten different weapons. She is seated on Lion and is worshipped on the third day of the Navratri celebration.

She is Golden color and her appearance always spreads a calm and eternal peace all round. Worship of the deity helps one eliminate the sorrow, hazards and dangers in ones life. She is unprecedented image of bravery. The frightful sound of her bell terrifies all the villains, demons and danavas.

The fourth appearance of the Goddess is in the form of Kushmanda. She gets the name as she created the universe with a smile. She shines brightly in all the ten directions like Sun. She has eight hands and is also known as “Ashtabhuja. The Goddess seven hands hold the holy urn (Kamandul), a bow, an arrow, a lotus, a pot containing wine, a disc and a club. The eighth hand holds a string of rosary beads that is believed to provide success and prudence. She seems brilliant riding on Lion.

She is worshiped on the fourth day of the Navratri. Worship of this form of the Devi exterminates sorrow and diseases and augments life, fame and strength.

Fifth form of Durga is “Skanda Mata.” Kumar Kartik’s other name is Skanda. As Goddess Durga is the mother of Kartik, she is referred to as “Skandamata.” Skanda Mata is a deity of fire. The Goddess is seen holding her son Skanda with the top right hand and lotus in her lower hand. The top left hand is positioned in a blessing gesture and the other hand holds a lotus. The goddess is fair and seated on a lotus. That is why the Goddess is also known as “Padmasana.” Katyayani

Katyaayani is the sixth form of Goddess Durga. Sage Katyaayan was the son of the great sage Kat. Katyayan had observed rigorous penance and worship of “Bhagavati Paramba with a desire to get paramba as his daughter. The wish was granted and she took birth as a daughter of Katyayan and therefore named as “Katyayani.” She has four hands. The top right hand is positioned in a gesture of providing courage and the other hand is positioned in a gesture of rendering a boon. The top left hand is holding a sword and the other holding a lotus. The Goddess is mounted on a lion and she is worshiped on the sixth day of the Durga puja. If one worships the deity with a pure soul he attains success in religion, wealth, passion and salvation. Disease, sorrow and fear are eliminated.

Seventh Durga is Kalratri. She is black like night. Durga hairs are unlocked. She has put on necklaces shining like lightening. She has three eyes which are round like universe. Her eyes are bright. Thousands of flames of fire come out while respiring from nose. She rides on Shava (dead body). There is sharp sword in her right hand. Her lower hand is in blessing mood. The burning torch (mashal) is in her left hand and her lower left hand is in fearless style, by which she makes her devotees fearless. Being auspicious she is called “Shubhamkari.”

The Eighth Durga is “Maha Gauri.” She is as white as a conch, moon and Jasmine. She is of eight years old. Her clothes and ornaments are white and clean. She has three eyes. She rides on bull and has four hands. The above left hand is in “Fearless – Mudra” and lower left hand holds “Trishul.” The above right hand has tambourine and lower right hand is in blessing style. She is calm and peaceful and exists in peaceful style. It is said that when the body of Gauri became dirty due to dust and earth while observing penance, Shiva makes it clean with the waters of Ganges. Then her body became bright like lightening. Therefore, she is known as “Maha Gauri”

Ninth Durga is Siddhidatri. There are eight Siddhis – Anima, Mahima, Garima, Laghima, Prapti, Prakamya, Iishitva & Vashitva. It is said in “Devipuran” that the Supreme God Shiv got all these Siddhies by worshipping Maha Shakti. With her gratitude the half body of Shiv has became of Goddess and therefore his name “Ardhanarishvar” has became famous. The Goddess drives on Lion. She has four hands and looks pleased. This form of Durga is worshiped by all Gods, Rishis-Munis, Siddhas, Yogis, Sadhakas and devotees for attaining the best religious asset.