In a close contest Mahanta defeated firebrand younger MLA Padma Hazarika by 37 votes in the organizational elections of AGP held at the party headquarters at Ambari in Guwahati. 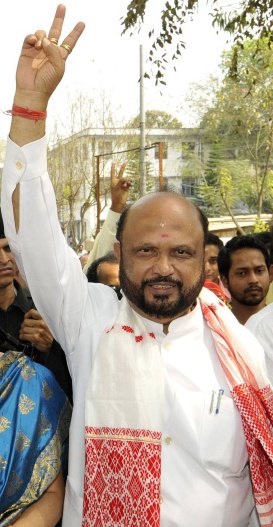 “We will looked for reforms the party postion and put it on track to revival before the next assembly election 2016,” Mahanta said after gaining the top post of his party.

The party which was in power for two times in Assam, now have only 10 MLA’s in the 126 member assembly.

390 out of 395 members of the party casted their votes in the election.

“We are happy about the party members want Mahanta takes command of the party,” an AGP leader said.

Apart from the president post, senior leader of the regional party Atul Bora won as the Executive President by 68 votes.

AGP hold the election to pick up its leadership for the first time since 1985.

The party had elected 28 members, as a president and a working president, five general secretaries and 21 executive members.

AGP was formed after the historic Assam Accord of 1985.