On 7th January 2011, a poor Bangladeshi teenage girl named Felani was brutally murdered by the elite Border Security Force (BSF) of the powerful neighbor India in the border region. Hundreds of such deaths have occurred over the last decade partly because of Bangladesh’s inability to protest and to bring the issue to the notice of the international world and partly because of India’s huge influence on world politics.

What makes the Felani tragedy different is the degree of BSF brutality and the indifference of the Bangladeshi regime that represents her.

The image of Felani’s death, her tangled body hanging on the fence India has made around Bangladesh melts even the hardest of the hearts. Felani and her father Mr Nurul Islam worked as maidservant and day labourer respectively in the other side of the border. They were coming back to Bangladesh from India by crossing the border barbed wires, as the next day was her wedding. Mr Nurul Islam successfully crossed the fence.

However, full of romance in the heart and wearing gorgeous dress, Felani was perhaps a little absent-minded, as her mind was more occupied with the most important event in her life that was supposed to happen the next day. She could not cross the fence and got tangled on the barbed wires. 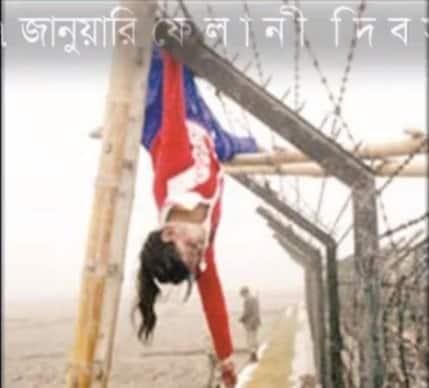 Sensing the impending dangers of being killed by the ruthless BSF, she because fearful for her life and started screaming. Her father could not dare go near her, as such a move would lead to his definite death by the BSF. The thirsty Felani kept screaming for her life and was saying ‘water’, ‘water’…. The Indian BSF heard her cries and shot her dead without wasting time. She was hanging on the fence for about five hours until her killers took her away. When she was handed to the Bangladeshi border guards, the jewelries she was wearing were not there.

The shock and despair of the Bangladeshi people forced the pro-Indian Bangladeshi regime to make some noise over the death of Felani, as a result of which India in its own ritualistic way made some false promises of not repeating such brutalities. The Bangladeshi government has carried on its business as usual, while, since Fenali’s death, Indian BSF have murdered dozens of more poor Bangladeshis in the border region.

I have sifted through many Bangladeshi newspapers (both Bangla and English) to see if Felani is remembered at all on the day of her first death anniversary. I have been disappointed. Most of the newspapers did not bother to write anything on Felani. Nor did they cover the isolated events that took place to commemorate her violent death. The silence of Bangladesh government on Felani’s death anniversary is not surprising to the Bangladeshi people who have been observing its disgraceful subservience to India.

Felani did not come from a rich, privileged family. Nor did she belong to any of the political dynasties of Bangladesh. She was poor and did not have the luxury of receiving any formal education. Her killers belong to a very powerful country which sways the politics of her country. Perhaps, these are some of the reasons why she is not remembered adequately even in her own country. Or, perhaps, through her death, Felani has pointed to the blatant hypocrisies of a big section of the Bangladeshi intelligentsia who are reluctant to write or say anything that may go against the wishes of India.

Many newspapers in Bangladesh are run by left-leaning editors who are supposed to have concern for the have-nots and the downtrodden. However, their loyalty to India overwhelms their leftist political philosophy. Many in the Bangladeshi media exercise their freedom to condemn the misrule of the pro-Indian Awami League. But when it comes to India’s hegemonic attitude and its exploitation driven foreign policy to Bangladesh, we see a mysterious silence.

Surprisingly, the Bangladeshi intellectuals who make regular statements to establish patriotic credentials show complete cowardice when it comes to exposing India’s political and economic exploitation of their country. While the Indian BSF personnel are killing many of their fellow countrymen, these intellectuals may be demonstrating extreme desperation to be on the good books of Indian High Commission in Dhaka.