The Burmese exiles living in India and their sympathizers had recently came to the street of India’s national capital to lodge a stronger protest against the government for supplying arms and ammunitions to the semi-military Burmese government at Naypyidaw. Expressing resentment at New Delhi’s continued military relationship with Naypyidaw, hundreds of pro-democracy activists and various Indian civil society groups demonstrated in New Delhi on the 22nd of July, 2011 arguing that ‘supplying arms to the most brutal military dictatorship may have grave consequences to millions of innocent lives’. It may be mentioned that the Indian government had recently supplied 52 military trucks load of arms and ammunition to the Burmese government. 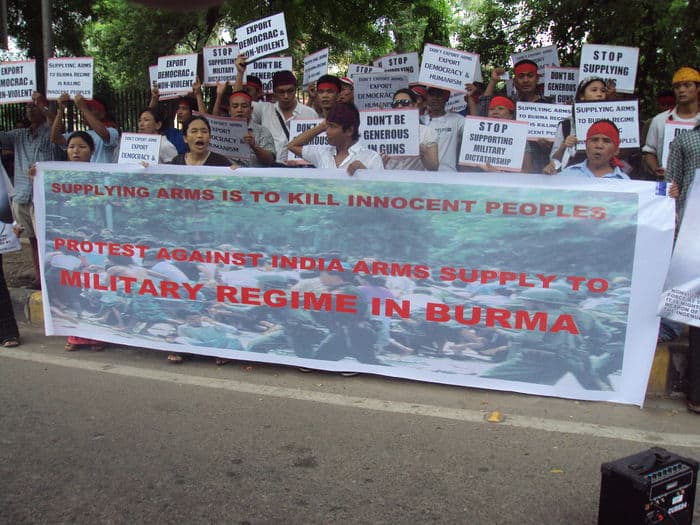 India maintained its strategic and military relationship with the Burmese regime even after receiving brickbats from the international community. “It is hurting and awful that the Government of India has breached its democratic principles by supplying arms and ammunitions to the Burmese military rulers, which are identified as the world’s most notorious military regime. The consequence will be the victimization of innocent Burmese citizens who have been yearning for justice, peace and democracy for many decades,” said M Kim, a young Burmese exile living in India. “Systematic human rights abuses and criminal hostilities against the ethnic groups, political activists, journalists and civilians have been committed without a halt by Burma’s Army even after the installation of a so-called civilian type government. 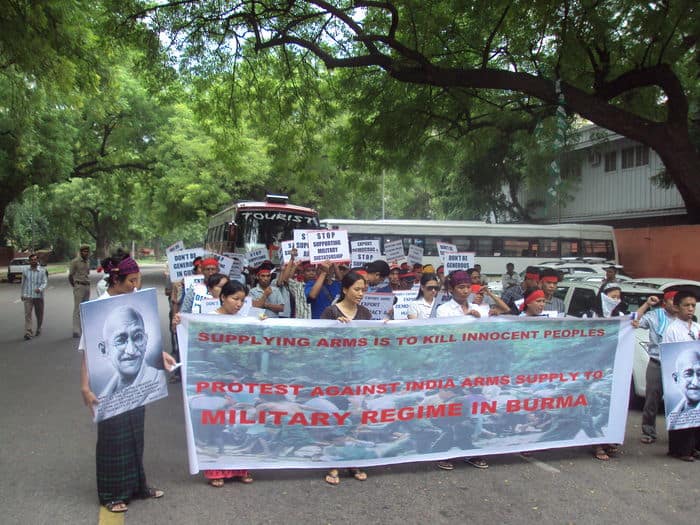 It is a fact that over 2,200 political prisoners in Burma are still detained in jails,” he added. The demonstrators also sent a memorandum to Indian Prime Minister Dr. Manmohan Singh urging him to renew New Delhi’s support the Burmese people’s movement for restoration of peace and democracy in Burma. Till the early nineties, Indian government supported the democratic movement led by Daw Aung San Suu Kyi. But later it changed the course and started engaging the then military regime named State Peace and Development Council for various bi-lateral relationships. “We believe that India is a nation founded on sound democratic principles and time and again India has proven to uphold the principles of constitutionally elected governments.

Further as a nation committed to playing an important, if not pivotal role in maintaining peace in the region, it is unbecoming of a responsible nation to supply arms to countries known for abusing military power,” states the memorandum, which was signed by nearly hundred Indian civil society groups and individuals with many Burmese organizations. “While other big neighbours (of Burma) are silently urging for negotiation between the authorities and ethnic groups, New Delhi has continued its arm supply to the infamous regime,” said Dr Tint Swe, the chairman of Burma Centre Delhi, a pro-democracy forum.

Speaking to the author from New Delhi, Dr Swe asserted that “democracy and human rights activists in Burma have been imprisoned, intimidated, tortured and many of them are put to death and it is observed by none other than the United Nations and the international community that the advocators for democracy, justice, peace and human rights in Burma have been regularly castigated.” So we are apprehensive that those arms will only be used against the pro-democracy activities and ethnic minorities like Kachin, Shan and Karen in eastern Burma, added Dr Swe.

In a separate memorandum to the Indian Premier, the Burmese pro-democracy groups urged New Delhi ‘to immediately halt the supply of military aids to Burma’s dictatorship’ and ‘to review India’s foreign policy on Burma by focusing on long-term interests, development and stability, prosperity and peace in the region’. ‘Systematic human rights abuses and criminal hostilities against ethnic groups, political activists, journalists and civilians have been committed by Burmese Army even after the installation of a so-called civilian government at Naypyidaw,’ the memorandum pointed out.