An untoward incident of physically assaulting a lady television reporter by the police personnel in northeast India recently, brought back the old debate of having a special law for protection of journalists on duty. The incident that took place at Latashil police station in the heart of Guwahati city on 31 January 2015 resulted in huge protest rallies by the media fraternity demanding the authority to book the blamed police officers under the laws.

For three days, the Guwahati based journalists demonstrated their angers against the police atrocities in various occasions. The media persons expressed apprehension that the arrangement of police commissionerate, which was introduced in Guwahati on 1 January 2015, would increase the police access on various public space. The debate gained momentum as the lady reporter and her camera person faced physical attacks from the policemen at Latashil police station in the heart of Guwahati city. The young reporter, who works for the Guwahati based satellite news channel DY365, went to the concerned police station with due permission with a aim to report about the pathetic condition of the quarter and barracks inside the Thana campus. Everything was fine till the reporter found a clue that there was a quarter inside the PS campus, which was allegedly rented out to outsiders by a police officer. The reporter talked to a woman, who was staying inside the said quarter, though she claimed to be a close relative of a police sub-inspector. The concerned SI (Samsuddin Ahmed) was recently transferred from Latashil PS, but he did not vacate the quarter.

As the lady scribe talked to the woman in the quarter, the police men on duty informed the officer-in-charge of Latashil PS, Chidananda Bora about the matter. Bora immediately asked the media persons to withdraw the visual of the reporting, which the lady reporter denied. That ended in physical assaults by the police men on the camera person Tapan Das and even the lady reporter.

According to the FIR, the lady scribe lodged in Latashil PS, she was targeted by both OC Bora and SI Ahmed (who was present there) and even touched her private parts. The police men snatched the camera, where the footage relating to news story was recorded, and asked the media persons to delete the same. When they did not comply, the situation turned ugly. Facing the unwanted situation, the lady reporter quickly called her other colleagues, which was responded by a group of reporters belonged to her news channel. More journalists from other media outlets in the city also joined them turning it into a demonstration inside the Thana campus. The incident took place at noon, but the protest demonstration continued till midnight.

As a next step, a group of journalists with civil society group representatives assembled in front of Assam Secretariat on 2 February and demanded stringent punishment to the police personnel who assaulted the television scribes on duty. The police were quick to detain and took them away. But more protesters joined them and the drama continued for the whole day. Meanwhile, the Electronic Media Forum Assam (EMFA) and Journalists’ Forum Assam (JFA) condemned the police atrocities on the lady scribe and also the detention of agitating journalists from the front of State Secretariat. Both the organizations urged the State chief minister Tarun Gogoi (also in charge of State home portfolio) and Assam police director general Khagen Sarma to take appropriate actions against the guilty police officers immediately.

The government in Dispur verbally communicated the agitating journalists and informed that both the blamed police officers were closed to reserve (meaning removed from duty) and the chief minister ordered a high level probe into the matter. But initially there was no official statement regarding the government response.

Guwahati police commissioner Jyotirmoy Chakrabarty also reiterated that the responsible police officers would be punished if proven guilty. He also informed that a case was registered in Latashil PS following the FIR of the lady reporter. However the police also received two more FIRs lodged in the same police station by SI Ahmed and the woman, who was interviewed by the lady scribe in the quarter on the fateful day. Assam Police Association, while trying to justify police actions against the lady scribe, argued that she ‘trespassed into the privacy of a woman’. In a statement, the police association claimed that the lady scribe took visual and put abrasive questions to the woman when she was breastfeeding her baby. Moreover, it asserted that the police would not succumb to the pressure of journalists and few leaders of political parties and organizations. Ridiculing the allegations against the lady scribe and accompanying camera person, the EMFA organized a human-chain in front of Guwahati Press Club on 3 February. Journalists across Assam supported the move and demonstrated against the police atrocities on media persons with black-folding their mouths. The press fraternity of Arunachal Pradesh, Manipur, Meghalaya, Nagaland and Tripura also supported the agitating journalists of Assam. 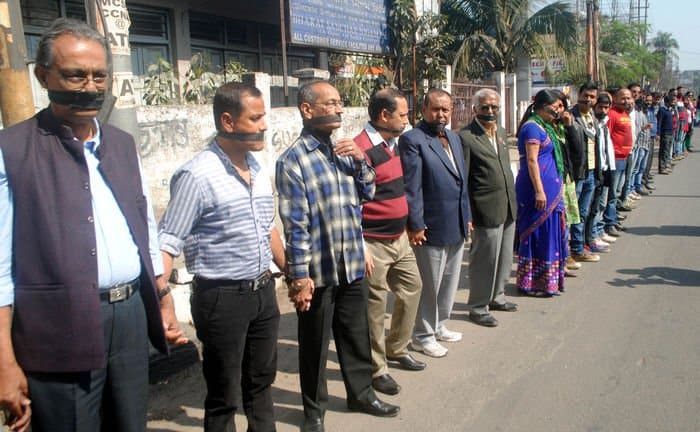 Terming the incident as a matter of serious concern for the freedom of press in a democratic country, the press fraternity of Arunachal Pradesh also condemned the police atrocities on scribes. In a statement on behalf of the members of Arunachal Press Club, Arunachal Pradesh Union of Working Journalists and Arunachal Electronic Media Association, the media fraternity extended moral supports to the agitating Guwahati journalists for the greater interest of media fraternity of the region. Supports were extended by the Manipur based journalists also, as the All Manipur Working Journalists Union (AMWJU) came out with a statement condemning the atrocious police action on a lady journalist and her cameraperson when they were gathering news of the appalling state of a police quarters in Guwahati.

“AMWJU considers the action as an attack on the freedom of press and demands prompt redressal from concerned authorities of the Assam police and Assam government by delivering befitting punishment to the guilty personnel,” said the statement. North East Network (NEN), a woman’s organization based in Guwahati condemned the physical assault of the woman journalist by male police personnel saying ‘such is not an isolated act, but it threatens the personal & professional integrity of a woman professional.”

The government must ensure that the perpetrators would be punished as per relevant laws by appropriate authorities, said a NEN statement adding that the women journalists have a right to practice their works in secure conditions and fully exercise their rights to freedom of expression without any threat or fear of discrimination and violence. Even the Union sports minister Sarbananda Sonowal, who was in the city, also met the agitating media persons on the street and termed the situation as ‘lawlessness’ under the Tarun Gogoi led Assam government. “The attack on media shows that people in the State are not safe. The government has failed to ensure safety and security to not only the citizens but also to journalists during their duty hours,” said Sonowal, who a BJP Parliamentarian from Assam.

Finally the State government, in an official communique, declared that the chief minister had ordered a probe into the incident by additional State chief secretary Rajiv Bora and ordered him to submit the report within one month. Assam Human Rights Commission also registered a case on 2 February and asked the authority to institute a probe into the matter of harassing media persons inside a police station. The EMFA, which lodged a complaint with the National Commission for Women (NCW) demanding justice to the victim journalists, also raised voices for a special protection law for journalists on duty. In a memorandum to the member secretary of NCW, the television journalists’ forum requested for appropriate actions against the guilty police officers (both are male) as they mishandled a lady journalist. In another memorandum to the Union law & justice minister Sadananda Gowda the media forum claimed that the situation is same across the country and hence a special law for working journalists becomes the need of the hour.

“Need not to mention that the journalists, who remain visible in the society for their working space, often face vulnerability all along their working hours. The situation thus curtails the freedom of expression, the rights guaranteed by the Indian Constitution to every citizen of the country,” said the memorandum adding that the present laws in practice in India treat a journalist on a dangerous assignment without any differentiation to a common man. “This may discourage the journalists to take hazardous engagements due to the fear of facing unwanted circumstances, which will ultimately affect the functioning of journalists and many of them may opt for soft stories resulting in the slow degradation of journalism in our country,” the EMFA memorandum stated.