The pro-democracy Burmese exiles in India held a demonstration against the flawed election proposed by the military rulers of Burma and a symbolic people’s election in New Delhi on May 27.

Hundreds of Burmese gathered at Jantar Mantar in Indian capital and organized a rally. Later a memorandum was also sent to the Indian Union government by the demonstrators with various appeals. The programme was a part of Global Day of Action under the Global Campaign Against Burma’s 2010 Military Election. 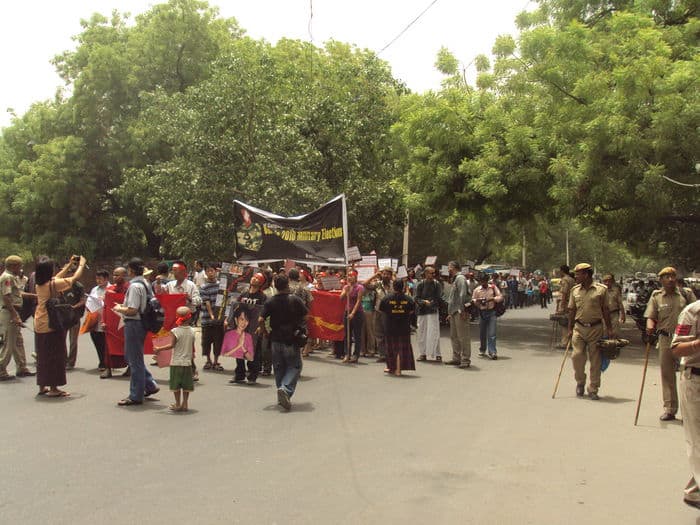 The campaign, initiated by Ten Alliances of Burma’s democracy and ethnic rights movement representing the broad-based and multi-ethnic cooperation of political and civil society organizations from inside and outside Burma, has been supported by over 150 organizations around the world. In fact, starting from May 22 till date, over 3,600 members of the Burmese community living in exile had signed postcards and voted that way in favour of the pro-democracy icon Daw Aung San Suu Kyi and a Democratic Federal Union of Burma. The signed postcards even call on the Indian Prime Minister Dr. Manmohan Singh to denounce the upcoming 2010 elections in Burma and reject the results unless the Burmese regime changes the repressive actions. 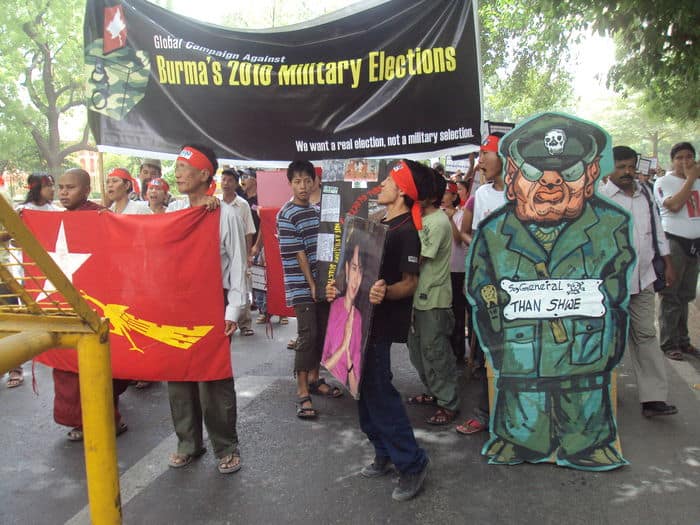 “It is already clear that the military’s elections this year will not be a step forward that Burma needs. The National League for Democracy and many ethnic groups have already decided that they cannot participate in such sham elections. Indian government should stand with them and the people of Burma in demanding genuine democratic elections, rather than supporting the military’s sham elections,” said Dr. Tint Swe, MP elect in 1990 elections from the Suu Kyi’s party NLD (now deregistered).

The NLD and other democratic parties of Burma established a landslide victory in its general elections on May 27, 1990. But the junta did not recognize the outcome of the polls and hence did not hand over power. Rather, the group of generals imprisoned many opposition political leaders and many elected representatives left the country to take refuge in foreign nations. 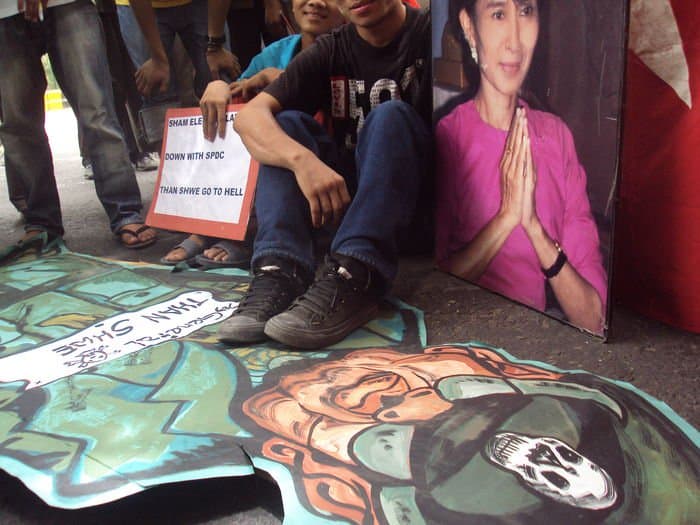 The military rulers of Burma has once again declared about a general election sometime later this year. But the electoral laws released prior to the exercise indicted that the junta was still uncomfortable with Ms Suu Kyi. Over two thousand political activists are still behind bars in Burma and they will never be allowed to take part in the election. On May 27, Burmese around the world had demonstrated their resentment against the imposed military election in Burma. The exile Burmese groups will hold public rallies and protest meetings in front of the Burmese Embassy, UN Building and other public places on the day to draw the attention of the international community.

“We, the exile Burmese in India or anywhere in the globe are actually calling on international governments to denounce the proposed Burma election and reject the results under this situation. The Chinese and Indian governments with the member-countries under the Association of Southeast Asian Nations are being urged primarily as those nations have maximum influences on the junta,” informed Pu Kim, a Burmese political activist based in New Delhi. 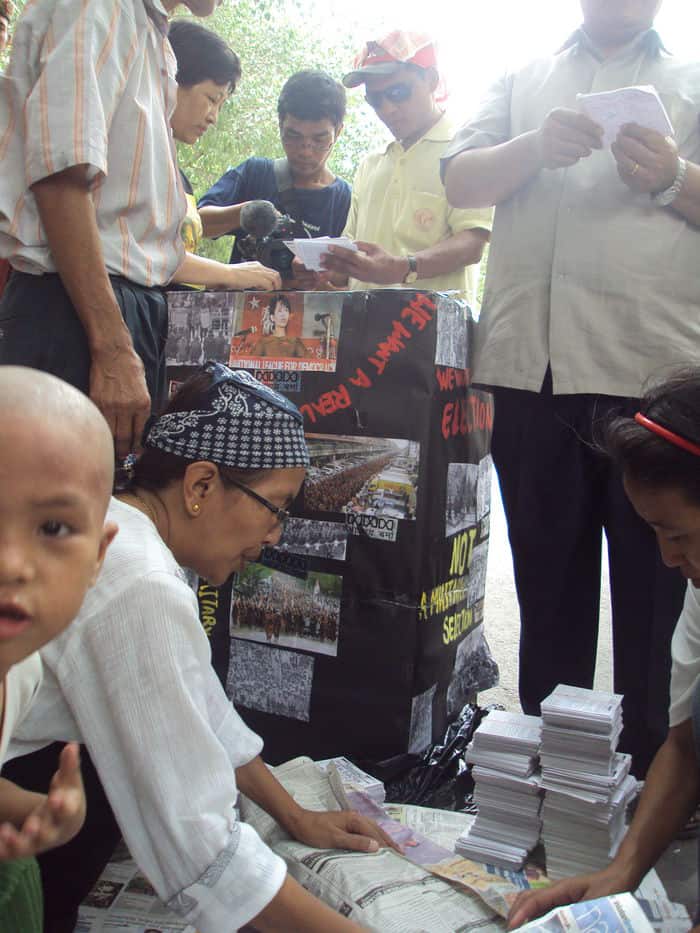 It is mentionable that the Global Day of Action for Burma was an initiative by the Burma Campaign UK, with the support from US Campaign for Burma, Amnesty International, Avaaz.org. It also included Buddhist monks from different parts of the globe during the 2007 anti-junta protest in Burma which was simultaneously organized in over 100 cities of 30 countries. 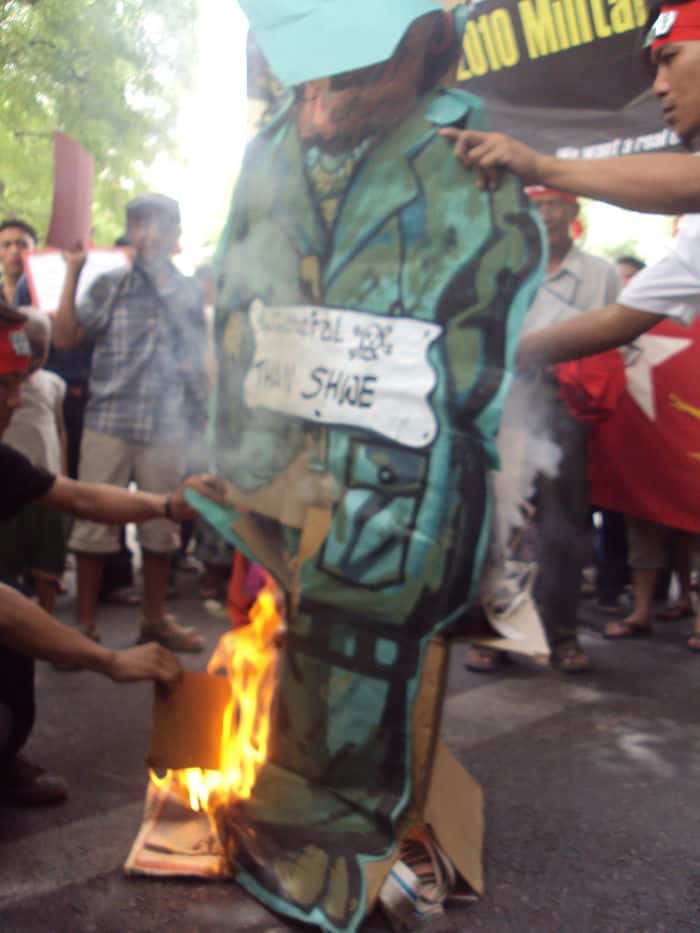 The peaceful protests were aimed to make public awareness regarding the plight of Burmese people including the monks, and finally international community to raise voices against the military junta. “After almost five decades of military rule, the people of Burma want real, democratic, people’s elections. It is now clear, however, that the military regime’s first elections in twenty years will be nothing but a thinly veiled attempt to legitimize military rule,” stated in a release from Burma Partnership, the campaign secretariat of Global Campaign Against Burma’s 2010 Military Election.