The military government of Bhutan has blocked the Bhutan Times from being viewed from within the country because officials say the site has been covering ‘controversial issues’.

The Bhutan Times has been seen as a popular site for forum discussions where people can register and express their opinion on important national issues.

The editorial policy of news organisation has been to offer balanced and in depth news, covering both sides of the story. 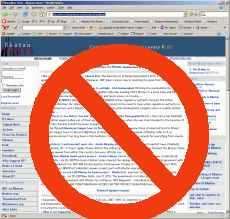 Some forum discussions were critical of the minister Sangey Nidup, the maternal uncle of the present Crown King.

The regime’s decision to block the site is in direct violation of Bhutanese individuals’ right to information.

Article 7 of the Bhutanese constitution contains a provision setting out fundamental rights that include the right to information and expression. Sub Article (2) of Article 7 states, ‘A Bhutanese citizen shall have the right to freedom of thought, conscience and religion. No person shall be compelled to belong to another faith by means of coercion or inducement’.

Similarly, Sub Article (4) states, ‘There shall be freedom of press, radio and television and other forms dissemination of information, including electronic,’ and the (5) says, ‘A Bhutanese citizen shall have the right to information’.

Despite the constitution guaranteeing the Bhutanese people the right to information, the government continues to block that right.

As soon the issue was covered by the Association of Press Freedom Activists (APFA) – Bhutan, a website run by journalists in exile, the International Federation of Journalists (IFJ) expressed deep concern over the Bhutanese regime’s initiative to block the site and called on the Bhutanese government to reverse the decision.

In a statement on the IFJ site, the organisation’s director for the Asia-Pacific region, Jacqueline Park, said the action was both alarming and hypocritical.

“We strongly urge the Bhutanese government to overturn this decision, which can only be described as blatant censorship, and allow the Bhutanese people full access to the bhutantimes.com.

“We strongly urge the Bhutanese government to overturn this decision, which can only be described as blatant censorship, and allow the Bhutanese people full access to the bhutantimes.com.

“It is a hypocritical move by the government to block local access to this website, particularly after taking so many positive steps towards a freer media, such as allowing the introduction of media privatisation last year,” Park said.

It seems that the regime is turning a deaf ear to the demand raised by such international press bodies working for the promotion of peoples’ right to information at a global level.

People’s democracy cannot be predicted where media freedom doesn’t exist. If the government of Bhutan is really serious about moving towards ‘democratization,’ then it shouldn’t compromise with guaranteeing the right to information.

The internet service has connected people globally. It is the only ’round-table’ where bhutanese opinions are highlighted and exchanged.

The blockage of the site, which was acting as one of the mediums to promote the right to information, leaves a question mark as to the seriousness of Bhutan’s plans for democracy.