Karbi Cultural Society has organized a full force to clean up the unfinished work at ‘Karbi Peoples Hall’ in Taralangso, where the 41st Karbi Youth Festival will begin in just 12 hours. More than five thousand artists and ten thousand technical persons are working around the clock to host the biggest ethnic festival in northeast India.

More than five extra large open air stages with natural colonnades in the hill terraces have been equipped with light and sound systems to showcase ethnic cultural events, rock music, drama and ballets in extreme natural backgrounds. Various water bodies have been refurbished and the waterfronts have been provided with bamboo bridges and bamboo benches. A large area of jagged land has been converted into a souk and transversely a small lake in a huge plot. Government departments have erected gigantic pavilions to demonstrate government achievements. 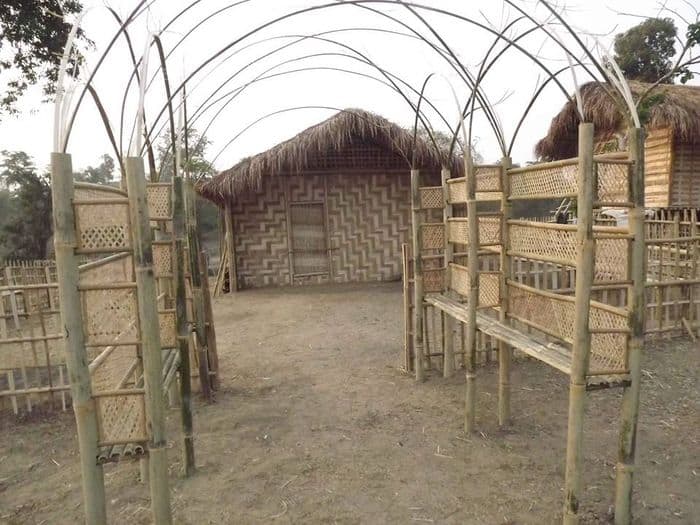 This time the newly built up ecological park adjacent to Karbi Peoples Hall will be an additional magnet for visitors. The place is in fact a large parkland centring on an artificial lake with numerous species of endemic plants particularly bamboo varieties, a bamboo fabrication unit of the Forest department has been built near the biological park. Performers of various tribal communities will be accommodated in the artist village where dwellings have been erected with bamboo and thatches in racial designs of tribal tang and flavour with exception of electricity and toilets.

The whole 200 hectare furrowed lush green place is now teeming with activity, and hundreds of scholars from various parts of India and abroad have arrived to study the culture of the unmixed aboriginal tribes of this region who have preserved their legacy of almost archaic livelihood and food pattern until today. Effort has been made to give you an idea about the tribal dwellings, food, their medicine, clothing, housing, agriculture, livestock rearing and song, dance even their last rights and their legends in the 6 day unconventional extravaganza of uncommon moral fibre.

Seminars and colloquiums on relevant tropics have been arranged alongside the cultural and food fiesta. To mark the beginning of the mega cultural competitions and the youth events, Karbi customary King, His Highness Harsing Ronghang will lead an edifying procession of artists, cream of the society and youths of various tribes in their time-honoured costumes backed by rich ancestral music of various tribes of the region on Monday morning. The exclusivity of the Karbi customary King is that, he is not a hereditary ruler nor comes from a royal linage but for thousands of years of unrecorded olden times, the Karbi King has been nominated by people of the community in accordance with the established Karbi customary commandments.