Just before the result of the Iranian Presidential election was known, certain people (like President Obama for example) gave the impression that the vote was being carried out in a fair and honest way. Even the mainstream media seemed enthusiastic about the process.

Of course, this may have had something to do with the fact that the mainstream media were confidently reporting that incumbent President Mahmoud Ahmadinejad was on the brink of defeat. However, once the result was known (a landslide victory for Ahmadinejad), and did not go the way some in the west hoped, the election was immediately branded a sham.

What made people like Obama so confident that a shock result was about to unfold? 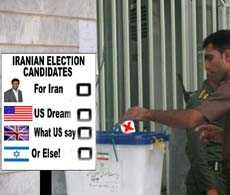 The US and Britain have been accused by Iran of trying to influence the voters, in order to bring about a change of regime (one that would be more subservient to the West, in particular the US and Israel). But are they guilty as charged?

This tactic has been used many times recently by the US. We saw it in Georgia and in many other former Soviet States, where the public were seduced by visions of the “American Dream,” something unfortunately the American people have had taken from them many years ago!

Leading figures and certain politicians are targeted to help these “Revolutions” become successful, and later rewarded with riches beyond their wildest dreams, together with positions of power in the new puppet government.

No one can say that the present system in Iran is perfect, but the people of Iran need to understand that these “Revolutions” do not bring the freedom they seek, only different masters. Some might say anything is better than what they have, but there are a few million Iraqis that might offer some advice in that area.

Just like Iraq, the west is not interested in “liberating” the Iranian people, they want its oil! The citizens of Iran have had to suffer the “threat” of attack from Israel and the US for many years, which was partly an attempt to frighten the people into choosing a different course. Now that the hoped-for “Revolution” has failed, the possibility of a military attack has become much more real.

There are many countries in the world that can be accused of treating its citizens in a bad way, but it is not for the leaders of other countries to take direct action in changing that. We can offer advice and suggestions, but at the end of the day, it is up to the people to make the final decision. Throughout history (even in the US), it is the people that decide when they have had enough and choose to fight for their rights (without any outside interference). Sometimes that can take a long time to happen, so we have to be patient.

Whilst I admire Iran’s courage in refusing to be bullied by the US and Israel (something more should try), clearly there is a need to address some of the problems that they are facing from the public.

There is no reason why Iran should surrender its Islamic identity, but a little more flexibility wouldn’t do any harm. If reforms are brought in gradually and the leaders show they are willing to at least consider a few changes, this would gain a lot of public respect.

Should this happen, the west must be prepared to offer its support (no more threats) and let things take their natural course, but this is very unlikely. If Iran had no military force and no oil, countries like the US and Israel wouldn’t care less who was running the show.

As a final note of interest, have you noticed how some of the protesters in Iran were displaying their messages of “anger” at the election in English? (Click here for an example from the Los Angeles Times). These have been seen many times before in other “revolutions” and are obviously for the benefit of the western audience, not the leaders of their own country. Have you ever seen Americans creating placards in Chinese or French when protesting against their own government?