Is it possible that The Guardian has managed to obtain “inside information” about Peter Moore’s kidnapping from his captors, or are they trying to compete with The Sun for publishing sensational (but unconfirmed) stories?

According to reports by The Guardian, Peter Moore’s kidnapping was masterminded by Iran; although the Government has said it has no evidence of a link.

It is odd that the “date” is verbally mentioned in the videos showing the alleged captors, as this normally is shown in other ways. The videos were also recorded some time ago, yet this is the first time we have been told of their existence. Why is that?

Are the people being interviewed falsely claiming to be the kidnappers and lying about the Iran connection, and for what purpose?

The British and American governments claim to have no knowledge of the information presented by The Guardian, which seems to suggest the following: 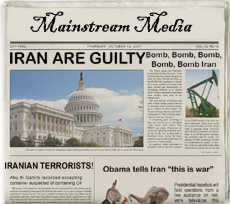