Citing that scale and scope of the human tragedy in Syria is staggering, the United States of America today underscored that a transition to new leadership can resolve the crisis of the Middle East country.

In his remarks in New Jersey on “America and a Changing Middle East,” Deputy Secretary William J. Burns says the simple truth is that there can be no stability in Syria, no resolution of the crisis, without a transition to new leadership.

He explains that the longer Asad clings to power, the greater the odds of state implosion, fragmentation, and regional spillover.

President Obama and Secretary Kerry have made clear that US strong preference remains a negotiated transition, he added.

In addition, Mr. Burns also points out that the Geneva framework of last summer offers a reasonable starting point, but Asad refuses to engage.

He cites that Russia has been also resistant.

However, with the recent visit of Secretary Kerry in Moscow this week, Mr. Burns hopes says the visit is an opportunity to test whether cooperation is possible.

US supporting the Syrian opposition

With Assad showing no sign to step down, the US is working intensively with a range of partners to strengthen the Syrian opposition and help shift the balance on the ground, which is essential to any chance of shifting Asad’s calculus.

Last month, US has doubled non-lethal assistance to the opposition, and the Obama Administration is actively considering other options.

According to Mr. Burns, there is a mounting urgency to this effort, as both the human and strategic costs grow.

Mr. Burns underscores that US has to work even harder with its allies and the opposition to accelerate Asad’s exit, while there’s still a Syria left to save, and to prepare for what will inevitably be a very difficult day after – more likely, very difficult years after.

He says whatever decisions US makes on further steps in Syria, it is crucial to mobilize as much regional and international support and also leveraging actions to help produce a stronger and more inclusive opposition coalition; and a stronger and more coordinated set of outside backers.

“That kind of “compact” has been the aim of Secretary Kerry’s very energetic diplomatic efforts over recent weeks.” – Mr Burns

Scope of human tragedy is staggering

Reports emerged that the scale and scope of the human tragedy in Syria today is staggering, and it is inexorably becoming a regional tragedy.

More than 70,000 Syrians have reportedly died.

According to the United Nations, one out of three Syrians will be forced from their homes by the end of 2013. 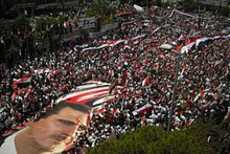 Jordan is overwhelmed by the burden of 500,000 Syrian refugees which is a number which could reach a million by the end of the year.

Mr. Burns also notes that the crisis in Syria has spilled over to seriously inflame politics in Iraq and Lebanon.

In addition, state structures in Syria are crumbling, extremists are expanding their influence among the opposition, and the dangers of long-term sectarian conflict and fragmentation are growing rapidly.

Apparent use of chemical weapons by the Syrian regime is deeply troubling, Mr. Burns said.

The US continues to press for a comprehensive UN investigation to fully establish the facts, as it considers options for responding.

Syrian crisis getting worse every day?

With President Assad’s showing no sign to stepping down and with the incessant conflict continues to destabilize the country, the world now is witnessing a rapid deterioration of an already devastating situation in Syria, where at least 70,000 Syrians have been killed and millions displaced.

The Syrian people continue to face deplorable attacks and massacres by regime forces, including the use of heavy weapons, aircraft, and ballistic missiles.

US considers these actions as proof of the Assad regime’s complete disregard for the lives of Syria’s citizens, including its children.

March was reportedly the deadliest month of the conflict with over 6,000 Syrians killed and with three to 4 million people are now internally displaced.

The exponential surge in refugees is among the clearest signs of this dire situation in Syria.

More than 1.2 million people are refugees and is predicted these numbers could double or even triple by the end of this year, nearly one third of Syria’s population.

Today, over 400,000 Syrians have fled in the last seven weeks alone and sought refuge in the neighboring countries.

Lebanon, Jordan, Turkey, and UN humanitarian agencies are approaching a saturation point with the surge of refugees.

The US is deeply grateful to the Government of Kuwait for fulfilling its generous contribution of $300 million to UN agencies and other international organizations.

US aid to Syria

In November 2012, the United States of America provided $30 million in additional humanitarian assistance to respond to the needs of Syrian people affected by the turmoil.

In Syria, the additional funding will allow for provision of food aid to families in need.

In neighboring countries, the additional assistance from the United States will provide food supplies, hot meals, and food vouchers for families who have fled the violence in Syria.

In addition, the additional assistance will be provided through the World Food Program (WFP), which is providing food aid to 1.5 million people in Syria and the refugees who have fled to neighboring countries.

The United States is the largest donor of food aid for those affected by the conflict in Syria through WFP.

In August 2012, with the violence engulfing Syria, the United States of America has announced an additional $12 million in humanitarian assistance, bringing the total amount of U.S. emergency aid to more than $76 million.

The U.S. government continues to place on ending the escalating violence which has uprooted hundreds of thousands of Syrians.

The humanitarian needs continue to grow whre the number of Syrians displaced to neighboring countries now exceeds 130,000, with nearly 1.5 million in need inside Syria, including UN-estimated one million internally displaced persons.

The Syrian violence has led a crisis on a humanitarian scale that is of the highest priority within the U.S. government, and for which the US pledges to continue to provide support.

In April 2012, with the deteriorating situation in Syria due to turmoil, the United States of America has bolstered efforts to provide humanitarian assistance to people affected by the conflict in the country.

The UN estimates that there are over 2 million Syrians inside Syria in urgent need of humanitarian assistance. Of that number, it’s an estimated 300,000 internally displaced.

United States has dedicated some $33 million to support the important work to assist and protect those in need in Syria and neighboring countries, and much more is on the way.

The violence in Syria, which began in March 2011 as a protest movement similar to those witnessed across the Middle East and North Africa, has claimed over 70, 000 lives, mostly civilians, and displaced tens of thousands.