On September 6, the Syrian Revolutionary Council reported at least 40 people were killed in a new massacre in the City of Nabek (district of Fattah). Dozens of bodies were found murdered in the basement of a building where they were apparently hiding for safety, including primarily women, elders and children. The oldest individual found was 75 year old Mohammad Qasim, and the youngest was 3 year old Siderh Qasim, presumably a grandchild or great-grandchild of the older man. After killing these innocent citizens of Nabek, it seems the Regime was just getting started.

Following claims on Thursday that regime forces used chemical agents against civilians in Nabek in Damascus province, the Qalamoun Media Center reported that medics in the town were attempting to get samples from the suspected chemical victims out for analysis. The Media Center says the samples consist of blood, urine, hair, and clothing from those affected, plus soil samples from the affected area. The samples are fully documented.

Dozens of martyrs and wounded were reported due to fierce artillery shelling in Naseem neighborhood which is full of displaced people and fires were seen erupting in many cars.

The Britain-based Syrian Observatory for Human Rights reported that the air raids hit the northeastern city of Raqqa in the early afternoon. Four women were among the dead and dozens of people were wounded, the Observatory said. The Free Syrian Army (FSA) captured Raqqa, the capital of the province of the same name, in March. It is the only major urban center to fall entirely under opposition control since the Syrian conflict began in March 2011.

According to Arab News, the FSA also announced on Saturday that two of its commanders were killed by the Al-Qaeda linked State of Iran and Syria (ISIS). The two commanders, Mohammad Al-Qadi and Ahmad Jahar, were abducted while leading an aid convoy from Turkey to northern Syria. They were reportedly last seen at an ISIS camp in the town of Azaz, but a day later their bodies were found by residents in the outskirts of Azaz. Some residents said they were baffled by the “secret execution” of the two men. One resident said the Al-Qaeda group usually puts individuals on trial and then executes them publicly. “Secret executions are not part of Al-Qaeda’s style,” one resident said.

Louay Safi, the official spokesman for the Syrian Coalition, said Iranian and Russian policies “seek to create a criminal and vengeful trend within Syrian society to keep the instability in Syrians.” Safi also stressed that Russia and Iran’s “silence towards the massacres committed by the Assad regime against women and children in conjunction with the issuing of many statements on the rumored abduction of the nuns” shows that the interests of the Syrian people are not high on their list of concerns, but merely “words designed for political consumption.” Safi went on to say, “Iran is still working on prolonging the conflict in Syria as a means to achieve their goals and political interests.”

Safi added that the regime’s talk about achieving a political solution to Syria’s war is only “an attempt to cover up its brutal massacres against the Syrian people.” A Syrian Coalition statement urged countries of the “free world” to act to protect civilians in Syria and “to intervene immediately to maintain international peace and security in accordance with the United Nations Charter.” As long as the International Community sits by and watches the horror in Syria, while saying “No more, enough is enough!” Assad will continue to kill!

In order to document the atrocities of the Assad Regime, the Media Office of the Syrian Coalition prepared a field report appropriately called “With Knife! A Report Exposes Assad’s Massacres against Civilians.”

“With Knife!” is a field report that addresses the bloody massacres committed by the Assad regime to suppress the Syrian Revolution using primitive weapons such as the knife, sword and axe. The report points out that the Assad regime has been using all types of weapons that range from primitive to the chemical since the start of the revolution in March 2011 in an attempt to “crush the revolution and extinguish its flames, but without success.”

According to the report, the Assad regime carried out 20 massacres using primitive weapons since the start of the revolution, where 2885 civilians were slaughtered, which indicates the sadistic nature and brutality of the Assad regime. Additionally, the report concludes that more than 150,000 Syrian civilians have been killed since the start of the revolution. (Source: Syrian Coalition)

“No more, enough is enough!”

Video of a Regime Attack on Nabek 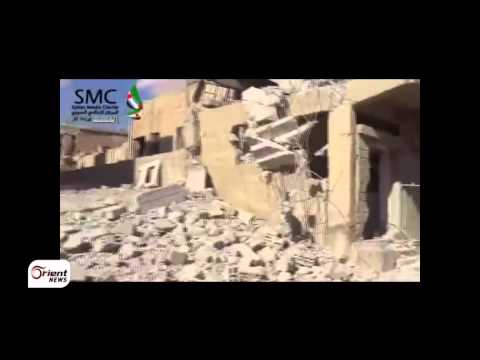