Barely hours after the signing of an interim agreement in Geneva to temporarily freeze Iran’s nuclear enrichment programme, Iranian President Rouhani said the interim deal recognised Iran’s nuclear “rights.” The BBC reported that Iran has agreed to curb some of its nuclear activities in return for about $7bn ( Pounds 4.3bn) in sanctions relief, after days of intense talks in Geneva.

US President Barack Obama welcomed the deal, saying it included “substantial limitations which will help prevent Iran from building a nuclear weapon.”

Iran agreed to give better access to inspectors and halt some of its work on uranium enrichment.

Iranian President Hassan Rouhani reiterated on Sunday that Tehran would not give up what it sees as its right to enrich uranium in nuclear negotiations and said the Islamic Republic would not bow to “threats” from anyone, Iranian media reported.

A day before agreement was reached, Rouhani told Iran’s Parliament that Iran had told its negotiating partners, “We will not answer to any threat, sanction, humiliation or discrimination.”

It corrected itself when it went on to say that “the United States and five other world powers announced a landmark accord Sunday morning that Iran would temporarily freeze Iran’s nuclear program and lay the foundation for a more sweeping agreement.” The key word here is “temporarily” which means both sides are in it for the long haul.

It was the first time in nearly a decade, American officials said, that an international agreement had been reached to halt much of Iran’s nuclear program and roll some elements of it back.

Last week Iranian parliamentarians gathered signatures to demand that the government carry on enriching uranium to levels of 20 percent.

According to Al Arabiya News; Iran said on Saturday just 24 hours before agreement was reached that it cannot accept any agreement with six major powers that does not recognize what it describes as its right to enrich uranium, a demand the United States and its European allies have repeatedly rejected.

The Iranian Deputy Foreign Minister Abbas Araqchi told reporters that in the past 10 years, Iran has resisted economic and political pressures and sanctions aimed at abandoning its enrichment activities.

Therefore he said any agreement without recognizing Iran’s right to enrich, practically and verbally, will be unacceptable for Tehran.

Within the Middle East, Israel is dead against the deal. In Saudi Arabia the perception is that the Iranian nuclear programme is designed to threaten Saudi Arabia and its allies in the Gulf. In the wider Middle East, Iran is not trusted. Most observers believe a temporary agreement will be flouted as soon as the six-month freeze is over. Iran will resume its enrichment programme without facing severe penalties. Most Arabs believe a stronger Iran would be better able to keep the butcher of Syria Bashar al Assad in power and also threaten its Sunni adversaries such as Saudi Arabia and the UAE.

A Long History of Prevarications

The Iranian rigid position is not new. In 2006 the Iranian leadership announced the successful enrichment of uranium. The UN Security Council passed several resolutions on Iran insisting that it ends its enrichment activities.

Back in November 2006 Iran had vowed to resist international pressure and threats after the International Atomic Energy Agency decided to put the issue of Iran’s nuclear program before the UN Security Council. Ayatollah Ali Khamenei, the supreme religious authority and spiritual guide in Iran, attributed the pressures on Iran to U.S. hostility towards Iran; when the U.S cut diplomatic relations with Iran in the wake of the 1979 Iranian revolution that saw American diplomats taken hostage for 444 days. The Islamic Republic News Agency reported 3rd November 2006 that The Expediency Council Chairman Akbar Hashemi Rafsanjani said “We cannot be intimidated.” Iranian President Ahmadinejad stated that his people will not yield to threats from Western States and that Iran will continue with its nuclear research program.

The report by the (IAEA) identified a suspect site where warhead components have been tested. This report was considered the most detailed presentation to date of its evidence for recent nuclear weapons research in Iran.

In December 2011 Iran threatened to close the Strait of Hormuz, a vital route for the oil trade, if the West widened sanctions against the country amid an ongoing row over Tehran’s nuclear programme. The head of the Iranian navy, Admiral Habibollah Sayyari, said it would be “really easy” for his forces to block the waterway through which 40% of the world’s oil flows.

But Britain’s foreign office dismissed the threats as “rhetoric” intended to distract attention from its nuclear programme.

The Strait of Hormuz links the Gulf oil-producing states of Bahrain, Kuwait, Qatar, Saudi Arabia and the United Arab Emirates with the Indian Ocean.

The US maintains a naval presence in the Gulf, primarily to ensure the oil routes remain open.

We must also remember that Iran is very skilled at dragging negotiations for ever and has a long history of ‘cat and mouse’ games with the West. According to the London Sunday Times Iran has for many years been running rings around the UN weapons inspectors.

At this critical stage, the World needs clear answers to the following: 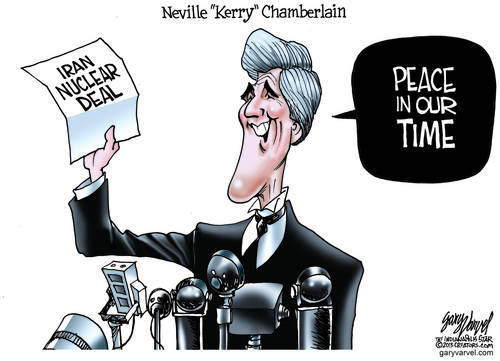