Iran has been teetering on the edge of deep unrest if not anarchy since late last year when sporadic and spontaneous demonstrations and rallies had hit some 80 cities and towns of a country in the grip of medieval ayatollahs steeped in false pride laced with bravado. After a lull, in the last few weeks the rumblings of unrest could be heard once again since Iranians were aware of the looming US sanctions following President Trump’s abrogation of the six-nation nuclear accord with Tehran.

The current level of unrest is not yet so virulent as to give sleepless nights to the ruling elite. Nevertheless the coming months offer no hope or succour to the average Iranian. They face soaring inflation and a declining rial which was trading at 42,000 to the US dollar yesterday against 100,000 just a month or so ago. Food and vegetable prices have almost doubled since January.

This is the situation in the first week of Trump administering the first of two body blows to Iran, reimposing sanctions to put “maximum economic pressure” on it. This first phase targets the purchase or acquisition of US banknotes by Iran’s government; Iran’s trade in gold and other precious metals; graphite, aluminium, steel, coal and software used in industrial processes; transactions related to the Iranian rial; activities relating to Iran’s issuance of sovereign debt; and Iran’s automotive sector. 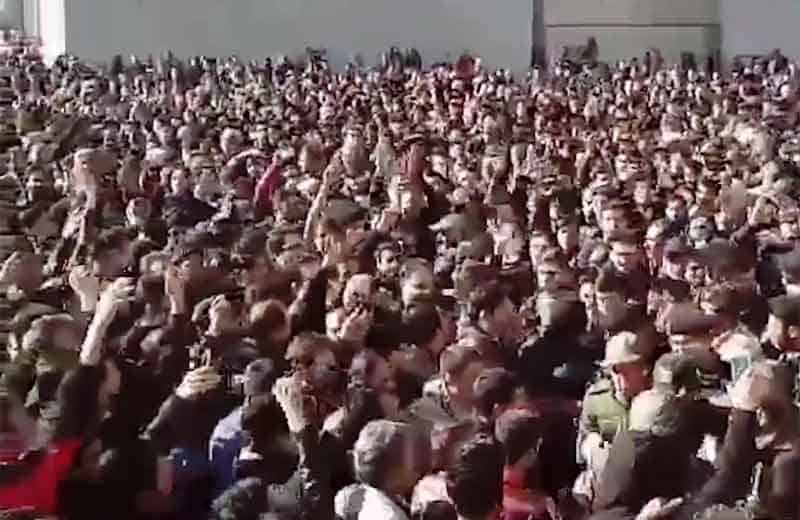 The second and tighter sanctions with more damaging ramifications will come into effect from November 5. Oil exports will not be allowed and transactions with the Iranian central bank will be barred. The idea is to contain Iran’s “regional ambitions, end their malign behaviour and deny them any paths to a nuclear weapon,” as a senior Trump administration official has been quoted as saying.

Add to this the rising scarcities – partly as a result of creeping sanctions – and unemployment and real or perceived rise in corruption and the ayatollahs don’t have to go far to seek a recipe for disaster with the spectre of an uprising on a scale last seen when the Shah was made to flee the country.

Inevitably the scarcities also bring to the attention of the affected populace the way the economy runs and the wealth of the nation is misspent. For one, it has not gone unnoticed that the government is in panic mode – it sacked its central bank governor, relaxed the foreign exchange rules then shut the currency markets then reopened them while making the dusty old threats of blocking the Arabian Gulf for oil exports by any neighbouring state.

Demonstrators raised slogans against their rulers’ “malign behaviour” of spending heavily on Hamas and Hezbollah, something which, in prosperous times, everyone looked upon as a mark of Iran’s regional hegemony in Iraq and Lebanon and support for anti-government elements in Bahrain. Radio Free Europe in a report has listed the chants heard in the videos of rallies sent to it and some of them would sound unthinkable a decade ago: “Death to Khamenei” [the Supreme Leader], “Death to Hezbollah,” and most interestingly, “Reza Shah, bless your soul,” hankering after the return of the pre-Islamic revolution days, reminiscent of the pro-Czar slogans heard at the time Soviet Union was breaking up.

Since it’s the deprived and the low-paid who are bound to constitute the bulk of protesters it might turn out to be a big loss of face for the ayatollahs who had labelled the anti-Shah protests 40 years ago as the uprising of the mostazafin or the poor against the Pahlavi dynasty.