NewsBlaze News
Home World Middle East To Save Aleppo, Turkey and Saudis Must Ignore Lame DuckThere Is No...

The United States is apparently working on “specific initiatives” to reduce the violence in Syria and sees stopping the bloodshed in Aleppo as a top priority.

Secretary of State John Kerry had made clear the U.S. wanted Russia to apply pressure to the Assad government to get it to stop “indiscriminate aerial attacks” in Aleppo.

However, last weekend Moscow’s foreign ministry told Interfax News that Russia will not ask the Syrian regime to stop the air campaign because the regime is fighting terrorism. Likewise, Iran continues to pour men and material into Syria to defend Assad.

The Syrian government has called local truces but excluded the main battlefield in Aleppo. What kind of cease-fire is it that allows Russia and the Syrian regime to continue pounding hospitals and schools at will and kill hundreds? It seems Kerry and Obama are oblivious to the fact that the ceasefire is a cosmetic exercise and the Geneva talks are a sham. Moscow and Tehran are calling the shots and all that Obama can do is to prevent the right weapons reaching the opposition. 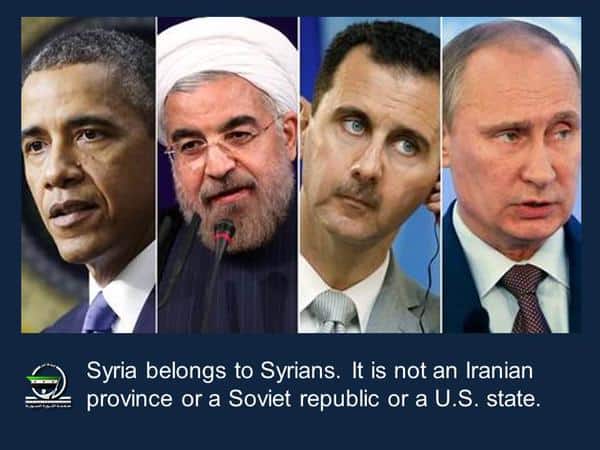 Last month Russia deployed heavy artillery around Aleppo in support of the Assad regime which suggests that a plan was already in place to attack the city. The Syrian Opposition believes the Russian brokered cease-fire was just another trick to win more time to gain military victories and dictate terms.

During his recent visit to Saudi Arabia President Obama made it clear that he was only interested in fighting ISIS. He pressured Saudi Arabia and Turkey not to provide quality weapons to the opposition.

Without any diplomatic process, the stage seems set for a further escalation.

There Is No Plan B

On 12th April the Wall Street Journal reported “the Central Intelligence Agency and its regional partners have drawn up plans to supply more-powerful weapons to moderate rebels in Syria fighting the Russia-backed regime in the event the country’s six-week-old truce collapses, according to U.S. and other officials … The preparations for a so-called Plan B centre on providing vetted rebel units with weapons systems that would help them in directing attacks against Syrian regime aircraft and artillery positions, the officials said.”

However, the opposition has been dismissive about “Plan B” saying it is talk with no substance. Furthermore President Obama has vetoed the delivery of the right weapons to the rebels by Turkey and Saudi Arabia.

In contrast with Putin’s aggressive intervention with air power on behalf of Assad, Obama has been cautious about expanding support to the moderate opposition, much to the chagrin of Turkey, Saudi Arabia and some other U.S. partners in the region.

The CIA’s covert program has grown gradually since it was launched in 2013 with limited supplies of small arms and ammunition. In 2014, the CIA introduced advanced antitank TOW missiles on the battlefield, helping the rebels gain ground on the regime, until Russia’s intervention last year drove the fighters back.

Saudi Arabia and Turkey have increased pressure on Washington to up the ante by calling for the introduction of weapons systems that they know are a red line for Obama, such as Manpads (Man-portable air-defense systems).

Obama Will Not Save Aleppo

They must do the right thing by providing the right weapons to the opposition. Anything else is a fudge and abdication of responsibility.