The Syrian Arab Red Crescent Chief Abd-al-Razzaq Jbeiro has been shot dead on the road to Damascus.

According to media reports, Mr. Jbeiro’s vehicle marked with the Red Crescent emblem was apparently targeted on the highway between Damascus and Idlib.

Syrian state television pointed “terrorists” for the death of Abd-al-Razzaq Jbeiro, highlighting that he’d been assassinated.

Mr. Ban extended his condolences to Mr. Jbeiro’s family and colleagues. He called on the Syrian Government to investigate the crime and bring the perpetrators to justice.

Mr. Ban also reiterated country’s obligation to “respect and protect humanitarian workers as they perform their duties and impartially serve all those who are in need.”

Last week, Secretary-General Ban Ki-Moon renewed his call on Syrian leadership to end the ongoing bloodshed in the country.

The United Nations says more than 5,000 people have been killed in Syria’s crackdown on protests which erupted against Assad in March, inspired by uprisings that toppled three Arab leaders last year.

Syria says 2,000 members of the government forces have been killed by “armed terrorists.”

The unrest along the ceasefire line is taking place as violence continues to escalate within Syria, where the Government continues its crackdown against pro-reform protests that are part of a broader uprising across North Africa and the Middle East.

The Syrian Arab Red Crescent (SARC) is a humanitarian organization and an auxiliary team to the medical service of the Syrian Army. Its headquarter is located in the Syrian capital city of Damascus. The society was founded in 1942. It was admitted to the International Committee of the Red Cross in 1946. 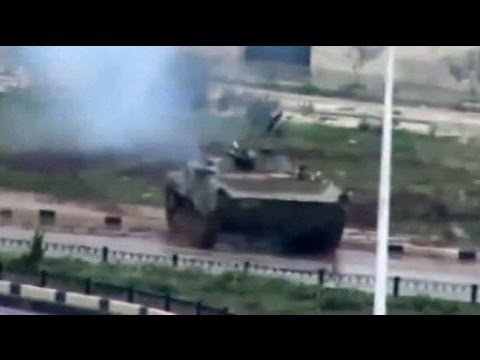