In recent days, rhetoric of war has escalated between the US and Iran. The US naval warship USS Lincoln is said to be moving towards the Persian Gulf. America has also accelerated the work on development of a 13.6 tonne Massive Ordnance Penetrator bomb, which is capable of destroying the underground nuclear facilities of Iran.

The efforts to isolate Iran and cripple its economy have been going on for years. Notwithstanding the sanctions and embargoes imposed by the West, Iran has sustained and expanded its nuclear program. While Iran has repeatedly insisted that its nuclear program is for peaceful purposes, the US claims that Tehran is clandestinely involved in developing nuclear weapons which would pose threat to the global security. 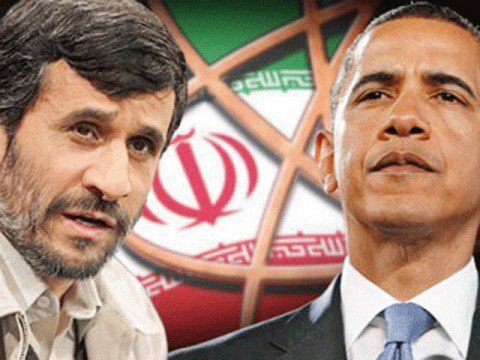 Tensions between the US & Iran reached to new levels recently when Iranian President Mahmhoud Ahmadinejad launched indigenously produced enriched uranium fuel rods in Tehran. He also announced the setting up of four more nuclear reactors. This is seen as Iran’s way of showing the West that it has advanced its nuclear program based on indigenously developed technology.

After this technological feat achieved by Tehran, the US has once against called upon the international community to sever its ties with Iran. But Ahmadinejad is apparently unfazed. He announced, “Some 6,000 centrifuges were operating (in Natanz facility), 3,000 new ones have been added – bringing the total to 9,000.”

Although he also assured that Iran would share this information with the International Atomic Energy Agency (IAEA) & comply with the IAEA safeguards. Daring the US, Ahmadinejad asserted, “The era of bullying nations has passed. The arrogant powers cannot monopolise nuclear technology. They tried to prevent us by issuing sanctions and resolutions but failed.” He also tried to convey that America is no more all powerful and if need arises, Iran can teach a lesson to it.

Iran’s nuclear program is not new. It dates back to 1960s. But after the Islamic Revolution of 1979, it had to be stopped. It was revived after 1990 and has progressed notwithstanding American sanctions. Washington accuses Tehran of clandestinely developing nuclear weapons in the garb of its nuclear program in violation of the Nuclear Non-Proliferation Treaty (NPT). But not all countries are ready to tow this American line on Iran.

Its main reason is that the claims of the US regarding Saddam’s Iraq possessing Weapons of Mass Destruction (WMD) were found false and they acted just as an excuse to topple Saddam regime. Therefore, majority of the countries are not ready to believe America again on Iran issue. Moreover, it is well understood that Washington is just trying to secure Israel by circumscribing Iran’s increasing strength in the region.

In December, Iran shocked the world when it claimed to have landed an American drone which it said, was spying into Iranian airspace. Embarrassed Pentagon said that the drone crossed into Iranian airspace from Afghanistan owing to a technical snag. In latest revelation, Iran has said that it possesses six American drones, which it has landed by deploying Iranian communication technology. Iran has also announced that very soon it will exhibit those drones.

In January, an Iranian court issued a death sentence to an American of Iranian descent convicted on charges of spying for the Central Intelligence Agency. On January 11, an Iranian nuclear scientist died in a “terrorist bomb blast” in northern Tehran when an unidentified motorcyclist attached a magnetic explosive device to the scientist’s car. Iran once again indicated that it believed the United States and Israel were responsible for this killing.

Tensions escalated recently when Israeli officials blamed Iran for bomb attacks in the capitals of Georgia, India and Thailand targeted at Israeli Embassy personnel. Evidence suggests that the bombings were part of a single plot, for which Israel has blamed Iran. Iranian officials, however, have denied any involvement & instead accused Israel of conspiring these bombings.

In fact, Israel also wants the US to attack Iran and destroy its nuclear establishments and in the process weaken its military. Washington is not only increasing international pressure on Iran through sanctions, but also encouraging domestic opposition against Ahmadinejad’s government within Iran. Washington expected New Delhi to stand with it on Iran issue. But taking a clear stand, India has politely rejected the American suggestion and instead called for a diplomatic route to break this deadlock. Big countries like Russia, China and India are apparently standing with Iran as far as the option of military action is concerned.

As American allies, countries like France, Spain, Italy, Greece, Netherlands and Portugal proposed to stop oil imports from Iran from July onwards. They estimated that Iran could be made to fall in line using such threats. But their policy seems to have boomeranged as Iran has decided to stop crude exports to these countries with immediate effect. By this step, Iran has tried to prove that it is strong enough economically and doesn’t care for any threats. This standoff between the West and Iran is a matter of serious concern in the times of global economic slowdown and a danger of looming recession. Many questions are striking people’s minds such as why Iran is refusing to bow down under American pressure? Does America consider Iran as another Iraq?

Does Iran treat American threats as mere hollow rhetoric? Facts suggest that after America’s rout in Afghanistan, groups like Taliban have stopped fearing it. Its claim of Iraq possessing WMDs was found to be a sham. Added to this, economic slowdown has crippled Washington’s ability to get involved in other such needless wars. Perhaps this is the reason why Iran is openly challenging the American hegemony.