The latest country report relating to Bahrain on human rights practices – an annual ritual – submitted to the US Congress last week by US Secretary of State John Kerry has deeply hurt and upset Bahraini lawmakers and activists. Some of them have called the Rights Report biased, based on old data, and one that ignores the latest information as well the reality on the ground.

Considering that the report emanates from the US, its impact on a country’s image is profound and this is the most galling aspect. The outrage has been such that one Bahraini MP has been trying to seek an appointment with the US ambassador to confront him about the report.

For instance, the report criticizes Bahrain’s rights practices citing 2014 parliamentary elections, the revocation of passports of 72 citizens, many of them terrorists, says the legal system is lacking and alleges restrictions on free expression and assembly. But Bahrain Parliament’s foreign affairs, defence and national security committee vice-chairman MP Jamal Bu Hassan has been quoted in the local Press as stating: “We do not have such bleak rights conditions and it is highly unacceptable that our country is painted so badly in front of the world.”

The report also claims there is a lack of judicial accountability for Bahrain’s security forces, discrimination based on gender, religion and nationality, and little protection of foreign workers’ rights.

US Rights Report Is Biased

But the catch is the report ignores a number of crucial aspects about Bahrain and twists a variety of facts. Thus, while railing against Bahrain, it ignores one key factor: the recurrent targeting of Bahrain by Iran-inspired and Iran-aided terrorists; that it is a tiny kingdom fighting against all odds to retain its sovereignty and peace in the face of a belligerent Iranian establishment not to speak of the terrorist groups such as the Hezbollah and the ISIS targeting it.

As political activist Abdulla Al Huwaihi said which speaking to the local daily GDN: “The report speaks of sectarian crisis whereas what we have is a terror crisis created by a minority fuelled by groups with an agenda against the nation.” 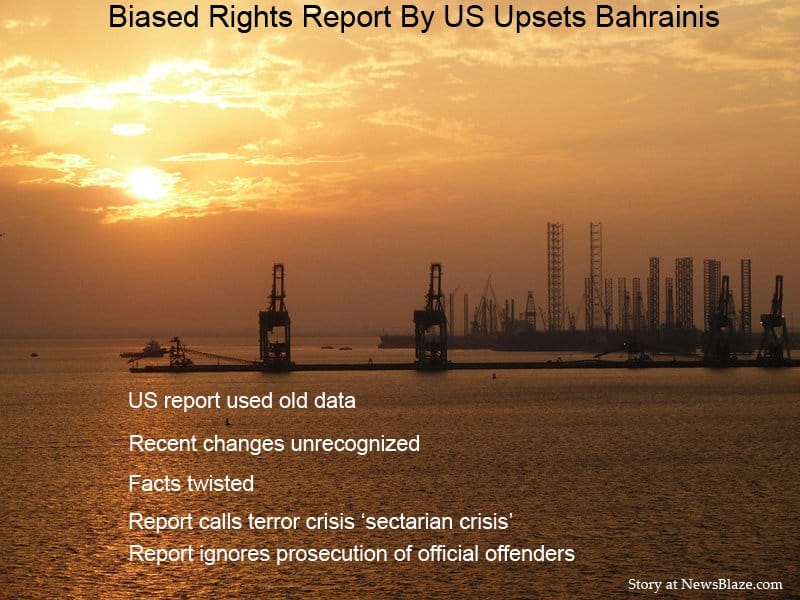 Coming to the specifics, there have been numerous instances when security officials have been punished by the courts but the report does not want to know about those cases. The passports have been revoked in the case of terrorists convicted after the due process of law. In one case a terrorists who had sought sanctuary in the UK was convicted by a court there as well.

Only Bahrian Ensures Fair Play For All

If there is one country in the region which has gone out of the way to ensure security and fair play for foreign workers, for women, for the widows and the elderly, and for followers of religions other than Islam it is Bahrain. It is the only country among the six littoral Arab states which permits a foreign worker to switch job for a better prospect without him/ her having to leave the country for six months to a year thus doing away with the virtual bondage by unscrupulous employers. Even during the six-month amnesty declared for illegal workers to allow them to leave Bahrain without fine, the government told them to find jobs if they could and regularize their status.

The country also allows houses of worship and practice of all religions, including Hinduism, Sikhism and Judaism and cultural clubs and assemblies of all denominations are freely permitted. Even the right to demonstrate and protest is allowed – what is not allowed is when a group obtains permission to bring out a peaceful rally along a particular route and then turns violent and chooses a route of its own.

The report also does not take into account the fact that in the wake of the troubles in February 2011, the King had set up a Bahrain Independent Commission of Inquiry where all its members were non-Bahrainis of impeccable judicial and legal backgrounds and their recommendations were implemented without demur and are still being implemented and the report itself, though in part critical of the government, was allowed to be posted on a website accessible to all.

Bahrain Cares for Its Own and for Foreign Workers

Bahrain is a nation which cares for its own, for their welfare and peaceful life, and it cares for its foreign workers equally diligently since they constitute nearly half the Kingdom’s population. It is a nation confident of its economy, is open to business and investment opportunities and is conscious of its profile and in such a scenario it very well realizes it would be foolhardy to suppress rights, ignore unfair practices and be lax in the functioning of its judicial system.