Last night at the Beverly Hills impressive home of Leona and Joe Fallas, members of the Magen David Congregation of Beverly Hills, gathered to raise the $125,000 sum needed to purchase an intensive care unit ambulance for Magen David Adom, Israel.

In front of the house, an intensive care unit ambulance was on display for the people to see the fruits of their benevolent investment.

The ambiance for this fundraising evening reached almost perfection; great weather with lovely setting in the garden. Yaakov Levy Music, with Don Littleton on frame drum and percussion and Yaakov Levy on alto clarinet and flute provided the background music and the exquisite range of food was prepared by the chef Adam Dwezk, the Fallas’s grandson and his mother, Joy, the Fallas’s daughter, to the greatest and good looking crowd. But that is not where this essay leads to. It is really about building the state of Israel and the nation of Israel, one ambulance at the time. 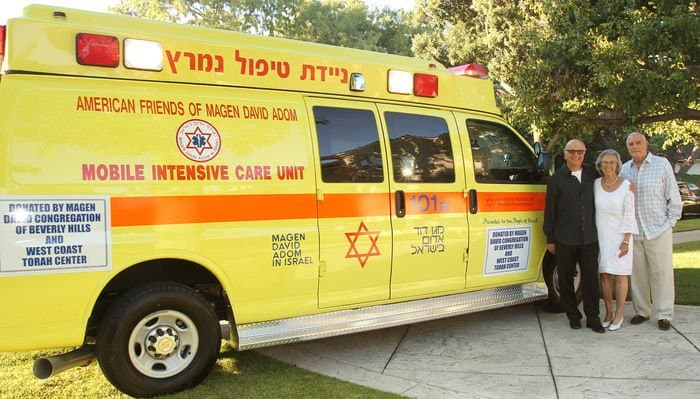 As members of the Magen David Congregation, the Fallas’ could not think of a better cause than to purchase an ambulance unit for the use of Magen David Adom, Israel. After all, at time of war, Kind David wore a shield of protection with the Jewish star (Magen David), now known as the Star of David, etched on it. The Star of David is not only the Jewish nation’s national symbol, it is also its protection symbol. So the idea of bringing the Magen David Congregation to contribute to Magen David Adom, Israel, for one more ambulance unit that can be there to protect and save life is a perfect combination for a perfect cause.

Magen David Adom is seventy two years old organization. It was in operating before Israel was declared a state. The organization, with branches all over the world, operates due to donations’ money only. Six years ago Magen David Adom was accepted as a member of the International Red Cross-Red Crescent Organization. Now, the Red Star of David is its equal member in the organization for the world to see and know that the Jewish Nation is growing stronger and has one other international recognition to be proud of.

The ambulances Magen David Adom use are built in Indiana, USA. An intensive care until is manned with three medics who, in time of need can even perform an operation in the unit while instructed by the doctors from the hospital. A donated unit will be shipped to Israel as soon as it was ordered and built.

In the past the units were white and today, for better recognition at night, the units are yellow in color with the red star painted on them. During the 2010 Haiti earthquake, Magen David Adom was first among nations to have dispatched to the stricken area twenty-five doctors and medical staff to help save lives.

When we get together to do good things good things are accomplished. Putting dollars into life is even better than just doing good things. The fact that a Kehilla (Community) is engaging in buying an ambulance means benevolence, charity and saving lives. For Jews, there is no higher Mitzvah-good deed than this one.

Other force behind the fundraising event were Debbie and Jacob Segura, the president of Magen David synagogue, in Beverly Hills; of course, the American Friends of Magen David Adom volunteers, were in attendance: president Barak Raviv and Yossi Mentz, Western Regional Director.

When Joe Fallas spoke he emphasized the fact that the ambulance they will purchase and send to Israel will be put to use where there is the greatest need for one; where there is no ambulance yet.

The young and eloquent rabbi, Joseph Dwezk, the Fallas’ grandson, was the main speaker and carried a profound message. He emphasized the fact that starting on the seventeenth of Tammuz, the three weeks leading to Tisha Be’Av, which is the day the Jewish people commemorate the destruction of their temple, have special meaning of unease to the Jewish people; they are the days between the straits. Kehillat Magen David responding to the needs of the Jewish State’s citizenry is a greater mitzvah during these days. And so the event had a special meaning too. The Jews have claimed their name as a nation, not a religion, and are investing in life so that life invests in them. Helping building the state of Israel, buying a Magen David Adom ambulance that will shield the Jewish people.

Building Israel, one ambulance at the time, is part of the greater duty of the Jewish people to do, which is Tikun Olam, to repair and improve our world.

Insha’Allah is an Arabic word its meaning God willing. Many in the crowd were Jews whose ancestors came from Middle East and north Africa countries. While sitting and listening to few presentations someone said, “Insha’Allah,” a term used even by Jews who lived in Arabic speaking countries. And indeed with God willing we will continue building Israel, one ambulance at the time, one Mitzvah at the time, Insha’Allah!

The state of Israel is young and we have not yet finished putting her on her feet. Magen David Adom needs our constant help; an evening like this one can only fill one’s body and soul with rejuvenated and invigorating energy and many good reasons to continue the mission we began in 1948, to lend a hand to building Am Yisrael-the nation of Israel in Eretz Yisrael-the land of Israel.