A debate has gripped the state of Israel, in which its citizenry demand equal share of the burden of serving in the military. That requires passing a law, along which ultra-Orthodox men, known as Chareidi, must be drafted into the Israeli army, ending an exemption that has lasted for 64 years and has enraged all other citizens who are obliged, by law, to serve in the military.

The debate has brought to light the Israeli Chareidi faction’s struggle for survival.

No matter what the outcome of the legal battle for equal share of the burden will be, for a Chareidi man, remaining sitting all day between the walls of study rooms does not provide the means to survive. With the government of Israel cutting short the welfare allotment for the Haredim faction’s family, today amounts to $500.00 a month, many have found themselves lacking vocation skill and simply unable to support their rather large family. Time of despair have hit many. Additionally, getting a job without having a record of military or national service disqualifies one from getting a job and thus leaves a Haredi man between the rock and hard place.

But there is a solution its doors have been opened twenty-one years ago. It is Lomda, the Chareidi Institute for Vocational Training, located in the heart of Jerusalem, Israel – (www.lomda.org). Lomda is the first Chareidi vocational school in Israel; it began with teaching women only and today there are 900 men and women students and the need to accommodate more is at all time high. The women learn during the day and the men in the evening.

Last week, at a breakfast meeting that took place at the spacious and charming Beverly Hills home of Sandra Stein, I met the Lomda Institute management team: Rabbi Asher Klitnick, the Director of Development, Rabbi Moshe Shapoff, Director Institutional Advancement and Michael Winnett, Director of Academic Affairs. The three Chareidi men have presented to the audience a new side of the Chareidi society.

Though, the Hareidim place in Israeli society is one of the most burning issues in Israel today, to hear a Rabbi calling on his students to participate in the work force is very rare. That is exactly what Rabbi Klitnick does. He is a firm believer that the overwhelming majority of the Chareidim must combine work with Torah study. What Rabbi Klitnick is doing is attempting to cure a problem in Israel by helping the Chareidim learn a vocation and enter the workforce. With having a job the share in the burden will be solved. The idea is simple: to help as many Chareidi men and women to be self sufficient, earn a living and gain the respect of the rest of the nation. Having a vocation that leads to having a job means being able to support one’s family with dignity, and thus helping Israel’s economy. It also helps achieving A’havat Israel-the love for Israel, national unity and more collaboration between the Chareidi and secular factions in Israel.

Lomda gives the Chareidim the fishing rod to be able to fish; learn a vocation that will make them self sufficient.

Lomda helps the Chareidi and secular factions to finally meet on mutual grounds and become a more united nation.

It is a simple equation; when the Chareidim become a work force the economy of Israel strengthens, as there is less welfare recipients and more contributors who pay tax, rather than receive the taxpayers’ money.

So how does it all begin? It is simple.

In time of need, which has become the call of each day, a Chareidi men or women come to Lomda to learn how to create livelihood. The rule is not to pull the Chareidim out of the yeshiva. When the yeshiva rabbi sees that the student is not going to become a biblical scholar or a rabbi, he will suggest to seek a vocation. A vocation can be acquired at Lomda. At the school the applicants receive the necessary guidance, get assessed as to what skill they have along which they can learn a profession that will put food on their table. Whatever vocation they learn they will be compatible in the marketplace.

According to the law of the land, one has to have served in the military or to have gone through national service program to be able to get a job; that means give back to the country. And here is where the ends meet. No job to survive without sharing in the burden.

Such integration, that was lacking since Israel became a state, requires patience. It is not an overnight transformation.

Jews who made Aliya, immigrated to Israel from all four corners of the world, did not become Israelis over night. It behooves the Israeli to see the Chareidim as new Olim-immigrants. After all they have lived as a separate society, not as part of the nation as a whole, for 64 years. A graduate from Lomda will be able to become an equal citizens, a real Israeli.

The school offers many courses across the vocational spectrum such as, bookkeeping, computer and high tech, graphic arts, photography, filming, advertising, real estate, finance, electrical, technicians, culinary arts and baking, publishing and others; it even offers a wine making course which already produced eighteen successful wine makers. The school holds an amazing 85% success rate of graduates receiving an official government vocation certificate and then finding a job. Lomda’s future is shining and bright; it has already huge positive effect on the Chareidi community and is helping the Chareidi faction to make inroads in the Israel economy and society.

There are eight levels of charity and the greatest level, above which there is no greater, is the support for fellow Jew until he needs no longer to be dependent upon others. ~Maimonides.

When a Chareidi man or woman obtain a profession they begin a new trend. They set an example for the entire family and their community. With it, the new generations will already have a mindset of earning a living combined with studying Torah. No more living on the dole rather an open door to better future.

The Lomda Institute needs to amass more scholarships so it can take in more students. A scholarship could be from $1,000 and up to $6,000 depending on the course. If a student takes a Bachelor Degree course the government of Israel will subsidize his or her studies, but not a vocation course.

And this is what Lomda Institute needs: to help to put as many Chareidi men and women on their feet so they can integrate in Israeli society and help bring about Shleimut Am Yisrael-the unity of the nation of Israel, for the state of Israel, the whole. 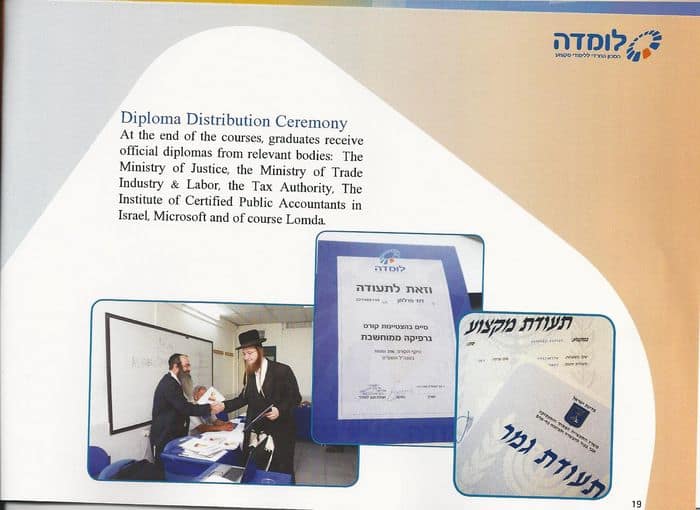