Israel takes care of its own and we need to make sure the world understands that Israel is strong and WILL take care of every single one of her citizens. If the world wants to help, let them show it, in deeds.

President Shimon Peres said: “Israel has the means and the will to silence terror organizations.”

One of the photos I saw shows Israelis injured in the terror attack on the bus they got on at the airport in Bulgaria yesterday, July 18, 2012. There were medical personnel, just to the back of the lady in hospital gear, who had the insignia of Magen David Adom and just to her right there is an IDF soldier.

Within several hours of the incident, two Israeli Hercules airplanes landed in Bulgaria with 25 medical personnel, and about 100 police and army people to provide the medical treatment and security the injured Israelis needed, as well as to assist the Bulgarian authorities to launch the investigation, as to who was behind it. 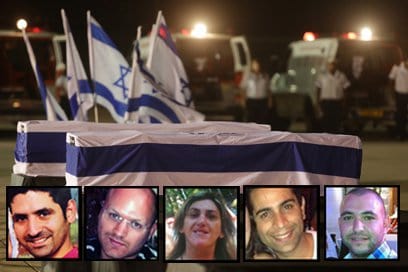 Israel’s short distance to Bulgaria certainly helped the immediate dispatch of help, but there is no other country in the entire world, with both the will and the ability – and unfortunately the experience – to assist its citizens, on short notice, wherever they are and under any circumstances they find themselves that requires immediate help.

Though we are always so saddened by the senseless loss of life and the many who were injured, at the same time, we are so very proud of how we, Jews, take care of our own as we do.

Am Yisrael chai – The Jewish nation is alive and thriving.

Watch and hear PM Netanyahu’s Statement about the Terror Attack in Bulgaria.