Three young and fascinating rabbis, speaking to a large audience at Nessah Synagogue, in Beverly Hills, can convince you that being a Jew is a privileged pride.

This week, Rabbi Zamir Cohen‎, Rabbi Yitzhak Fanger and Rabbi Yosef Mizrachi, leaders of the Hidabroot Internet Channel (http://www.hidabroot.org/), each is his own way, sold the audience refreshing Judaism, based on Simeon bar Yochai ‘s- one of the most eminent disciples of Rabbi Akiva -wisdom, who is attributed with the authorship of the Zohar, the chief work of Kabbalah.

For me Hidabroot – its goal is to simplify the Holly Book Torah so every ear can hear and understand its essence – was a new revelation, but it appears that this organization has sizeable audience. Some see the rabbis who lead this movement as Judaica stars.

One can listen to these three Bible and Kabbalah scholars for uncounted hours and for that they travel the world, participate in countless speaking engagements and bring the lost Jews back home, to Judaism. How? They explain the Bible is such a way it is no longer religiously forced upon you; it simply makes sense to those who question the Torah and the God Who gave it to his children, the Jews.

Rabbi Yitzhak Fanger, originally a secular Israeli through and through, told his fascinating personal story of how he became an observant Jew. 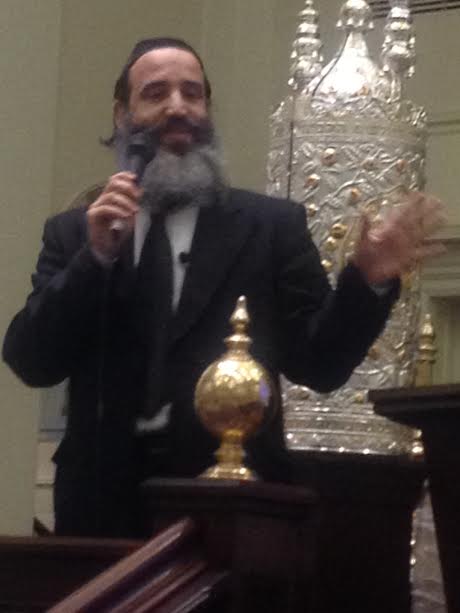 Rabbi Yosef Mizrachi spoke about the relations between God, you and money.

I choose to go over Rabbi Cohen’s topic of Torah and science. Because if you “get it,” next you will begin your journey to come home.

Till 80 years ago scientists claimed that it was impossible that the world was created from nothingness therefore, it always existed. But 80 years, the theoretical physicist and cosmologist George Gamow, started to advocate and develop the Lemaitres Big Bang theory. Scientists began to believe that the world was an instant creation, a result of a Big Bang, that from nothing something was created, just like in Genesis and the story of Creation by the Almighty.

From the time the Nation of Israel accepted God, they have claimed that God is omnipotent; now people are beginning to believe in what the Jews have been believing for over 3,000 years.

Only 350 years ago it became evidently known that millions of years ago giant animals – the dinosaurs – roamed planet Earth.

But the Zohar tells us, already 2,000 years ago, that two rabbis walked into a large bone of a huge animal and came out on the other side of the bone. Already then Jews knew that there were huge animals that disappeared from the fauna. Judaism claim that such bones and such huge skeletons remained after the Big Flood at the time of Noah to remind, us, human, what will happen if we do not believe in God. When Noah gathered the animals- two of each – into his Ark, he could only take in baby dinosaurs, as the adults were too large to fit in the Ark. During that Flood, the dinosaurs were wiped out and those who came out of the Ark were in small in numbers to eventually become extinct.

In Rhodesia, today Zimbabwe, they discovered caves with detailed drawings of dinosaurs that science claim to have vanished off the face of the earth 65 million years ago. So how come people painted these animals? They saw them before the Flood and the story about Noah.

You get it? The Torah and the Zohar are scientific books; there is no contradiction between science and the Torah, which brings me back to remind the reader, be proud of Judaism. It is not backwards, it is not primitive. It is supreme.

In Genesis Chapter 1:9-10: 9-And God said, “Let the waters under the heaven be gathered together unto one place, and let the dry land appear: and it was so. 10-And God called the dry land Earth; and the gathering together of the waters called the Seas.” One large dry surface surrounded by water. The Zohar, 2,000 years ago, already dealt with seven continents. As we know today, the one large surface of God’s Creation broke into what is known today to be the seven continents surrounded by seas and oceans.

Beginning to get it? To see the light?

Genesis chapter 2:7 deals with the creation of man. “And the God formed man of the dust of the ground, and breathed into his nostrils the breath of life; and man became a living soul.” What Judaism tells us is that man was created from dust and God gave his soul life. When a man dies, his dust remains on earth and his souls returns to his Creator. Meaning, the human being body is simply the clothes and the real person is his spirit, his soul – the real Me – that lives in the body, the clothes.

God created man to make good in the world. But evil inclination rules the world and thus man does silly things and pays with bad that comes his way. The human body serves as a fitness device that builds the soul while the person is alive. From the time a man is born the soul has work to do and develop while inside the body. The more good work one does, the better it will be upon returning to the Creator. The theory is that everything in the universe contains a spiritual spark. When one eats the body gets material spark while the mind receives a spiritual spark. The food builds the body that houses the soul, the real human being.

A true believer throughout life accumulates spiritual assets which will serve him/her in this world and the next world.

A cute story sums up this lesson. Twins in their mother’s womb having a chat. One is a believer and the other one is not. The believer tells his non-believer brother that when he gets out he will lose the umbilical cord and the comfort of the womb but it will be replaced with the protection of Divine. The non-believer brother does not want to come out because he believes that leaving the womb means death. The believer brother is born first and as expected the Mother’s umbilical cord was replaced with the protection of Divine; he was not afraid of changes. Few seconds later the non-believe is pushed out to face God and his fears, for being a non-believer.

Do not be afraid of changes and be not afraid to find your Judaism. Pray to be close to God and work to get closer to Him.

Judaism is not scary; it is an ocean of spiritual wealth you need to learn to swim in.

We, Jews, were given a gift, it is OUR God Who appears to Abraham and Moses.

All we need to do is pray each day to God to give us the right livelihood that will bring us closer, and closer and more attached to Him.

Start right now! You have nothing to lose and all to gain.