Willing to pay the price for being honest.

Many all over the world claim that Israel is an Apartheid state. How true it is you can ask MP Reverend Kenneth Meshoe, a 19 years veteran member of the South Africa government and the head of the African Christian Democratic Party and his wife Lydia and daughter Esther.

It is very frustrating to the many people who support Israel to constantly hear those claiming that Israel is operating a governance Apartheid system. They are insulted and humiliated but they have no tool to refute or dismiss this claim.

A group of these frustrated people gathered at the beautiful and hospitable Beverly Hills home of Daphna Ziman and Rod Sherwood to get a first hand explanation what Apartheid is all about and how to rebuttal this libel against Israel. After all Rev. Kenneth Meshoe, his wife Lydia and daughter Esther are people of dark skin who have all lived under the South Africa Apartheid regime. They have been to Israel ten times so they can clearly and easily dismiss this accusation.

When you hear the Meshoes’ speak you are mesmerized, not only because they are impressively looking people, but also because of the truth and core belief they speak out. Each one, on his own, is an advocate for Israel. They are not only fighting on behalf of Israel, they are fighting their own government that has been, since the Apartheid system was abolished, following anti-Israel policies. 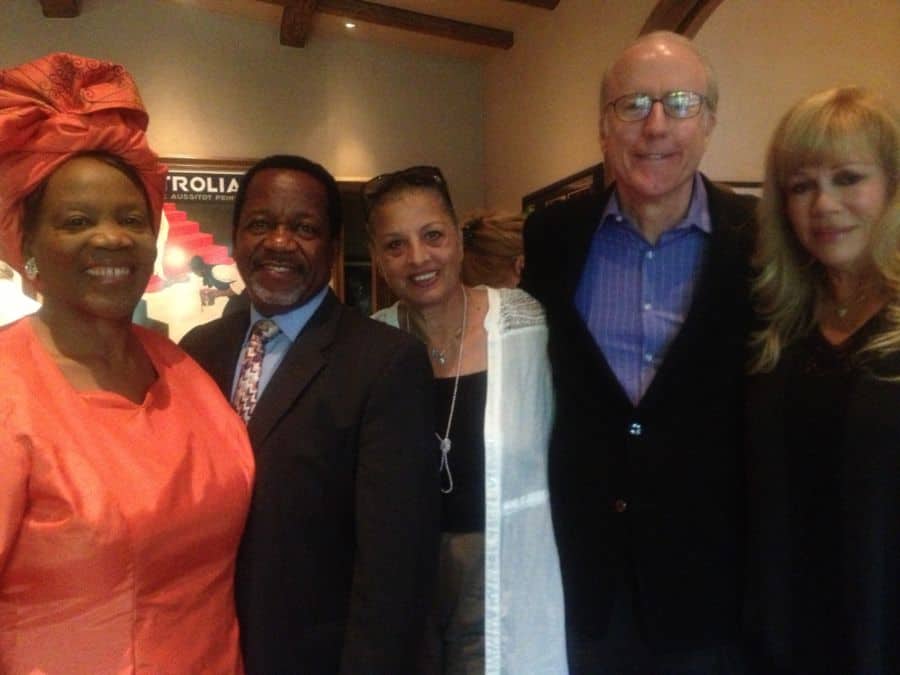 The daughter Esther, and how appropriate her name is, is the rebel and a self appointed PR officer of the family. Around her neck she is wearing, ostentatiously and with pride, a Star of David-Magen David-Menorah combination medallion. “I wear and expose my Magend David medallion while many South African Jews will not dare to wear such Jewish symbol,” she tells me. “I am not afraid of anyone. I am proud to be associated and a defender of Israel.”

In South Africa the Boycott, Divestment, Sanctions (BDS) movement against Israel, which the Zionist Organization of American (ZOA) and the Anti-Defamation League (ADL) call anti-Semitic, are a small group with a very loud mouth. Rev. Meshoe works relentlessly to quiet their big mouths. “People in South Africa government know the truth about Israel but they are scared what the opposition will say so they chose the easy road out of being politically correct,” he states.

“To me Israel is a second home and standing for Israel is a great cause,” exclaims the Reverend. “If something is incorrect, the Meshoes’ will fight to correct it.”

“We have become a society dominated by taking the easy road and buys into lies. It is not able to tell the truth and is afraid of it and thus it compromises its own soul, ” states Rev. Meshoe.

The Meshoes’ are Christians who love Israel, the mother land of their religion. Their love for Israel is rooted in what they believe to be the truth. They believe that too many good men and women are too scared to stand for what they believe. They are not. They do what they do for the interest of Justice and the truth.

MP Meshoe has taken a short break from politics to establish his new organization DEISI International, its name stands for Defend, Embrace, Invest, Support Israel and it is designed to seek and use Israeli innovations.

The organization’s dictum is ‘Health Before Politics’ and its actions are to strengthen Israel, the exact opposite of what the BDS movement is set to do, to undermine and weaken Israel.

Rev. MP Meshoe is willing to put his head on the block for the truth. Recently the South Africa government decided on passing a law to label products from Judea and Samaria as been made in ‘Occupied Territories.’

That did not sit well with MP Meshoe’s party. They found the possible law to be flawed. The law was alleging that the labels will state the goods come from “alleged occupied territory” of Judea and Samaria; however, one cannot have a law that is based on the word “alleged.” Also, according to the South Africa Consumer Protection Act, the government made a mistake in the section on which the law is based, which applies to goods coming from a country and ‘Palestine” is not a country. MP Meshoe organized a protest, based on the facts, to which 2000 people, Christians and Jews showed up wearing a t-shirt on its front was printed: “Stop Attempting to Crush Israel” and on its back “Africans for Israel.” So far the law has not been passed, all because people are dedicated to the act of their conviction.

To Rev. Meshoe and his family giving up is not an option.

The African National Congress (ANC), the Republic of South Africa governing political party is regularly trying to blame Israel for the what is happening in the Middle East. To rebuttal this, as of recent, MP Meshoe’s and his African Christian Democratic party have made an amendment to the party’s constitution, now allowing Jews to join the party. Now Jews and Christians can fight the wrong perpetrated against Israel together.

“Wherever I see things are going against Israel I stand up,” says Rev. MP Meshoe. He wants to see African countries, influenced by anti-Israel Islamic ideology, turn around and cooperate with Israel. He believes that South African is powerful enough to take the lead this effort.

Many technologies that the African continent needs come from Israel. The most urging ones are water purification and pharmaceutical and health related, even such as modern circumcision device and contact lenses.

This is where DEISI International, its logo is a flower in the shape of the Magen-David, Jewish star and the Israeli national blue and white is its colors, comes in. It is set to convince African countries’ leadership that health comes before politics. Expose South Africans and throughout the African continent to Israeli technologies so badly needed in their countries.

Other mission of the new organization is send graduates to Israel to see firsthand that Israel is not an Apartheid states. Once they are convinced, these young leaders will return back home and will face the government and the people with facts and demand to end the misleading and lying. They will tell their government they are wrong and become spokesperson for the truth. “When the sting – the Apartheid – is taken out of the BDS movement their days are numbered,” he says.

MP Meshoe’s blames the politicians for the problem. “But you must fight them with a smile as it is difficult to fight anyone who has a smile on his or her face,” he says.

Being a devout Christian, MP Meshoe believes that Christianity’s roots are in Judaism and Israel. If you cut the roots the tree dies. He does not want to die so he fights, really fights against the many odds. Also he goes by the Biblical phrase: I will bless those who bless you, and whoever curses you I will curse; and all peoples on earth will be blessed through you. ~ Genesis 12:3

When one of the participants asked Rev. Meshoe how come even Nelson Mandela and Rev. Desmond Tutu speak at times bad about Israel, he replied, “People who are not principled can be bought. So when Tutu and Mandela have said bad things about Israel they were bought by the Arabs. Jews suppose to be light unto the nations, I am light unto the Jews.”

When I raised the question, how he will deal with Abbas declaration that he is seeking to establish the state of Palestine to be Judenrein, free and cleansed of Jews – and also Christians – Abbas wants ‘not a single Israeli’ in future Palestinian state – http://www.reuters.com/article/2013/07/30/us-palestinians-israel-abbas-idUSBRE96T00920130730, Rev. Meshoe’s reply was, “The United Nations Organization (UN) is not committed to justice. You cannot have a state where certain people are not wanted. A Palestinian state will not be able to exist without Israel. Wanting an Apartheid state is illegal and unrealistic, wrong and will fail.”

Esther Meshoe frequently uses the motto, “It is better to die defending truth than to live as a prisoner to lies.”

And that is what the Meshoes’ live by and fight for, dismissing the lies and replacing them with the truth. And who will not join them in their righteous fight?

The world is made of many good people who need to end their silence and the Meshoes’ are leading the list of those who are not silent.