This is the first in what will undoubtedly be a plethora of Steve Jobs films, and it’s a pity the filmmakers were in such a hurry to be numero uno that they ended up with an ordinary story about an extraordinary man. It’s watchable and occasionally entertaining but lacks authenticity and, if Apple does have any secrets, they’re yet to be told.

The film begins just after Steve Jobs (Ashton Kutcher) has dropped out of college. He gets a job in an electronics company and, unwilling to work as part of a team, he and his colleague, Steve Wozniak (Josh Gad), work alone on their first invention. After some initial success, the two branch out and set-up shop in Jobs’ parents’ garage. They enlist four colleagues to help them deliver their first computer order, and the iconic brand is born. 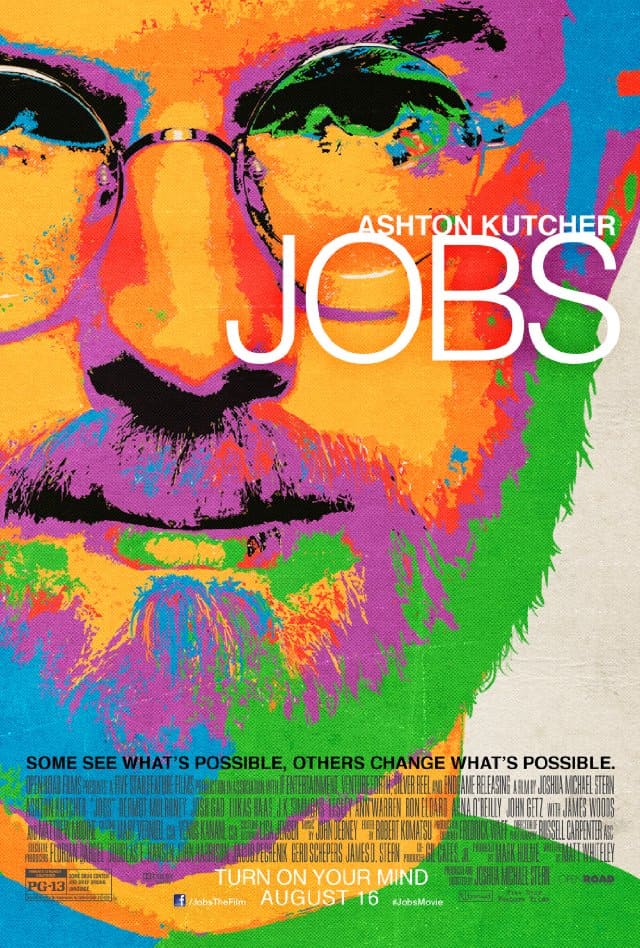 The most important aspect of a biopic is for the audience to relate to the subject, but instead of intimate moments, the opening scenes bombard us with endless montages that play out like snapshots. From beginning to end, we are never invited inside, and the surface of the man who impacted so greatly on the digital revolution is barely scratched.

In fact, there are no real insights of Jobs until we witness him throw out his live-in girlfriend, when she announces she’s pregnant. He demonstrates equal ruthlessness years later, when he refuses to give stock options to the very people who helped him launch his empire. No defense is offered for this behavior, so apparently the message of this film is, that it’s acceptable to act like a psychopathic despot, as long as the perpetrator is a genius. Charmed, I’m sure.

The only time that true drama is created is during the boardroom scenes, which leave the blood of executives spattered randomly over corporate walls. However, even before these interactions, it becomes clear that it was Jobs’ business acumen that created Apple, and not his engineering skills.

This is an interesting reveal, and Jobs is presented as a conflicted character when he wants to deliver the best, at the cost of profit. Had this theme of ‘having it all ways’ been embedded from the start, the audience could have watched as the hero became the architect of his own demise, and a Greek tragedy was born.

At the start is a short scene of Steve Jobs in his fifties, then flashes back to forty years before, but ends when Jobs is in his forties, leaving the circle incomplete. There are continuity issues throughout, which restrict the storytelling to such an extent that the big picture is never drawn. Such a lack thereof makes this a movie more suited to the small screen, and possibly something even smaller than a TV.