NewsBlaze News
Home World Israel A Call to Save Lives

Israel’s Ambulance fleet always needs renewal and that is the job of the nonprofit organization Magen David Adom (MDA), Israel’s national emergency medical, disaster, ambulance and blood bank services. With the threat, in real time, of terror and rocket attacks from the north, by Hezbollah, and, as we see these days, from Hamas in the south, Israel cannot afford to be short of ambulances.

Israel is now short of 100 ambulances and it can no longer afford to move ambulances from one part of the country, as it has been doing thus far, per call and as needed. Each region must be fully equipped and be ready, within seconds, to go save a life.

Seven people, each one donates $15,000 equals one more ambulance for Israel manufactured in Indiana, USA.

Six months ago, when they decided to join efforts and purchase an ambulance for Magen David Adom, Israel’s equivalent of the Red Cross, none of these good people knew that at the time their ambulance will be dedicated and ready to be shipped a war will be spreading its ugly tentacles between Israel and Hamas.

This past weekend, on the grounds of Yeshiva Gedolah of Los Angeles, one more Ambulance was heading to Israel, donated by a group of philanthropists, more so, people who understand what saving life means.

The ambulance carries the names of familiar faces in the Los Angeles Jewish community who, for many years, have helped Israel in any way possible to grow and thrive. Also newcomers to the family of donors to Israel’s causes. 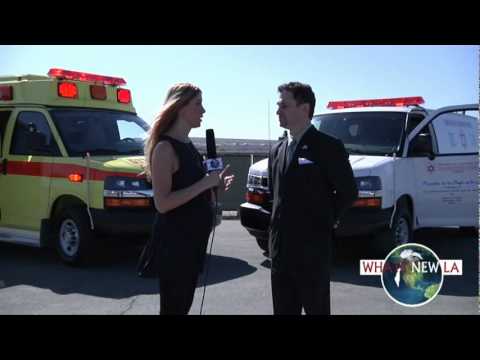 MDA, an Israeli organization, a member of the International Red Cross, is Israel’s equivalent to the 911 emergency hotline.

100% of Israel’s military and 90% of Israel population’s blood bank come from MDA.

Fire stations all over the country are equipped with MDA ambulances.

MDA is among the leaders in stem cell research, and

MDA is often on the frontline when a devastation occurs anywhere in the world, i.e. Haiti earthquake.

For people who worship the gift of life, nothing is more important than saving a life.

Remember, without the state of Israel, we, Jews, will be ashamed of who we are. Because of our support of Israel, we walk tall.

These days when Israel is defending itself, there is no better time than now to do the right mitzvah, donate an ambulance to Israel and save a life.