A few months ago I saw a notice on a street wall from someone selling kidneys, with their phone number on it. The note read “because of financial problems one kidney, group A (38 years old), is for sale, for the sake of god don’t tear this notice I am in a desperate situation.”

After I read this notice, I felt weird, many different thoughts coming to me. I went back and forth in front of the notice several times. My financial situation was not good either, but I knew that if the amount was affordable to me I would have to do something.

I wanted to call. I told myself, it might be fake. Who is willing to sell a sensitive organ for money? Even after death, they generally refuse to do so. But, finally, I decided to call. I had to know what the situation was. I had to know the extent of corruption and misery. He was an employee of a bureau in Tehran. He told me the price.

At that time, I was not able to pay it all, but I said I did not want the kidney, but I could collect and donate half that amount to him. “My financial situation is not good enough and I can only help as much as I can,” I said. That nobleman explained his position and I was ashamed. 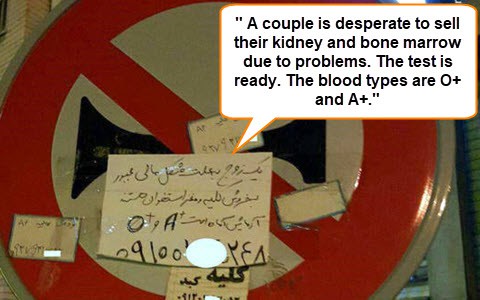 He said, “No! You also seem to be in trouble, I don’t want your money. Let someone with good finances and in need of kidneys solve my misery and trouble!” Yes, it was not fake. It was the voice of someone I could place and see, and only my shortage of money prevented me from helping him. Not someone who doesn’t understand what a kidney is, but someone who knows and understands and is in a desperate situation.

At that time this was a new phenomenon I was seeing in the black market, but since then I have become aware of a massive sale of organs in Iran, especially in front of hospitals. Maybe it had been there before, but I was unaware of it. After all, there are many exceptional things that we have come across these last forty years which are purely a product of the clergy’s rule. One of these products is this sale of organs.

Later I found out that unscrupulous sellers want to deal with the customer directly without intermediaries so that the dealers don’t make a lot of money.

Recently, a video was released on social media telling a group of parasitic clergy:

“We have 1% of the world’s resources and 1% of the population. Why there is so much poverty?! Why there is so much social challenge ?!, the mullahs are flauting justice and generating social discrimination and then we have to come up with products … so let us stop their mismanagement and abuse … I protest against all the cowardice that poverty brings to our nation.”

As a case in point, we were traveling in a yellow Pride taxi cab along with the very crowded Moddarres highway in Tehran. Suddenly, a white high-performance car driven by a young man, with another in the passenger seat, braked heavily in front of us and then roared off. Our yellow cab driver wrenched the steering wheel to avoid running into the car and we all felt our end had come, especially with so many other vehicles on the road around us.

The angry passengers then urged the cab driver to give chase, “Come on, let’s get onto him quickly so he’ll get frightened. This is not the way for him to show off his flash automobile” The cab driver replied, “What would we be doing? Suppose we follow him, at the end a son of one of this rich clergy will come and grab us by the neck and then we will get into trouble and have to give something to get rid of him with a thousand begs and misery…”

The rapid escalation of acts of stubbornness, misogyny, discrimination, bribery, and poverty has not ended. Oppression is also crawling up to the basement of houses and is in the process of being depopulated.

And now, the kidney sale announcements are also banned so that the mullah’s rule must remain clean. Khamenei believes that organ sales are very good. The cornea of the eye, the liver, and everything they wished to sell were fine. He even issues Shariah license for that. All allowed but until the mullah’s, the face will not tarnish.

The supreme leader has no problem with selling organs. He is the Master himself. From the sale of the Caspian Sea to Russia and sea fishes to China, water and mines from the sale of land reserves to religion, and so on. But they must not be disclosed. if something is made public it must be buried with the help of “friends” in Europe.

Young people are tortured and commit ‘suicide,’ but these events are not to be disclosed.

Just as the killing of the Kolbars (a name for the mountain carriers in Kurdistan) and the Baluchis should not be disclosed.

Just as women and men in prison should not say what happened to them.

As the mass killings of political prisoners in 1988 should not be mentioned.

This is the view of the Mullahs, but it is not the view of those who seek freedom like “Resistance unites” who conduct the protests in Iran to bring out everything that is hidden into the light. They know that “the truth will set you free.” The perpetrators of dark deeds will not be able to prevail against their unmasking.

Perviz S. Khazai is a law graduate and former Apprentice diplomat in French Ministry of Foreign Affairs – in IIAP(ENA)Paris, in United Nations in Geneva – In Red Cross International – In Council of Europe in Strasbourg and International Court of Justice in The Hague 1969-1971

He served as the head of the mission and acting ambassador in Norway and Sweden in 1979-1982. He is now representative of NCRI in northern Europe.

COVID-19: Average Death Toll in Iran Is Double That of the World

Iran, Covid-19: “40% of Population Contracted Coronavirus in Some Provinces”

Covid-19: The Second Wave Has Begun, and Deaths Are Skyrocketing Across Iran