According to local media in Iran, labor protests have gained momentum again in different parts of Iran. In the city of Arak, western Iran, employees of the Azarab factory launched a strike at 9 am local time on Wednesday.

Employees staged a march inside the factory’s production site, protesting not receiving their delayed paychecks and the status of stockholders remaining in limbo. The ruling regime in Iran responds to the enraged citizens only with tear gas, beatings, arrests, medieval trials, and long prison terms.

The repressive forces attempted to disperse workers by firing tear gas and air shooting and beating the workers with clubs. They tried to prevent the workers from exiting the site and reaching the streets to expand their protest gathering. State security forces took measures to surround the area where the 1,000 Azarab workers were protesting. 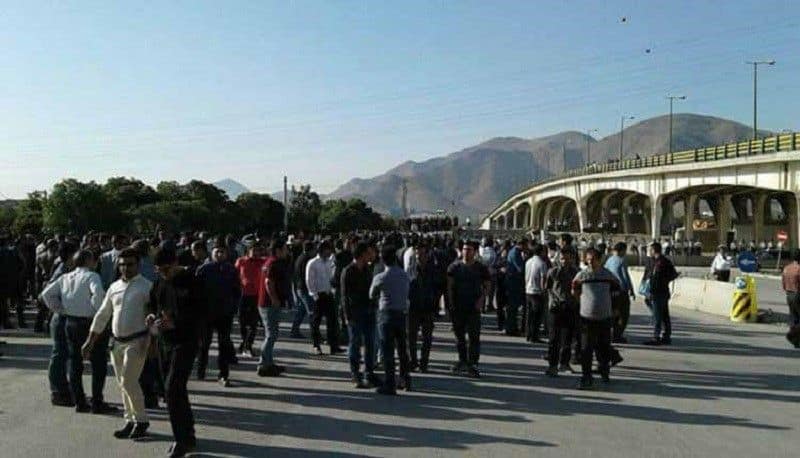 The vicious units of the mullahs’ regime, desperate to prevent the protest from expanding across the city stormed into the Azarab factory parking lot and prevented the personnel from entering their facilities. Nevertheless, despite attempts by security forces to end the demonstrations, workers actively participated in peaceful assemblies, demanding their overdue wages.

Consequently On October 10, 2019, for the fifth consecutive day, the protest gathering of Azarab’s workers continued.

Workers from the two Hepco and Azarab factories in Arak have previously gathered during the past years protesting their unpaid salaries. In recent years, dozens of workers were sentenced to prison for holding trade union gatherings.

Rouhani’s administration has so far ignored these demands and still insists on shrinking the government’s workforce by promoting the privatization of public plants and factories. 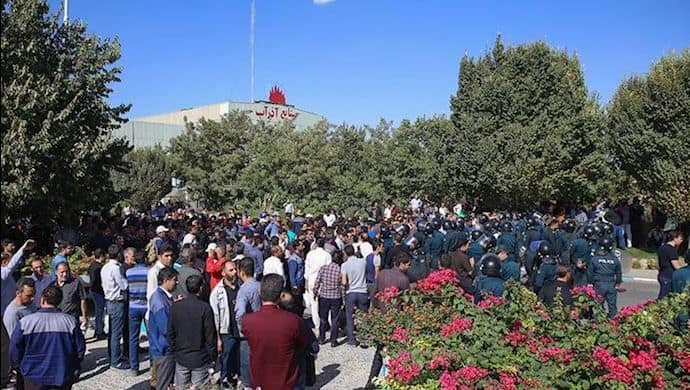 Azarab and Hepco are privatized factories manufacturing heavy equipment, including road construction, oil, gas, and petrochemical industries. Each has the capacity to employ more than 3,000 workers but has only 1,000 workers. 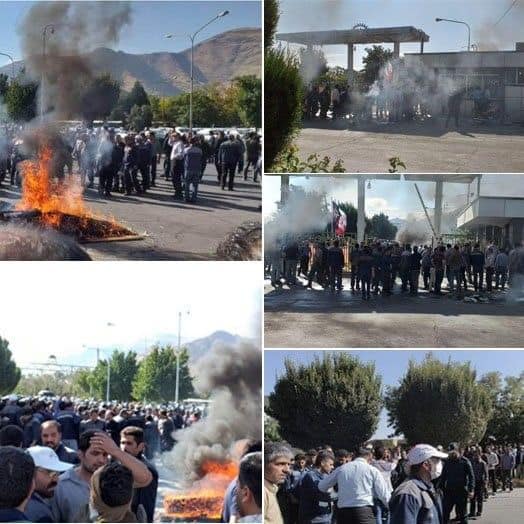 Problems are created when private owners fail to properly downsize an enterprise. Instead of legally paying off unneeded workers and reducing the workforce, the privatized company, without government subsidies, is unable to pay people regularly.

Moreover, the government has no money because Iran in recent years has invested billions in propping up its allies in Lebanon, the Gaza Strip, Yemen, and Iraq. Much of the funding will go in the form of arms and equipment provided by IRGC.

Iran extends invaluable support to its allies through the services of its officers as military advisers and by setting up Shi’ite militias that it trains and deploys across the region. That is why one of the many slogans being heard at the protests is “No Gaza, No Lebanon, No Syria, My life for Iran!”

Labor protests across Iran appear to be having no effect on the mullahs’ malign actions. They continue to abuse the people, spending what little money they have on interference in the affairs of other countries throughout the region.

#Iran: Inspiring Message On The 105th Day of #IranRevolution

Iran’s Khamenei vs Iran protests: Implosion from within?