Broadstrokes Productions brought the barely explored epic sub plot “The Greater Good” to our screens in a way we’d never seen before and now they are back with another compelling yarn from the Harry Potter universe.

It is one of the most talked about friendship groups in fantasy, spawning thousands of imitation Twitter and Facebook accounts, nicknames, merchandise, blog topics and a ton of fan fiction.

Now Broadstrokes Productions is waving their film-making wands and lifting the tale of R.J. Lupin and friends from the pages of JK Rowlings’ fantasy epic and portraying them on the silver screen!

The Purveyors of Aids to Magical Mischief Makers are proud to present THE MARAUDER’S MAP.

If you do not know what story I’m talking about by now, simply look at the video below and let excitement wash over you! 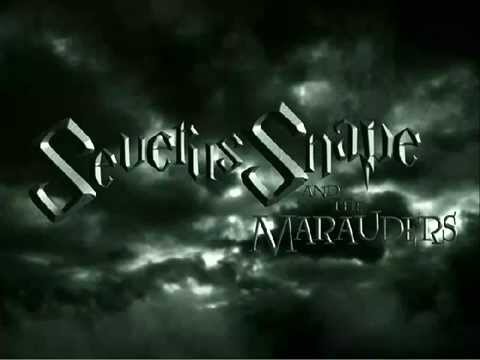 1. What attracted you to this particular story in the Harry Potter Universe over the other ones that could have been expanded upon?

The Marauders are so interesting to me because they represent the mystery of the previous generation of students. We want to see their adventures. They have a lot of similarities to Harry, Ron, Hermione and Neville but they have their own differences as well. We want to get to know them better, and especially (at least for me) see James’ relationship to Snape.

2. Nearly half the characters in this story are Animagi- if you could turn into any creature what would it be and why?

Oh goodness well my favorite animal is a Humpback whale and that would be impractical unless I wanted to hang out with the giant squid. So I think I’d be a cat. Slinky, enjoys their solitude, great night vision.

3. Do you have a favourite out of the marauders and why them?

My favorite marauder is Lupin. To me he is the luckiest guy of the group. His three friends risked expulsion and arrest to help him with his affliction. Doesn’t get any more loyal than that. And despite his tendencies once a month, he is the smartest and most level-headed of the four.

4. You’re stuck in a duel against five Death Eaters what 4 wizards and witches do you want with you?

I’d take Dumbledore because the duel would be over in seconds. Snape because in my opinion after Dumbledore, Voldemort and Grindelwald, he is the most skilled wizard there is. Mcgonagall cause she is right behind Snape (I loved their duel in The Deathly Hallows. The book.) and Harry if he were in his prime.

5. How can fans support and get this made?

Fans can donate and spread the word across all outlets! Facebook, Tumblr, twitter, their friends, family, everywhere you can! We did our best to make some fun perks worth having so that should provide some extra incentive to donate. We can’t do it without them!

6. What sets this rendition of this story apart from potential similar renditions out there?

This story is different because we get to see the pivotal moment of him joining the death eaters, and we see the last time he was ever confronted by James and the Marauders. We see a major change in James’ character and we see how Lily influences the decisions Snape makes for his future in a tangible way. Not just because of his love for her.

7. How long will filming take?

Filming will take 6 days. Two days in a pub, four nights in a forest. We are very much looking forward to the forest shoot

8. Will we be able to see it in cinemas perhaps?

Well we will release it on Youtube, BUT if we hit one of our extended goals, we will screen it in a special state of the art theater for all to see! If you can make it to LA, that is.

Editor’s Note: Be sure to check out Kingsley’s website for all his latest work