As every year, renowned dignitaries from the US, Canada, Europe and the middle east are to participate in major Iranian convention in Paris on July 1, 2017.

The Free Iran convention is especially important, as in the past months, Iran has become a source of escalating tension with the United States and the countries of the Middle East region. In the recent Riyadh Summit, participants underscored the need for an international alliance to counter Iran’s meddling in the region. Of special note were its ballistic missile program and State sponsorship of terrorism.

In the Free Iran convention, in addition to tens of thousands of Iranians from across the world, hundreds of politicians and parliamentarians from dozens of countries representing a wide range of political perspectives will participate, and many will deliver speeches.

Last year, more than 100,000 people took part in the Free Iran convention, and the event garnered the support of US politicians from both sides of the aisle. 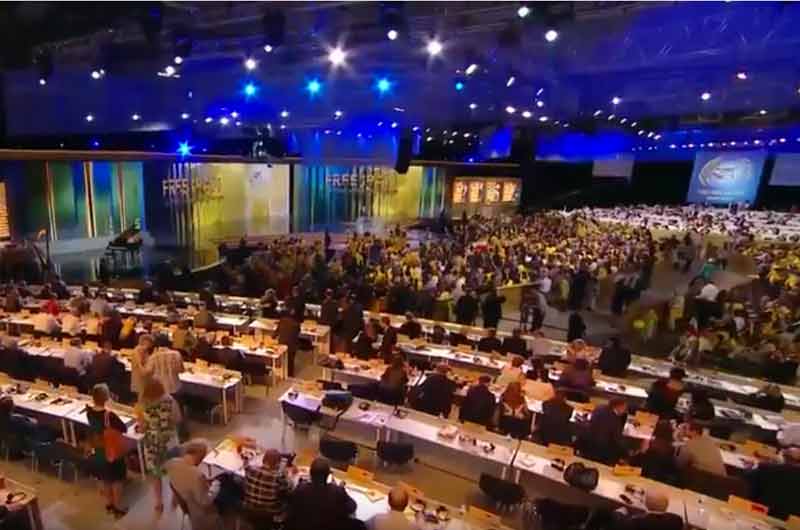 In remarks to this convention, dignitaries and MPs from Canada send the message of solidarity.

In her message to this convention the Honorable. Alexandra Mendes, (see video below) Member of federal Parliament in Ottawa said: “I congratulate the National Council of Resistance of Iran and its President-elect Madam Rajavi for her ten point plan that will bring genuine change to Iran and hopefully Iran can once again find its place in the international arena. As a woman, it is heartening that gender equality and separation of state and religion is a cornerstone of this plan, setting an example for all countries in the region. This year, as we celebrate Canada’s 150th anniversary of Confederation, we reinforce the values that are so dear to us all. Your quest for the same values in your July 1st gathering in Paris is an aspiration I support wholeheartedly. May you have the best of gathering.”

The Honorable. Wayne Easter, Member of Parliament, former Solicitor General of Canada Said (https://youtu.be/LG3K2Qalmec ): “May I pass my respect to the Iranian people as you strive to attain democracy in your homeland. One thing that we are so fortunate to have in Canada is equality of opportunity, the separation between religion and state, gender equality, and those are ideas I know many Iranian people strive for as well. So I just want to offer my support as you work with effort every day to try to achieve those goals. As a global community, we have a responsibility to ensure that freedom is attained for all people around the world. It is a global responsibility and an opportunity for others around the world to support you in your cause. And I want to show my respect in that regard. In Canada this year we celebrate Canada 150. It is 150 years since Canada came in to be as a nation. And that’s what I hope others around the world to achieve as well although you might be much older in terms of your country, in terms of time and decades, we believe what we have gained. Many countries, many people, want to achieve as well. Might I say as well to those that are gathered in Paris, we are with you in spirit and we wish you all the best in your struggle to attain democracy and freedom in your country.”

The Honorable Judy A. Sgro Member of Parliament, and former Minister of Immigration Said ( https://youtu.be/NUI1Wc9yU98 ): “As we celebrate the 150th anniversary of Canada’s confederation, I recall our founding principles of peace, order and good governance in a pluralist system. Our democratic institutions would not be possible without the assurance of fundamental human rights for all Canadians. So I am encouraged by the National Council of Resistance under Madam Rajavi and future Iran’s commitment to fundamental human rights. Mrs. Rajavi’s 10-point plan highlights this commitment and I believe it will bring around genuine change for women’s rights, religious rights, and voting rights. Freedom of expression particularly universal suffrage is one of the most critical rights in a democracy. The infringements of this right on any demographic, whether by gender or by nationality, is a violation of the spirit of democracy. We will not sit idly by as women, and as individuals of different nationalities while they are deprived of their rights in Iran. I stand in solidarity with you and the people of Iran and we will continue our work to ensure an equal, just and free Iran.”