War stories from Karabakh that amount to hope, peace and prosperity.

The First Karabakh War took place from February 1988 to May 1994 in and around Azerbaijan’s Nagorno-Karabakh enclave between Armenia – backed by Russia – and Azerbaijan. The outcome of the war was that Armenia invaded and occupied 20 percent of Azerbaijan’s sovereign territory and forcibly displaced 800,000 Azerbaijani civilians who lived in that region. 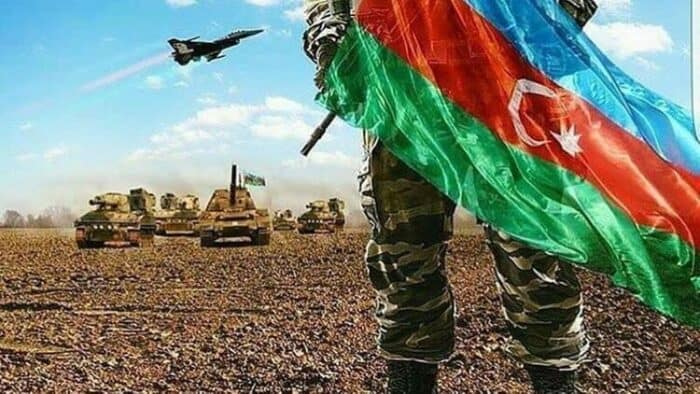 Despite international condemnation, including the UN Security Council four resolution against Armenia, the invaded areas remained under illegal Armenian occupation for three decades. That occupation has been especially difficult on almost one million forcibly displaced Azerbaijanis.

Then, on the morning of September 27, 2020, Armenia’s Armed Forces launched a large-scale attack against Azerbaijan. In order to halt the Armenian army’s attack and ensure the security of Azerbaijan’s civilian population, the Azerbaijani army command decided to launch a rapid counter-offensive along the entire front. The clashes escalated rapidly into a 44-day-long Second Karabakh War that took place at the height of the Coronavirus pandemic.

The war ended on November 10, 2020, with a high number of casualties and 1,245 soldiers wounded. Among the wounded was Arif Hajiyev, wounded in the Yukhari Abdurrahmanli village in the direction of the city of Fuzuli.

Armenia’s illegal occupation of 20% of Azerbaijan’s legal territory has been a heavy burden on the country, and the immense cruelty of that war has been deeply immersed in the memory of the Azerbaijani nation.

Those terrible circumstances came to a halt due to Azerbaijan’s victorious outcome in the Second Karabakh War.

To learn more about Azerbaijan’s victory, I decided to meet two wounded veterans of this war so I could tell their story to the world.

While recently in Baku, I had the honor to interview 24-year-old Arif Hajiyev, who was born in 1997, years after the First Karabakh War ended. His injury story, which he told me while we sat at a quaint café in Baku’s old city, turned out to be rather emotional for me.

When the war began, Ilham Aliyev, the President of Azerbaijan, called his countrymen to join in the battle for the safety and security of their homeland. Every man who could fight enlisted.

Arif served in the infantry for two years and while in reserve service he studied and then worked as a graphic designer. In September 2020 Arif joined his infantry reserve unit to fight in Karabakh to defend his homeland. In October 2020 an Armenian mortar shell hit his unit. Seven of the fighters died from the explosion, among them Arif’s best friend Vahid. Arif was severely injured; his left arm was badly broken, right eye was torn open and his face suffered a deep cut. With the explosion Arif was buried alive and was evacuated by car two hours after he was injured.

While all other wounded soldiers who suffered eye injury received a prosthetic eye from the Israeli team of doctors, Arif was the only one to have received a donor’s cornea.

Doctor Falik explains the two hour operation he performed on Arif’s eye: “Arif was hit by the shell, he fell, lost consciousness and one of his eyes was opened apart. The iris got incarcerated inside the wound. In the military hospital they sticked his eye, the cornea, the sclera and sent him to Zarifa Aliyeva Ophthalmology Hospital. Arif suffered a traumatic cataract whereby his injured eye could see only light.” Dr. Falik performed a triple procedure on Arif’s eye. He opened Arif’s eye cornea and removed it; released the incarcerated iris; performed a traumatic cataract, inserted an IOL (intraocular lens) in the sulcus below the iris plane. Then, the operating team ordered a cornea from Israel and performed a cornea transplantation. Immediately after the operation Arif was able to see 6.45 which improved to 6.30. All that means that Arif could see the ophthalmologist’s wall chart and as time goes by, his eyesight may even improve.

After a year in Azerbaijan’s hospital and two months in a hospital in Turkey, Arif began his extended recovery process. So far Arif, whose grandfather and father were, in 1993, forcibly displaced by Armenia from the city of Fuzuli, now liberated from Armenian occupation, has gone through seven operations, with monthly follow up and more operations to come.

“What is the government’s role in your recovery,” I was curious to know and asked.

Arif: “Our government is the best. Not only did I receive the best medical attention possible for a monthly check up and the necessary operations, but I also received a house, a car and financial assistance provided by the YASHAT Foundation.” YASHAT supports the families of wounded and fallen soldiers of the Second Karabakh War, established on December 8, 2020, by the order of the President of the Republic of Azerbaijan.

“What was your parents’ reaction to your injury?” I asked.

Arif: “First, my parents were sad. However, they were happy I was alive and more so proud that I fought for our fatherland.”

And my next question was, “If there is another war, would you fight again?”

Arif is an Azerbaijani hero. His reply, “of course I will fight for my fatherland again.”

Arif emphasized that he does not mind living with his injuries. His recovery requires adjusting to the use of his injured arm in which only 2 fingers are intact and function well. But this Azerbaijani hero dismisses the difficulties. He is using a mini keyboard and is back at graphic design work.

I met Vasif, a well-dressed and shy person, at his Media Development Agency employment offices. Though with a slight limp, from his impressive stature one cannot tell that one of Vasif’s legs has gone through massive trauma.

Vasif’s Second Karabakh War in fact began in a battle on April 1st, 2016, in which Azerbaijan regained 20 km of strategic positions in its territory that was illegally occupied by Armenia.

This battle prepared Vasif for what was to come four years later.

On September 27, 2020, Vasif was first called to the Murovdağ line of contact, the highest mountain range in the Lesser Caucasus. His unit’s task was to liberate a strategically important nearby area. The Armenians were firing at them with heavy artillery. He was not scared of the war ahead of him, only concerned that his unit would not meet their task to liberate the targeted area they were assigned to liberate.

The fighting was fierce. Vasif was wounded in his leg and could not be evacuated due to the heavy exchange of fire. But his unit were winning and eventually his soldiers got hold of an Armenian vehicle left behind and evacuated him to Fuzuli hospital and a day later he was transferred to a Baku hospital.

Vasif lost a lot of blood and needed seven operations to save his leg. His foot on that leg is missing four toes, and the nerves and veins under the knee are dysfunctional and thus he has no sensation in the wounded area.

Vasif, now married with two girls who were born after the war, says he had been prepared for the war since the age of 14 when he entered the military academy, therefore “was willing to fight from a young age.”

Though he was provided with a job, pension, medical insurance to cover his full recovery, and is waiting to receive his due house and a car, in reality, Vasif would have loved to have continued his military service, but his injury will not permit his return to active service.

When I asked Vasif what his message was to his countrymen, he said: “I wish peace for the next generation. However, be ready to defend your country.”

When you walk the streets of Baku or liberated Shusha you sense that no soul died in vain to liberate Azerbaijan’s sovereign territory from Armenian occupation.