We are witnessing a serious wave of strong remarks from senior US politicians on Iran’s nuclear weapons drive.

New Jersey Governor Chris Christie in a speech in New York criticized the Obama administration’s policy on nuclear talks with Iran. “The US president is attempting to convince the American people that Iran has had a change in attitude, but I have seen no such signs in Iran’s behavior,” he said.

“There is no hope for a change in Iran’s behavior and one cannot consider Iran as a real broker in the negotiations,” Christie added.

Senator Ted Cruz also referred to the threat of Iran’s nuclear weapons program and said the US president must clearly declare to the world that either Iran stops these measures or the US will stop them.

In an interview with Fox News on Iran’s nuclear program former New York governor George Pataki reminded that Tehran is the number one state sponsor of terrorism across the globe. The nuclear talks must be rejected unless we can become completely certain that this agreement will not place Iran in the path of obtaining nuclear weapons, he added.

Representative Robert Hurt has said there is little hope of obtaining a serious agreement in the nuclear talks with Iran, adding he is not convinced Iran has a good will in these negotiations and they have maintained their nuclear ambitions. 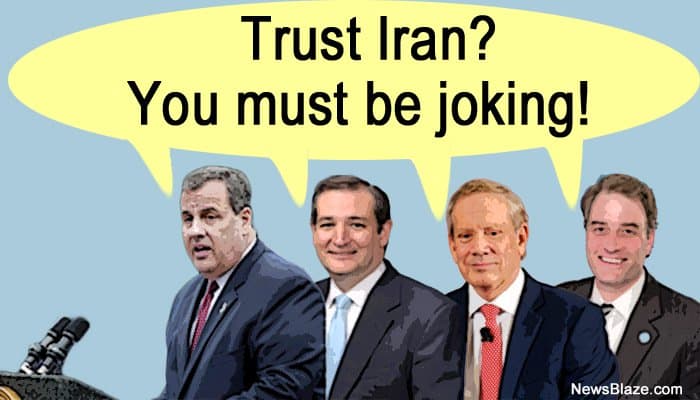 North Korea and Iran are secretly building ties to equip themselves with ballistic missiles and nuclear warheads, Reuters reported Thursday, citing an exiled Iranian opposition group. A delegation of nuclear arms experts from North Korea visited a military site near Tehran in April while Iran was in talks with world powers over its nuclear program, the group has claimed.

The National Council of Resistance of Iran (NCRI), a Paris-based Iranian dissident group, reportedly said that a seven-person team of the North Korean Defense Ministry was in Iran in the last week of April in what was the third visit by North Korean officials in 2015, while a nine-person delegation from Pyongyang is expected to visit the country again in June, NCRI said, citing sources inside Iran.

These revelations also indicated that Mohsen Fakhrizadeh, Iran’s top man in its pursuit of nuclear weapons, had gone to Pyongyang back in February 2013 during North Korea’s third nuclear weapons test.

This press conference was covered by numerous Western and Arab media outlets.