October 10th 2015, on the occasion of World Day Against the Death Penalty, a conference sponsored by the Committee Defending Human Rights in Iran was held in Paris entitled, “Iran, Human Rights, Stop Executions.”

Scores of European as well as international personalities and dignitaries, human rights and women’s rights advocates attended the meeting. Iranian Resistance’s President-elect Maryam Rajavi who was the keynote speaker declared in an international conference: “Our plan is an Iran without the death penalty and obliterating the mullahs’ religious decrees.”

World Silent Over Torture in Iran

Mrs. Rajavi emphasized: “Trture and executions must be stopped; this is the demand of all of Iranian people. To the governments of the West we say: Set aside your silence and inaction over the executions and atrocities of the mullahs’ religious fascism and instead, respect the Iranian people’s resistance for freedom. If Western governments had stood up to the abuse of human rights in Iran, the mullahs could never expand their barbarity to Syria and Iraq.”

Mrs. Rajavi warned: “Any form of relations and engagement with the Iranian regime must be made contingent upon termination of executions in Iran. As long as this sinister trend is in progress, it is not justifiable to shake hands with leaders of a regime that has carried out 120,000 political executions.” 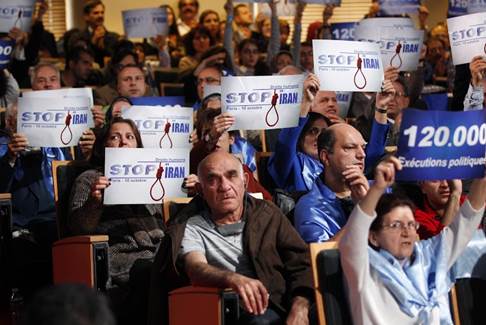 Criticizing continued appeasement of the Iranian regime, Mrs. Rajavi added, “Indeed, why does the world remain silent when Iranian political prisoners are tormented to death or hanged? Why is the world silent when juveniles are executed in Iran? Today, a large number of our defenseless countrymen are secretly executed in prisons across the country. Shame on those who turn a blind eye to so much abuse of human rights in Iran!”

Mrs. Rajavi declared: “Our plan for the future is an Iran without the death penalty, obliterating the mullahs’ religious decrees and establishing an independent judiciary, defending democratic values, freedom, equality and sanctity of every citizen’s private life; no one will be arrested arbitrarily and torture is banned.”

Former United Nations human rights chief in Iraq, Dr Tahar Boumedra addressed the audience: “In Iran the death penalty is left to the determination of judges who have limited knowledge. – The reality about the fundamentalist regime in Iran is that it has deprived the civil society which aspires for freedom and justice to reach their hopes and their standards. The clerical leadership poses a serious challenge to the establishment of democracy in Iran.” He added: “The NCRI president-elect’s 10-point plan opens a gateway to democracy. It calls for abolition of the death penalty, gender equality, and the rule of law and justice as the foundation of the state.”

Guest speaker Rama Yade, former French Minister for Human Rights, said the flaw in the July 14 nuclear deal between the major world powers and the Iranian regime is that it ignores the human rights abuses by the regime. Turning a blind eye to the human rights violations in Iran only encourages the regime to commit more such abuses, she said.

In another moving development in the conference, Mr. Farzad Madadzadeh, a political prisoner who has been recently released after five years of imprisonment in the clerical regime’s torture chambers, and Pariya Kohandel, whose father is a political prisoner in the Gohardasht Prison of Karaj, both supporters of the PMOI in Iran who have recently left the country, spoke on the abysmal state of the Iranian people’s lives and the horrible prison conditions.

“Greetings to my dear sister Maryam and all you dear friends, greetings to the fighters in Liberty and all my compatriots that hear my voice.

My greetings have passed through the barbed wires of Gohardasht prison, the thick walls of Evin prison, and the storehouses of Qarchak; The prisons that during my childhood I used to run in their dusty visitors’ halls …

My name is Paria Kohandel and I left Iran only a few months ago. My father is political prisoner Saleh Kohandel who is imprisoned in the dreaded Gohardasht prison. On April 19, 2011, my dear uncle Akbar and my beloved aunt Mahdieh were martyred in an attack by Maliki’s paid hands.

A few months ago, exactly 20 days before the entrance test for universities, I left Iran –

However, what I had left behind in Iran would not let go of me. I found myself in a dilemma: should I follow my dreams or should I choose the path of resistance to bring into being the dreams of all the children that are captive in Iran, such as the dreams of my dear friend and other girls like her?

I understood that I cannot just think about my own dreams. My colorful dreams are just a small part of my life – My big dream is to see the happiness of children so that they never have to pass through the tunnel of Gohardasht….

Now that I am among all of you who work for freedom, I can hear the echo of my father’s call who said: Paria! I have drunk the pure wine that you have not even smelled!

In a thought-provoking related experience, the conference featured an exhibition in memory of 120,000 political prisoners executed on the orders of the religious dictatorship’s leaders in Iran, including the 30,000 political prisoners massacred in 1988. Also on display were sculptures and symbolic statues made by the Iranian Resistance’s sculptors. The conference ended early evening Paris time.