With participation of over 500 prominent political personalities, parliamentarians and jurists from 40 countries and five continents call for immediate measure to guarantee basic rights of Iranian dissidents in Ashraf and Liberty (Iraq)

This afternoon, Saturday, June 23, the largest gathering of exiled Iranians with the participation of hundreds of political personalities, legislators and jurists with different political tendencies from 40 countries around the world, called for taking a firm stance vis-a-vis Iran and recognition of the National Council of Resistance of Iran by the world community.

Through its strongest protest against turning Camp Liberty into a prison, the gathering urged the United Nations, the U.S. , and the European Union to prevent a humanitarian catastrophe in Ashraf and Liberty that the Government of Iraq is preparing for at the behest of the mullahs’ regime, to guarantee the rights of residents as ‘asylum-seekers of concern’ under the Fourth Geneva Convention, and to force Iraq to stop its cruel restrictions against the residents quickly. They underscored that the six-item demands of the residents need to be realized to resume the transfer of the residents to Liberty. 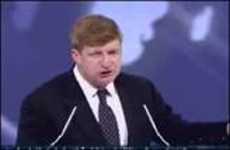 The participants in the gathering asked Secretary Clinton that by immediately implementing the court’s ruling she stops the unjust designation against the Iranian Resistance; a devastating policy that has been the main factor for Iranian regime’s survival for the past 15 years and so far has been used to justify two massacres in Ashraf, execution and torture of lots of members and sympathizers of the PMOI and the Iranian Resistance inside Iran and imposing brutal limitations against Iranians in the United States, and yet the Iranian regime and the Iraqi government continue to use it as a lever for repression of the residents of Ashraf and Liberty.

The keynote speaker of the program was Mrs. Maryam Rajavi, President-elect of the Iranian resistance. She described the writ of the Federal Court of Appeal in Washington against the illegal tag on the PMOI as a great historical achievement in the struggle of the Iranian people’s resistance against the mullahs’ regime and said: “Through this designation, they sought to disavow the right of the Iranian nation to the regime change; but the resistance proved that right. This policy, which is used to preserve the mullahs’ regime, and has been a big obstacle in the path of Iranian people’s freedom, and has had no use other than preparing the ground for massacre of Ashraf residents, has to be eradicated.” She added, “I hope Mrs. Clinton would personally put an end to this illegal designation.” 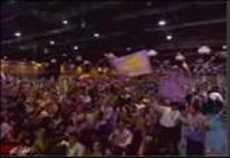 With regard to developments and the situation of residents of Ashraf and Liberty, Mrs. Rajavi said, “In recent months, Ashraf residents accepted to relocate from Ashraf in the context of an international solution. To let this solution proceed, they relinquished many of their basic rights. Nevertheless, what was supposed to be a voluntary relocation, turned to be forcible one due to Iranian regime’s conspiracies, repeated violation of commitments by the GOI, and the inaction of the UN and the U.S. It was an imposed relocation whose memorandum of understanding lacks the requests made by Ashraf residents; even though the specified items in the said MOU has not been honored. This plan is in practice as sending Ashraf residents to a prison. The Temporary Transit Location (TTL) plan has failed completely, particularly due to inhumane approach of the GOI. Ashraf residents have announced that they won’t go to Liberty anymore so long as their most basic rights continue to be trampled.

The 6-item demands of the residents, which has been sent to the UN Secretary General and the U.S. government are very simple: Instead of turning Liberty into a prison; recognize it as a refugee camp; provide water, electricity and human needs for it; do not allow the Iranian regime that seeks to annihilate this movement to intervene in its affairs; and search Ashraf which you claim it has not been completely disarmed yet.

Contrary to its official pledge on February 16, the U.S. has unfortunately violated its commitment. Instead, it is insisting that Ashraf residents move to a prison just for a mere promise, and if they reject going to prison, the illegal designation will continue and they will be accused of cessation of negotiations and not cooperating. Hereby, the oppressed is replaced by the oppressor once again.” Mrs Rajavi emphasized that the responsibility for the relocation process is that of the Iraqi government and asked the international community to have the Iraqi government fulfill its obligations. She further asked that the European countries get actively involved in the relocation process of the Liberty residents to third countries.

Mrs. Rajavi called the failed negotiations between the p5+1 and the mullahs’ regime as the failure of Mr. Obama’s engagement policy for four years and said: “Those who present the nuclear threat with little importance are betraying their own people and the whole world. Those who depict the world as having no solution in the face of mullahs’ nuclear threat are guilty. It is possible to put an end to nuclear threat of this regime and its sole solution is regime change which is the responsibility of the Iranian people and Resistance whose desire is a free of suppression and non-nuclear Iran and an Iran without Velayat-e faqih (supreme religious leader).”

Addressing brave Iranian youth, Mrs. Rajavi said in the end, “The mullahs have created a thick barrier of suppression before you which has no precedence in the current world. The goal of ceaseless executions is to intimidate you. The regime wants to fan this dissuading notion that paying the price for freedom is futile. But you enjoy the backing of struggle for freedom for one century, and from the point of struggle background and the capacity for change, you are among the richest nations in the world. You are also relying on an organized movement; a movement based on the cause of freedom whose goal has never been and is not to achieve the power regardless of its price. Rather, it struggles to guarantee freedom, democracy and equality regardless of its price.”

In the end she called on the Iranian people, especially the women, the youth and the workers and toilers, who are faced with escalating pressures due to high prices, privations and fundamentalist pressures, to rise against religious autocracy ruling Iran.

On behalf of the participating delegations from 40 countries, dozens of prominent figures delivered their speeches in this great gathering. The program was presided over by Anne-Marie Lizin, former President of Belgian Senate; Patrick Kennedy, Member of US House of Representatives (1995-2011); David Amess, Member of British Parliament; Lars Rise, the President of the Norwegian committee of Friends of a Free Iran; and Jean-Pierre Bequet, member of the Valdoise Provincial Council and mayor of Auvers-sur-Oise.

From France: Philippe Douste-Blazy, Former French Foreign Minister and to the UN Secretary General; Bruno Le Roux, chair of the socialist group in the French Assembly; Senateur Jean-Pierre Michel, co-president of the French Committee for a Democratic Iran; Jean-Pierre Brard former member of the French National Assembly; Dominique Lefebvre, Mayor of Cergy and member of National Assembly; Aude de Thuin, Founder and president of the Women’s Forum for the Economy and Society; Cynthia Fleury, professor of political philosophy from American University in Paris; and Yves Bonnet former director of the French DST.

From UK: Brian Binley, MP from the House of Commons;

From Italy and San Marino: Emma Bonino,Vice-President of Italian Senate, former European Commissioner and former Italian Minister of International Trade; Carlo Ciccioli, co-Chair of the Italian Committee of Parliamentarians and citizens for a free Iran;

From Romania: Raymond Luca, a senior member of the foreign affairs committee;