These warrants do not have any date, number, or the judge’s name, and have been fabricated by the Iraqi Intelligence on the order of the Iranian regime. Many of these warrants are issued for people who had long been deceased or live in Europe.

The Iranian resistance has obtained from within the Iranian regime a copy of forged and illegal arrest warrants that have been issued by the Iraqi government against Ashraf residents.

These warrants, fabricated by the Iraqi Mukhaberat (Intelligence) and carrying the signature of “Iraqi Supreme Criminal Court,” have been issued for people claimed to be in Camp Ashraf who are members of the People’s Mojahedin Organization of Iran (PMOI). 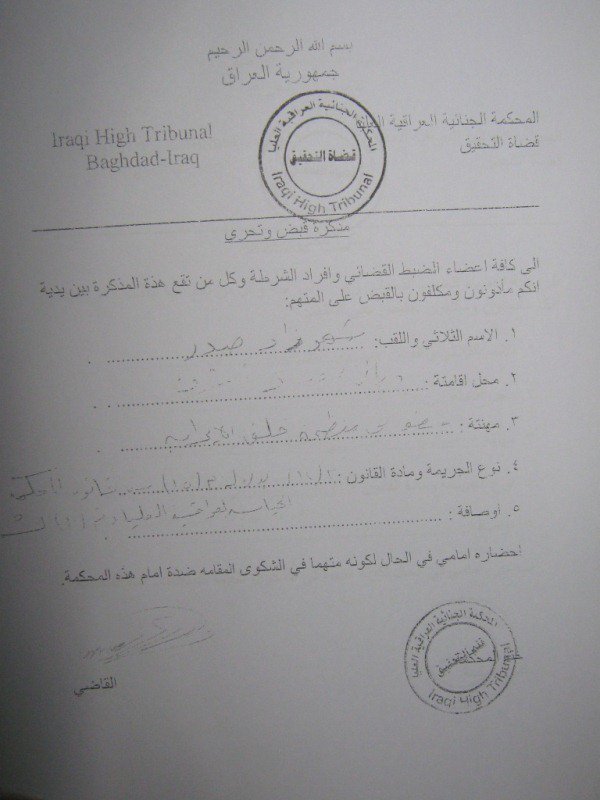 Eighty such warrants were sent from the Interior Ministry to Diyala Police Chief on April 3, 2011, five days before the massacre of April 8th.

Iraqi Prime Minister Nouri al-Maliki recently said in interviews with the Iranian media: “We now have 121 arrest warrants for members who are in Ashraf City who have committed crimes” (al-Alam TV, January 16, 2012). These fake and invalid warrants are futile efforts of the mullahs’ regime and its puppet Prime Minister in Iraq to justify crimes against humanity in Ashraf and massacres of July 28 and 29, 2009 and April 8, 2011, and preparing the ground for further crimes. Bringing this up again at this time is to fail the peaceful solution for Ashraf. 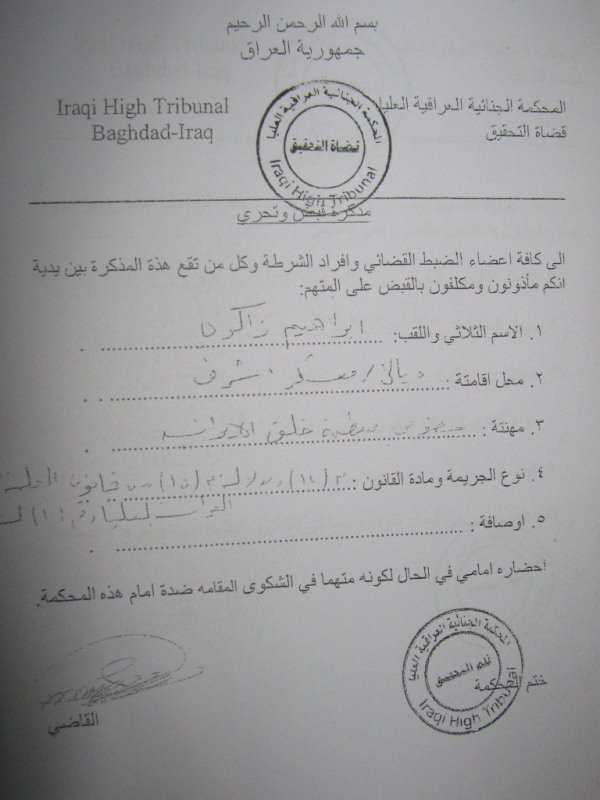 These warrants are so clumsy that none of them even have the date and number and identity of the signing; only an anonymous signature claiming to be the judge appears on these warrants. In what dictatorship except in Iran, arrest warrants have no date, number and the Judge’s name?

Thirty eight other arrest warrants had been issued on July 20, 2009, eight days prior to the massacre of July 28 and 29th that clearly was preparing the ground for that massacre. 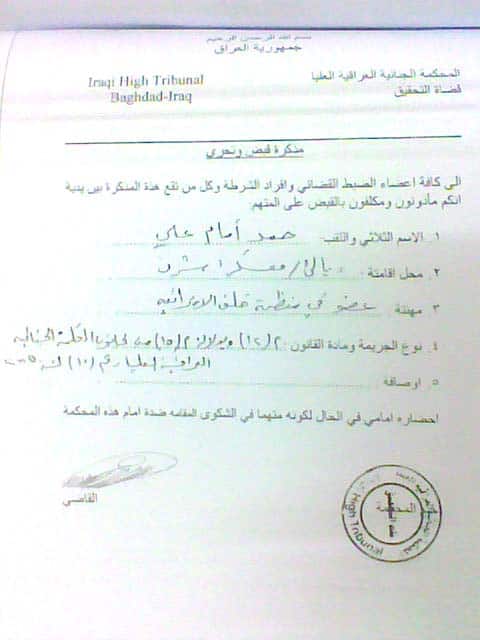 Many of the names in these warrants are duplicates and some have never been in PMOI, or Ashraf or any other place. Some of the warrants were issued for people who no longer are alive. Mr. Ebrahim Zakeri, chairman of the Security and anti-terrorism Commission of the National Council of Resistance of Iran died in Paris on March 22, 2003. Mr. Sohrab Hamidi, Samad Emam Ali and Mohammad Ali Mousavi are among those who were martyred many years ago. (The arrest warrants are attached)

A number of these warrants are for people who have been living in Europe for years and are not in Ashraf or Iraq. For instance we can point out to Ms. Shahrzad Sadr, Farah Haj Yousef and Mr. Mehdi Abrishamchi, Mohammad Mohadessin and Ahmad Shokrani. 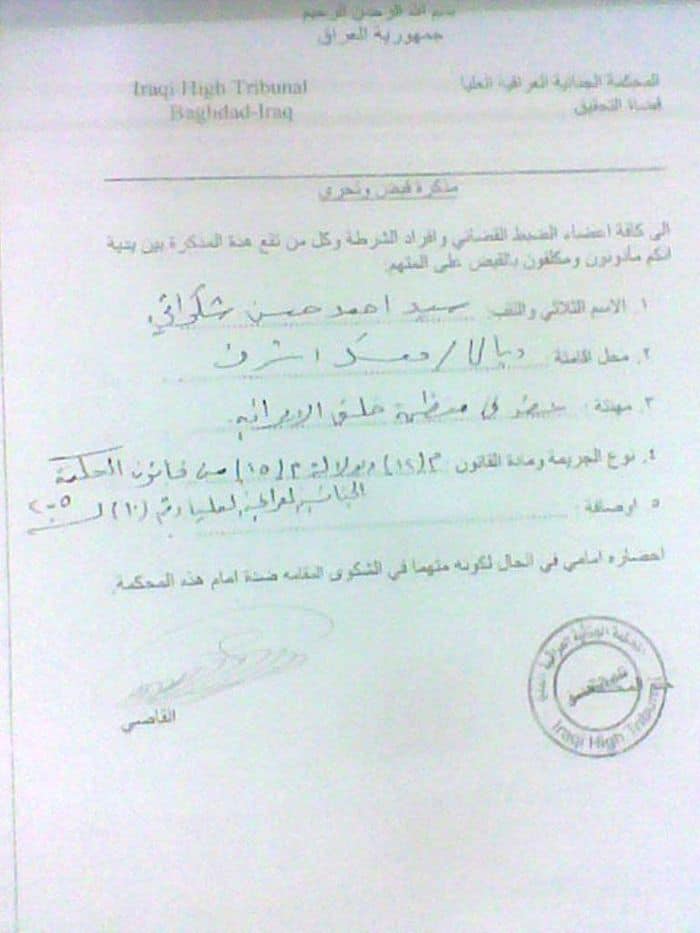 Revolutionary guard, Danai Far, the Iranian regime’s Ambassador in Baghdad, in an interview with Assabah al-Jadid on December 5, 2010 said: “Recently the Iraqi courts have issued arrest warrants for 38 members of this organization but this has not been enforced so far. We, as an Embassy, have delivered some documents one more time to Iraqi authorities and Iraqi Foreign Affairs that prove the crimes that this organization has committed.” A month and half later, he announced the number of future warrants to be issued and said: “We have officially said a 38-member group and a 42-member group of them are guilty” (Hamshahri state-owned newspaper, January 18, 2011)

On March 28, Munir Haddad, a responsible with the Iraqi Supreme had said in an interview with Kuwait’s Annahar paper: “The prosecutor general, Jafar AlMousavi and I, along with other judiciary officials were in Tehran. We were told that People’s Mojahedin Organization had participated in Kuwait war and they gave us some documents.”

The mullahs’ regime has prepared a series of confessions by the Intelligence agents inside Iran under the guise of former PMOI members as a supporting document for these forged warrants. The texts of 11 fabricated testimonies have been obtained by the Iranian resistance.

Based on the above, the Iranian resistance urges the US, EU and the UN to condemn these fabrications and not to allow the Iraqi judiciary to become a tool of suppression and massacre of Iranian refugees, and the Iranian regime and Iraqi government bring to failure the peaceful solution for Ashraf. The Iranian resistance also calls upon international human rights organizations, independent jurists unions across the world and noble Iraqi lawyers and judges to act urgently against the use of Iraqi Judiciary against political refugees and protected persons under the Fourth Geneva Convention in Ashraf.