This morning, September 7, over twenty hirelings of Iranian regime’s Intelligence Ministry (MOIS) and the terrorist Quds Force (QF) were transferred to Camp Liberty under the well-known pretext of “residents’ families.”

These people were transferred in a minibus by the regime’s embassy in Baghdad and the Governmental Committee tasked to suppress members of the People’s Mojahedin Organization of Iran (PMOI/MEK) in Camp Liberty. That suppressive group works under Iraq’s National Security Advisor Faleh Fayyad.

Colonel Sadeq Mohammed Kadhim, Major Ahmed Khozair and Captain Haidar Azab from the Governmental Committee were able to get these hirelings past several checkpoints along the way and brought them to Liberty’s police station. As soon as they got to the police station, they started chanting threatening and provoking slogans. 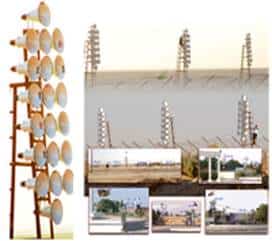 These agents who were brought to Baghdad, Iraq by MOIS and the Iranian regime’s embassy could not have passed the several checkpoints on their way to Liberty without prior coordination and active participation of Iraq’s security institutions. This move clearly imperils the security of PMOI members in Camp Liberty and betrays machinations by the Iranian regime and its proxies in Iraq for the psychological torture of PMOI members and paves the way for future massacres.

It is interesting that some of the hirelings dispatched to Camp Liberty claim they are relatives of those who have already been transferred a long time ago from Liberty to outside of Iraq. They were transferred under UNHCR supervision with the Iraqi government and the U.S. government informed of the details and the time of their transfer and their place of resettlement.

Similarly, in the years 2010-2011, the Iranian regime’s hirelings were stationed beside Ashraf for 23 months under the pretext of residents’ families and were busy psychologically torturing the residents round the clock with 320 loudspeakers.

The transfer of these hirelings to Camp Liberty gravely violates the Memorandum of Understanding (MoU) signed between the Government of Iraq and the United Nations on 25 December 2011.

Moreover, the Special Representative of the Secretary-General for Iraq repeatedly ensured residents’ representatives on behalf of the Iraqi government that Iraq would not allow these hirelings to travel to Liberty.

On 15 October 2012, in response to a letter by Liberty residents’ representative concerning the transfer of regime’s hirelings to the camp, Deputy Special Representative of Secretary-General for Iraq wrote: “They [Iraqi officials] categorically denied that” Further, I can assure you with absolute certainty that UNAMI is not ferrying anybody to Camp Liberty under any guise.”

Since November 2014, in dozens of statements and letters to U.S. and UN officials, the Iranian Resistance has warned that the Iranian regime is poised to repeat the Ashraf scenario to transfer MOIS and terrorist QF elements under the cover of residents’ families. Regretfully, no effective action was taken to foil this conspiracy.

The Iranian Resistance highlights the repeated and written commitments of the United Nations and the U.S. government regarding the security and wellbeing of Liberty residents and requests immediate action to end the psychological torture of residents under the pretext of “family” and to move away Iranian regime’s elements from the camp who are there under whatever pretext.

In 2012, the story Qods Force Plan for Psychological Torture of Liberty Residents. It was reported:

According to reports, mullahs’ intelligence intends to continue dispatching agents to Ashraf as long as PMOI members are present there. At the same time it plans to provide required facilities for stationing them close to Liberty. The Iranian regime’s embassy in Baghdad has set up 6 trailers in one of the bystreets adjacent to Liberty. Based on the plans, this location would be ready by November and the regime’s agents will be stationed there afterward.

The embassy plan is to transfer agents from Iran to Iraq and stay in a hotel in Baghdad. From there, they would go daily to these trailers in order to go to Liberty’s entrance with the company and protection of Iraqi forces.

The presence of Iranian agents at Liberty shows the Iraqi government continues to advance the inhuman and suppressive demands of the mullahs’ regime against Iranian dissidents.

The Iranian dissidents are under the protection of the Fourth Geneva Convention.