The National Council of Resistance of Iran issued a statement reporting that Iraqi forces and militants, stationed in Camp Ashraf (Diyala Province) from 2012 onward after the transfer of 3,000 Iranian opposition PMOI members to Camp Liberty, have destroyed the Ashraf cemetery which was very dear to the residents.

The NCRI statement pointed out that Camp Ashraf has become the command headquarters of Hadi Ameri, a leader of militant groups associated with the Iranian regime and Quds Force commander Qassem Suleimani.

The destruction of this cemetery in Ashraf took place under Ameri’s orders.

More than 100 members of families of those laid to rest in the Ashraf cemetery are currently living in Camp Liberty, where they rallied and protested this inhumane measure.

Asefeh Imami, a young woman amongst the protesting residents with her father, said: “My younger brother, Hanif, was murdered in the Iraqi forces’ 2009 attack against Camp Ashraf, and we buried him in Ashraf’s cemetery. Ever since we were forced to transfer from Ashraf to Liberty, I wished to return one day to that cemetery and pay my respects to my brother. However, Iranian regime-linked militants destroyed his grave, which is condemned by all religions and cultures across the globe.” 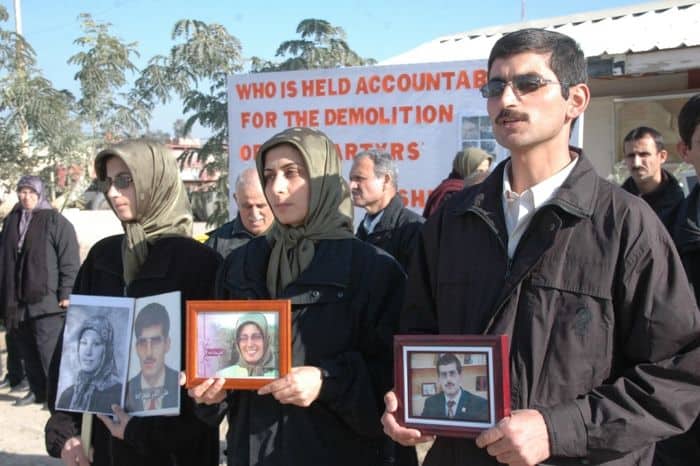 Farshid Madadzadeh, whose sister and brother were killed in two previous Iraqi forces’ attacks against Ashraf and were buried at the Ashraf cemetry, says: “Such inhumane behavior only reminds us of the actions of the regime ruling Iran, which constantly destroys the graves of martyrs and prevents the gathering of family members and friends at cemeteries in Iran. What has now taken place at Ashraf is an imitation of that anti-Islamic culture of the mullahs in Iran, which has been carried out by its elements here.”

One of the participants in this gathering said: “When they do such things to the graves of our martyrs, imagine how great the threat of an attack and massacre against Liberty is. It was just last week that the conspiracy to carry out recon missions by suspicious individuals at Liberty was exposed.”

The mother of a martyr said: “Our representatives have time and again called on UN and US officials to make arrangements for the graves of our deceased at Ashraf to be protected and taken care of at our own cost, yet we have seen no action by the UN or UNAMI.” She stresses that in response to the protest of the Liberty residents’ representative, the Deputy SRSG wrote to the residents on 7 December 2012: “Desecration of graves is unacceptable and if anything like that happened, we will raise our voice. I trust that the Iraqi authorities will respect the sanctity of the graves of your fallen ones..”

So far, none of them have raised their voices. Not the UN, not UNAMI, not the USA.

In this rally the families of martyrs buried in Ashraf’s cemetery called on the US government and UN Secretary-General to take urgent action preventing the trend of these inhumane and immoral measures, and to guarantee protection for Liberty based on their legal and moral responsibilities.